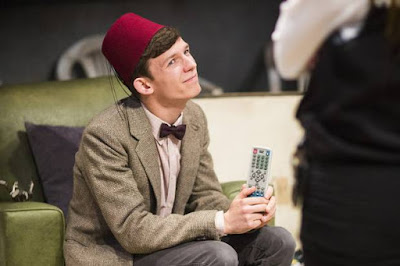 The contrast between Gary Owen’s recent Iphigenia in Splott and Violence and Son is stark. The former leaves you, yes, wrung out, but angry and energised. The latter leaves you, what? It feels like the only real response is head-in-hands concern at the sheer bloody awful state of men in British society.

There are two ways to write about V&S, one would be to not give away the plot points, to dance around what happens in the piece, and to try to have a discussion about the issues it raises and the means by which it raises them, while somehow not saying what they are. I imagine most of the *proper* reviews will have done that. [Billington, probably.] Since I’m not bound by a word-count, or an obligation to do it *properly*, I’m going to say exactly what happens after this photo... 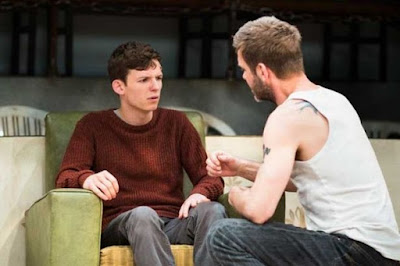 In the first half, 17-year-old Liam (David Moorst) returns home to his dad’s working class Welsh flat – a beautifully realised low-walled circular pen, channelling Miriam Buether’s set for Cock – with his friend Jen (Morfydd Clark). He is dressed as Matt Smith’s Dr Who, and she’s dressed as Amy Pond (notably, in the policewoman stripogram(sp?) outfit Pond is wearing when we first meet her as an adult). He’s edging round that staple of teen rom-coms, the best friend who wants to be something more. The corner Jen’s been put in by Gary Owens is that she’d quite like to go out with Liam, but already has an attractive, rugby-player boyfriend with whom she has less in common. And is hmming and haaing. Their awkwardness is soon compounded by the sound of Liam’s dad Rick (Jason Hughes) (or “Violence”, “Vile” for short) and Suze (Siwan Morris) having sex in the next room. Unlike witty, geeky, apparently gentle Liam, Violence is hard-drinking, frank, sexist and, well, has a reputation for violence. The first *obvious* #TalkingPoint is that he recently broke the jaw of a “retard” (Rick, p.49)/“man with learning difficulties” (Liam, p.50/Jen p.51), who had been touching up women (some “really young, like fifteen”) in local pub the York. A local pub which has a reputation for women being sexually assaulted generally. The first issue on the table is a standard response to violence solving nothing, and why didn’t you just call the police? To which the response is asking Jen whether she ever calls the police when she gets groped in the York. Liam’s, almost undetectable response is to wonder why women would even go there, and Jen’s response is the free drinks. It’s a miserable and grubby picture of the world, where men are somehow helpless slaves to their misogyny, and – the implication is – women put up with it in the name of enough free booze to forget it. “Nice guy” Liam’s instinct to blame the women is no less troubling than Rick’s carefree world of jaw-breaking without due process.

#TalkingPoint number two arrives in the form of a scuffle in which Liam, having wound Rick up (not an excuse, let alone me victim-blaming, but you want context, right?), gets shoved into a wall, and ends up concussed and bleeding. The alacrity with which Suze believes Rick’s somewhat toned down version of events, contrasts with Jen’s excellent but impracticable advice that Liam should walk out of this clearly abusive relationship right now.

Calling the third major plot point a talking point would feel entirely disgusting – although, at the same time, given *that this is a made up story* (important to remember with plays, no matter how much they reflect the real world), and one that feeds the bit of theatregoing culture of treating everything as a #talkingpoint (as opposed to the ineffable, the sublime, and art which passeth all understanding), it would also be true. Liam rapes Jen.

He’s been thumped. They’re edging toward a relationship. She accepts to stay the night and suggests it would be nice to “cwtch” (Wales’s favourite word: “cuddle”) before they go to sleep. He then, in the morning, claims he didn’t hear her say no. Twice. We might even believe that he honestly didn’t hear. Which is no excuse. But we also see his mortifictation. (These really are bloody excellent performances. This is yer proper realism at its best. The sort of thing where you really forget that it’s not real, and instead of thinking about the “acting” start actually analysing bodily and facial tics to see if *a character* is lying. I mean, it really is beautifully done. Hats off to Hamish Pirie and his cast here.) Maddeningly, though, when Jen asks him to at least apologise, Liam turns on her and makes the age-old, sickening male response that she was somehow responsible. It feels like a cruel thing for the playwright to make him do. We might have hoped for more from Liam. Although, cleverly, I think, the signs were all there. The bitterness, the chippiness, the resentfulness; and yet the judgemental attitude (cf. “why do women go to the York?”, not “why are men apparently incapable of not sexually assaulting women?”). And, of course we can see the parallels between his own situation – his own powerlessness, and his own victim role; even his in-denial-ness – and the violence that he has now committed. What's much much more frightening is the way that Jen has already, at eighteen, internalised an entirely unspoken threat of violence, even from this ineffectual, weedy little bloke.  Like, Jesus Christ.  What kind of a hellish world is it where that is instinctive behaviour? (Well, this one. Duh.)

This is a fiercely intelligent play. It might feel perhaps a teeny bit schematic – I guess anything that sets out to explore male violence and rape over the course of 90 minutes using naturalism is going to (real life has an annoying habit of not setting itself out quite so neatly, in terms of themes) – but you can forgive the structural sign-posting for the searching intelligence here. I think it’s also important to at least flag up that this is not a play that seeks to make entertainment out of rape. If one has any belief in theatre as an important part of a society thinking out loud – a tool of democracy and culture – then this play, even though written, directed and designed by men, and with an all-white cast, still feels like an important addition to the conversation.

Perhaps the real brilliance of it is the way that it subtly flags up over and over again just how prevalent misogyny is in our culture. From the superficially sweet off, where Liam is dressed as Dr Who, we are uncomfortably reminded that even with this tea-time favourite, we are still required to politely overlook Stephen Moffatt’s raging sexism, like a Very Drunk Uncle at a wedding. Like Karen Gillen’s first Amy Pond costume – not Jen’s dressing up as her – what even was that? And Liam’s fey “nice guy” persona reminds us chillingly of Elliott Rodger’s murderous, misogynist diaries (digested read: “But I’m such a nice guy, and if women can’t see that and keep going out with assholes instead – the whores – they’ll be sorry”). The final moments, the idea that Rick would threaten Jen out of pressing charges, the father-son not-reconciliation, but instead perhaps symbolic engulfment – the final line, spoken as an embrace, “Daddy’s got you” *obviously* echoing more as a terrible prophecy and comfort – do feel forced. But at the same time, not untrue as an analysis of just how awful a force masculinity is.

Interestingly, my first point-of-comparison for this play was Jack Thorne’s Stacey, which was also directed by Hamish Pirie, starring, blimey!, Arthur Darvill (who, obviously, played Amy Pond’s husband, Rory, in Dr Who). (Maddeningly, the only review of that show I can find is by the idiot Philip Fisher who, terrifyingly, seems to think that the play was about whether or not the character has murdered someone, not that he’s just raped someone.)

I'm prepared to believe that these facts are entirely incidental.

I agree, it's a gutting play. The fact that is was written and directed by men makes it that much more important. It's rare and bracing to see men analysing gender from outside the usual defensive postures. The performances are huge. Jen's final pleas to Liam are heartbreaking. Only Suze feels overly convenient, morphing to serve whatever emotional beat suits the scene. The others are fabulous. I was at the matinee today and they got a standing ovation - well deserved.