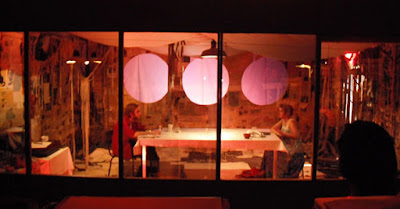 Following on from the mad Slovakian epic, Nevesta hôľ, Ubik Group from Théâtre de Liège’s Pourquoi Eve vient-elle chez Adam ce soir? is the perfect theatrical palette cleanser. Short (1hr), light, fluffy, funny, stylish, sweet, but with enough content to keep the brain properly engaged, it’s exactly what you need after 3hrs30 of *proper*. (It would do brilliantly in a late-ish slot at Summerhall during the Edinburgh Fringe, for example.)

The set-up feels quite familiar: we the audience are seated (in the SND’s *brilliant* studio space) facing a small room. It has a fourth wall with mirrored windows, so we gaze at our dim, slightly warped reflections waiting for the thing to start. Lights up inside the box reveal a man sitting in a cluttered room, the walls absolutely plastered with photos, posters, newspaper articles. From my seat I can only see the right hand wall: a picture of Lenin, a poster for Tarkovsky’s Stalker. Stage Left, indeed. Apparently on the other side are Nixon, Americans, etc.

The man’s thoughts speak to us in voiceover. He’s telling us that he likes cold coffee but also hot coffee. We’re instantly reminded of the French language’s ability to make the most banal thought sound like elegant philosophy. Indeed, I do wonder if a lot of the charm and fun of this piece for me is just the simple mismatch between the Pooterish, pedantic English voice reading the surtitles in my head, and the cool, louche Frenchman speaking. Whatever it is, it’s very funny.

Also: arty. We’ve got the alienated performer behind a see-thru fourth wall (cf., oh, so many things), and also the recorded voiceover – later, also mimed to, and then sometimes replaced with microphones and live speaking (in a theatre. People actually speaking live! Imagine!) – reminding us, perhaps, of Susanne Kennedy’s glorious oeuvre. The programme notes told us that it is inspired by the works of Michail Bulgakov, Woody Allen, Andrej Tarkovsky and Ingrid Bergmann [sic – and, given an obvious allusion to The Seventh Seal, wrong]. It’s a great reading list, but not one where I’m going to get many trainspotting points for picking up the references, annoyingly. That said, having known the list going in – and for some reason, having mentally added David Lynch to it – it also occurred to me that it would be especially funny if what the voiceover of the man’s thoughts was saying was taken from the neurotic thought-processes of a Woody Allen routine. Something like “Jean Luc-Godard’s Annie Hall”...

There isn’t *a plot* so much as a series of routines. A woman turns up (set, written and directed by Cyril Aribaud, Emilia Tillberg, Ya’l Steinmann, Anja Tillber and Sylvain Daï – also performed by the last two) and quirky, perky, movie-referential dialogue ensues. As does a rather lovely Bollywood pastiche dance sequence. There is, in short, *much silliness*.

In terms of *analysis*, as you might have guessed, I haven’t got a lot. A motif that did catch my attention was repeated references to an owl. This is probably lifted from something else, that I haven’t seen – I was hoping Twin Peaks, but probably not.

The ending is strangely beautiful and calm. Having earlier twice discussed the a theory of Timothy Leary (“Did you know you have 6 to 12 minutes of brain activity after everything stops? A kind of a conscious dream. It’s infinitely longer than one second in the state of awakeness. For example, I wake up at seven, then I go back to sleep and have intricate dreams that seem hours long. Then I wake up again and it's one minute past seven. That few minutes of brain activity could be your entire life. You are that old man who’s looking back...”) at the close, the man, Adam, offers his own kind of brain-life at the point of death soliloquy:

“I walk through the door

A big owl is watching me

I’m in a forest and there’s nothing

Only the forest and the owl

That’s it, in the end

I’m walking and then

I can’t hear my footsteps any longer”