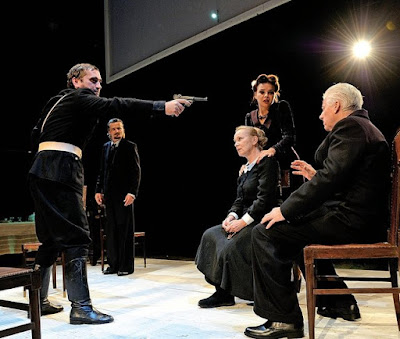 After the first three Slovakian plays – Ridge, Wife and Prophet – particularly given the work programmed from elsewhere – Young Stalin, The Stone – it was starting to feel like there was a bit of an elephant in the room – a big WWII elephant wearing the uniform of the Hlinka. Polnočná omša (Midnight Mass) tackles the elephant head-on.

Going in blind – not knowing when it was written or that the elephant was the subject – it starts off looking like your bog-standard, post-Ibsen family drama. In Tom Ciller’s design, the SND’s wonderfully adaptable studio space is bisected by a traverse stage with two gauze walls, meaning that we can only see through our own 4th wall to the plain room – a simple wooden table surrounded by chairs and two doorframes left and right. A mother and father chunter about while their son and his wife (although she calls his mother “mama” and might as well be his sister until about three quarters of the way through...) bicker. It’s Christmas eve and there are clearly a few unspoken tensions bubbling around under the surface.

It’s the moment when one of the other sons arrives home that a source for all the tension becomes clear. He throws off his coat and we see that he’s wearing the Hlinka uniform. It is, for the record, a properly brilliant, chilling reveal. As a set-up, it feels pretty promising, but somehow Peter Karvaš’s script blows it.

I happened to see the play the day that the reviews for We Want You To Watch came out and part of me wanted to sit everyone who said something like WWYTW “triggers a debate that it doesn’t fully articulate” down in front of this to see where that line of reasoning could get them. *Except*, there’s nothing actually wrong with the ‘argument play’ done well (Copenhagen’s pretty good, right? That sort of thing), WWYTW was just a different thing.

However, without wanting to be *that guy*, Midnight Mass, failed for me because it falls right down between the two stools it might sit on. It’s a family drama where we just don’t care about the family, OR, an argument play hamstrung because it feels that Karva has taken pretty much every possible argument on the spectrum that Slovakia had in WWII and has made up a person in the family to represent it. Shoutily. But somehow bloodlessly and undramatically. There’s the fascist son who’s been out in the fields murdering Jews. There’s the mother who is also a fascist supporter, but who doesn’t actively take part in their activities, and finds murdering Jewish children *maybe a bit much*. There’s the ageing father who plays up his deafness to avoid even having to confront what’s going on at all. There’s the young wife who’s pleased to have been given a formerly-Jewish-run sweet shop to run. Her husband, the stay-at-home communist who *really disagrees* with the fascists – big whoop. And then, finally, there’s the ultimate source of conflict: the family’s third son, a partisan hiding out in the forests – except he’s not hiding out in the forests because the Slovakian winter has brought him down with a likely-fatal illness. He’s in the family woodshed and urgently needs medical attention. Then, blimey! [Hlinka son]’s German superior pops by to be the unexpectedly urbane and pleasant Nazi who, nonetheless, follows orders.

Even relating the plot it sounds more exciting than potboiler-y, but here the practically melodramatic level of ACTING and SHOUTING!! makes it feel much more so. Added to this is the fact that the only real dilemma being discussed here is whether blood is thicker than ideology. And, inevitably, it isn’t really. There’s a strange scene toward the end where the whole piece comes over all A (Nazi) Inspector Calls, where [German officer] has collected the family Marple-like in their dining room and delivers a synopsis of their moral misdeeds. As a device – and possibly as a scene in a better play, maybe even in a better production of this play – it might be rather good. Here, it felt almost uncomfortably comic. [German officer]’s judgement is compounded by the finest moment of the play – its climax: Partisans have liberated the town with recorded gunfire. They burst into dining room to see the wretched family sitting around and the woman leading the freedom fighterrs says one word: “Fascists” and points her gun. After two hours something, it would have been quite cathartic to see her actually machine gun them all too. Loudly. (Only the characters, not the actual actors, it wasn’t *that* bad). Sadly it’s just lights down and applause.

But, yes; this feels like an urgent dramatic play undone with too much melodrama, too much arguing, not enough at stake to care about, and incredibly weak characterisation (onm the part of the writing). Of course, I say this, flinging reasons for things not working around like I have the faintest idea what it would look like another way. Perhaps the biggest frustration with this production wasn’t that it was bad, but that it was so close to brilliant – just viewed through a frustratingly frosted lens.
Posted by Andrew Haydon at 11:39

"Perhaps the biggest frustration with this production wasn’t that it was bad, but that it was so close to brilliant – just viewed through a frustratingly frosted lens."
Very good observation! The director claims that he doesnt want to add his own interpretation, the text says it all. And I say this leads to sterile performances.