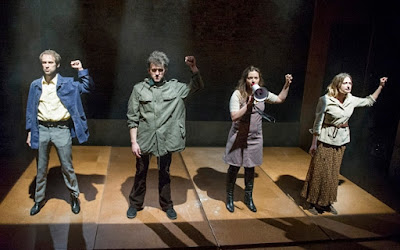 Because the last few James Graham plays have fallen into enemy hands (lol, jk), I haven’t seen anything by him on stage since 2010’s The Man, which I thought was totally charming. And before that, before the meteoric rise and all the telly, I’d rather liked the two Finborough plays I saw, Sons of York and Little Madam. And, it’s these, I think, that probably hold the key to what’s going on in this 2hr30 piece (with a twenty minute interval, it’s better to think of it as a 1hr10 play and then a 1hr play).

The Angry Brigade is another of Graham’s slightly wonky theatrical history-lesson plays, this time – in James Grieve’s production for Paines Plough – revisiting the facts of early seventies posh English anarchism though a dialectic between Branch (the police) and Brigade (Angry-), represented by playing off a loving pastiche of a student production of an Orton farce against a student devised piece inspired by Oh, What a Lovely War.

There is, in theory, a sound textual basis for this. Early on, one of the coppers notes that the AB have been mainlining Guy Debord’s La Société du spectacle. As such, proto-postmodern pastiche is as good a way as any to try and find a way into this fascinating period.

In practice this iteration of the production (it toured last year with a largely different cast, and from the look of the photos, a better version of the set) never quite lands. Whether in the first half where some amusingly *square* police try to investigate the (theoretically) groovy British anarchists, or in the second half, where we have our teeth set on edge by the irritating likely reality of a bunch of poshos spouting hackneyed revolutionary slogans in Hackney.

It struck me watching The Angry Brigade last night that Graham’s oeuvre increasingly resembles a kind of past life therapy for the English left (with a possible side order about the failure of theatre); a sense of going through all the previous traumas and fuck-ups one by one to see why it’s barely functioning at all at present. (And, if the same can be applied to theatre, perhaps there’s an implied examination of why “political theatre changes nothing”.) And it might well be this sense of, at best, therapy; at worst, a(nother) wake for English Socialism that makes the play so frustrating. But I think in a way the subject itself might be the cause of most of the dissatisfaction.

As a thinker, and I think it spills into the play itself, I get the impression that Graham is a sensible, moderate (to my mind) Old Labour type (by “Old Labour” I mean, the version of the party that last actually *opposed* the Conservatives, rather than offering some sort of sordid Thatcherism-with-Benefits). As such, on one hand he’s sort of ideally placed to point out the foibles of both sides – an amusingly Stoppardian police force, versus over-earnest public school radicals. But at the same time, both playwright and production sort of exemplify why the Angry Brigade failed to make anything like the same mark as Germany’s Red Army Faction or America’s Weathermen. Not, as the play seems to suggest, because the anarchists fell prey to their own inherent bourgeois Richard Curtis film tendencies; but because in Britain, apparently no amount of theory can overcome our class divisions. There is also, of course, the possibility that the Angry Brigade were likely every bit as inept as the play paints them. They were anarchists, after all, and not Marxist-Leninist like the RAF (who were hardly a model of eptness, anyway) or Weathermen.

More than this, though, I think the play feels frustrating, because its own form(s) struggle so hard with what it wants its contents to be and say. Both enterprise and analysis each acknowledge a problem, but are each then driven and scuttled by the drive to make jokes, be flippant, and entertain. It feels as if both theatrical form and political argument *want* to go further, but don’t want to alienate anyone with too much radicalism (either political or theatrical).

As a result, it feels like the second half, which explores life inside the Brigade – replete with Brechtian break-outs through the fourth wall and singing of popular TV advertising jingles to illustrate radical life within the society of the spectacle – almost condemns the politics of the group through insincere means of staging (as the means feel more like pastiche than commitment), while the suffocating nightmare of conformity is mostly achieved by having the set too small for the space (albeit in a bold move that risks looking like ineptitude, especially when the Bush’s perverse seating blocks and sightlines are brought into play), while the actual onstage action (again pastiche), ironically feels much warmer and more sympathetic to the police force than it ever does to the protestors.

Perhaps it’s because British drama has a much stronger, longer tradition of police procedurals, and essentially as a nation we’re actually quite fond of so much of our reactionary *stuff*, that trying to play off radicalism against a cosy sit-com is doomed to failure. It’s an interesting experiment of form and content, but when you consider it next to the genuine artistic risk of Caroline Horton’s Islands back in January, it looks, as '70s radicals might have put it, dead without even realising it.
Posted by Andrew Haydon at 17:13