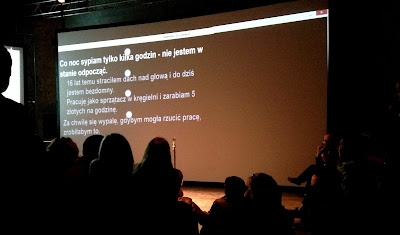 How timely that just as everyone in Britain starts talking about “community theatre” or “outreach”, I should see an example of what they’re doing with the same on the mainland.

And, dear God, it’s different. Actually, it’s not – you’ll see – but I honestly can’t imagine anyone ever making this show in Britain. Perhaps I’m wrong, though.

Edit Kaldor are a Dutch-Hungarian company. For the Inventory of Powerlessness here they have worked with local Poznań residents. I don’t know how the participants came to be selected, but they are about as diverse a group of the properly socially un-privileged as I’ve ever seen on a professional European festival stage.

The premise and proceedings of the show are incredibly simple. There are two mic stands, and the various participants take it in turns to go onto the stage and explain a time when they felt powerless. In doing so they often describe their circumstances – a mother whose child has been killed, a disabled man who’s lost his job, a man with specific learning difficulties or mental health issues that have also cost him his job, a single mother who isn’t making enough for food and electricity, two women with severe cerebral palsy.

Their stories aren’t a walk in the park either. After so many of them you really do wonder about other people’s capacity for – well, let’s not say “evil”, but – unthinking selfishness, sadism, and bullying the already-powerless.

“How’s this so different to the UK (or elsewhere)?” you ask. And, yes, in essence this isn’t wildly dissimilar to the concept of, say, Chris Goode’s 9. Or Stand, but with the original interviewees not replaced by actors, and their stories not edited and skilfully intercut, but constantly refreshed for locality. In theory, it’s not even dissimilar to The Last Witness – the Austrian verbatim/testimony piece made with Holocaust survivors.

What’s different is the tone and the emphasis. All it asks for is instances of powerlessness. And it gets them. And they are relentless. And there is absolutely no let up. And they are not stories told with self-irony, or humour, or a happy ending, or a lesson we can all learn from. It’s just the instance of powerlessness, be it temporary, ongoing – or in some instances – seen by the speaker a permanent.

Of course, *in theory* just the fact of this piece *could* be seen as empowering, but it feels more or less everything in the show’s dramaturgy conspires against our drawing this conclusion. We’re not told reassuring stories about the transformative power of theatre. We are simply sat in a theatre and told stories about profoundly powerful experiences of powerlessness without hope or redemption.

And it feels like it’s probably an infinitely more accurate representation of how people actually feel than the miles and miles of attempts to make everyone feel better and more empowered that we make in the UK. This, by contrast isn’t suggesting anything. It just explains, quietly and patiently, and with limitless examples, that the majority of people are powerless, feel that powerlessness, and are miserable.
Posted by Andrew Haydon at 15:38