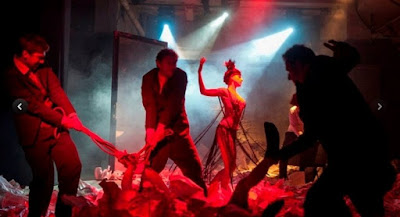 Do you ever get that thing while watching theatre when your expectations start (unaccountably) high, and the entire duration of the show can be traced as a steadily downwards-moving convex arc? Bláznove zápisky is a physical-theatre/clowning adaptation of Gogol’s Diary of a Madman, and, well, let’s charitably suggest that it was suffering *transfer difficulties* *at the very least* on Sunday.

Part of the reason for my high expectations was the collaboration between Kote Marjanishvili State Drama Theatre, Tbilisi, and Emilia Romagna Teatro Fondazione, Modena. It’s stupid to generalise about nations’ theatres, I know. But, nonetheless, I *really* like the Georgians, God bless ‘em. Somehow some of the most gifted, dedicated, talented performers I’ve ever seen (based on a sample so small as to be insignificant) hail from the former-Soviet republic. And I suspect, thanks to the work of Romeo Castellucci, I’ve actually seen a lot more Italian performers than I ever think I have.

But anyway, it was not to be. It seemed to start funny-and-charming, coasting on an incredibly high level of good will (and the hope that the previous night’s programming success would be repeated). But, gradually, the charm started to ebb away and the good will with it.

I could note that retaining the incidental detail that Aksenty Ivanovich Poprishchin’s hated boss is “a Jew” didn’t kick things off too promisingly (unless there’s production context there of which I’m unaware – Jewish director makes political point, for example). Or that, well – ok, this is *obviously* a story about objectification (or at least one could read it that way, in this production that aspect stands furthest out by a country mile), *but* no one had a gun to the head of director Levan Tsuladze *demanding* that he play up to it, did they? Yes, it’s a story about a anti-hero whose male-gaze we follow to the essentially powerless, voiceless woman (sure, she’s his social superior, and he ends up locked in an asylum), but somehow we’re sort of asked to condone his obsessive love here. Are we really meant to root for him in his unreasonable pursuit of this woman?

The company have done a pretty thorough job on transforming the original into their own thing, and for a while some of the physical theatre stage effects work well (although not nearly as well as in the spectacular photographs on the Kote Marjanishvili website and above/below – on tour, they’re much more in the tradition of likeably shambolic than precision-beautiful). Gradually, though, the slightly corrosive, wearying sexual politics, and the dragging out of the narrative do begin to grate. And then grate harder. And then harder still until by the end you’re actually quite cross. 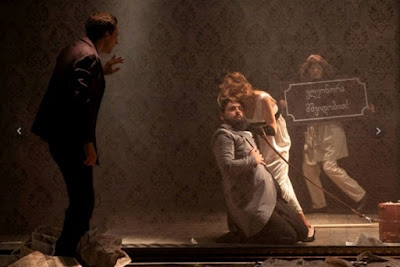 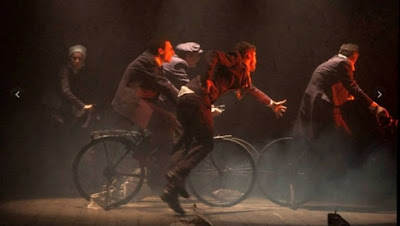 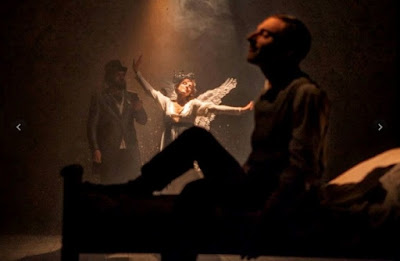 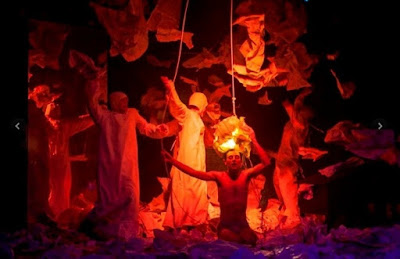 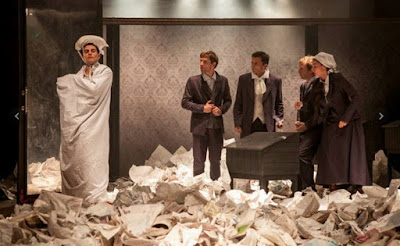