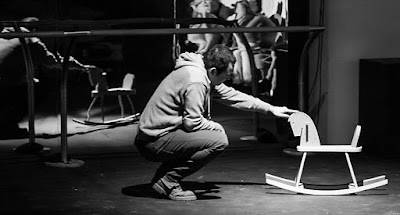 Verbatim drama is rapidly becoming *the* theatrical weapon of choice in Eastern European theatre, with Belarusia, Russia, Romania, and now Ukraine, all using the form to present urgent versions of events and give voice to those who would otherwise have none.

All of which puts something like Majdanské Denníky (Maidan Diaries) rather beyond the purview of ordinary “theatre criticsm”. What we can say is that director Andriy May and dramaturg/(we’d say author) Natalia Vorozhbyt have definitely created a piece of verbatim theatre. It is 2hrs long (with interval), and performed on a stage which is bare except for a small child’s wooden rocking horse and a mirror at the back – part because the company rehearsed in a ballet studio and got used to one and part because it reflects the audience back at itself.

They sing the Ukrainian National Anthem:

And the anthem of the EU (although without words. Surprised the below one has them, tbh):

(were I a music critic, I might have some stern things to say about the funereal pace with which they treated lovely Ludwig van...)

The Ukrainian, what? protest? revolution? in Maidan Square is one of those bits of recent European history that takes a bit of getting your head around. In the piece the company start by asking audience members [in English] “Do you know what happened in Maidan?” To be honest, just this question (or maybe, plus others like it) could form a whole show by itself.

The piece does give us information, although rapidly, so you’re required to be pretty cognisant with the facts beforehand. And there are very few facts, before the propaganda kicks in, from both sides (in real life, not in the piece).

“A period of relative calm in the anti-government demonstrations in Kiev ended abruptly on 18 February 2014, when protesters and police clashed. At least 82 people were killed over the following few days, including 13 policemen; more than 1,100 people were injured.”

The “at least” in the above-cited Wikipedia entry – and, y’know, why not Wikipedia? – is flatly contradicted on stage where the figure of the dead is set at at least 200.

The piece does not greatly concern itself with the wider facts, however. This is very much first-person testimony, performed honestly by the actors, who were also at the protests.  And, for the most part, the stories they tell are plausible, often unspectacular, vivid recollections.  It feels as if there’s been a conscious effort to avoid either too-cinematic a narrative arc, or too much sensational detail. Instead the stories feel varied and diffuse, and the piece feels more like it spreads gradually than “hurtles towards its explosive finale”.

The company do not appear to be fascists. Or in the pay of the American government (like the American government would ever fund theatre!). The piece steers entirely clear of anything about the subsequent civil war in Ukraine, and has even less to say about Russia (topically, David Cameron is in Bratislava right now, apparently, having a meeting prompted by precisely this Russia question). There is a point where one of the actors asks – I’d have thought the (unseen, unstaged) interviewer, but people in the audience replied, affirmatively – is it ok if I speak Russian?

Indeed, the conclusion of the piece – yes, funny to think about verbatim theatre having “conclusions”, but – the last word, is given to someone who pins their hopes on communism, international brotherhood and love; the things he experienced first-hand for the first time in the square.