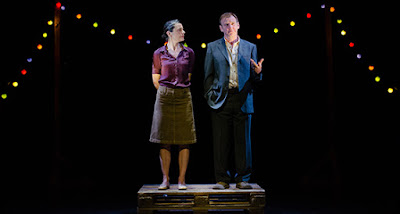 After a week of mostly big state-theatre stuff in Bratislava, mostly performed in a range of languages of which I speak not a word, arriving in Poznań, and wandering into the small studio space of the New Gazownia Pavilion – a weird futuristic little white lump of a gallery/arts centre looking for all the world like it was just plonked down at the side of Ewangelicka street because there happened to be a vacant lot there – sitting down, and being confronted with two people speaking English on empty stage decorated with a few coloured lights was a bit like being given a massive hug.

Or, looked at another way: like being given a nice crunchy salad after eating risotto for a week. Don't get me wrong, I like the risotto. It frequently tastes great. There are often more prawns than you expect. I’ve got nothing against risotto at all. But, well, after a week of comforting fattened rice, fresh green stuff is pretty damn exciting.

So, yes, here I am in Poznań experiencing something that feels like a really bracing cuddle.

At the same time as feeling friendly and familiar, Forced Entertainment have a brilliant knack for making you think hard about not-always-comfortable-things. The subject of Tomorrow’s Parties is *The Future*. It’s constructed so that it *feels* like a sort of improvised game; the two performers – here Richard Lowdon and Cathy Naden – start their sentences with “In the future...”, or reply “Or...” before launching into long, short, likely, unlikely, detailed, sketchy possible futures.

Some of the scenarios are dystopian, invoking horrible wars, used-up resources, police states, corporate state, and some are ridiculous (“In the future, people will have surgery to make them better at their jobs, like screwdrivers instead of fingers” – catastrophic paraphrase). The “Or...” tends to carry on or reverse these trains of thought. Sometimes with whimsical curveballs, sometimes with flat contradiction. The distance of the futures is also uncertain. Some are near, some are far.

There’s an interesting thing, that some of the futures – the more likely-sounding ones (“In the future, it won’t be all that different. All the stuff that’s already here, most of that will still be there...” paraphase) – are both depressing and comforting. What do we really think about the future? Is the looming environmental catastrophe, all the shortages, all the wars, are they going to happen in our lifetimes? Or the lifetimes of our friends’ children? Or is that war with Russia going to kick off before Christmas, as our friends in Eastern Europe seem certain it will. Or will we just about dodge all the shit that’s coming? Will our generation’s biggest battles be online and mostly concern interpersonal relationships? Are we ever going to solve inequality? Etc. etc.

It’s big stuff, ferried in so lightly and amusingly that you often don’t notice that the issue’s been raised until you find it sitting on your conscience a few minutes later and wonder how it got there...

It’s not strictly relevant to this review, but it was interesting the effect of seeing precisely (or near-precisely. Or, what I assume was near-precisely) what Cathy and Richard were saying in Polish projected as surtitles above them. It does completely remove the illusion of spontaneity and, at the same time, make you realise just how good a pair of performers they are.

Also not remotely relevant, is thinking about what, then, makes this piece so qualitatively different from the stately state theatre in Bratislava – much of which I did love, lest we forget. I do wonder if the biggest thing is the (seeming) lack of an overarching narrative. But then, the game it plays with presence, directness and performers “being themselves” also seems relevant. Doubtless I’ll have more time to think about this in the coming week.

Absolutely of no relevance whatsoever is that fact that Cathy and Richard rather reminded me of a younger version of my mum and dad, or of nice teachers giving an assembly. And I reflected that it’s quite interesting when our foremost “radical, avant-garde performance company” have been working together for over thirty years, since they were in their early twenties, and don’t seem ferocious or frightening any more. (Not that I saw them thirty years ago. Perhaps they were never scary?) And why do/do we expect our avant garde to be frightening anyway? And what’s a better word for avant garde.

In the future I will have stopped writing this thing, that used to be a review.
Posted by Andrew Haydon at 16:02