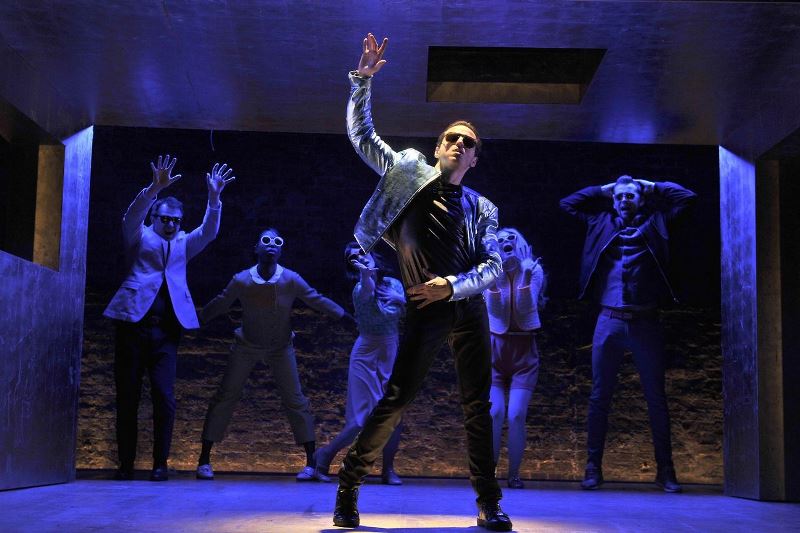 The problem with knowing Simon Stephens quite well is that it gets more and more difficult to write about his plays from the usual critical perspective. You know: turn up, be surprised, try to figure out what it all means, write it down.

So: I think I first came across “Birdland” talking to Simon about the possibility that he might do an adaptation of Brecht’s Baal. He also told me that Sebastian Nübling had suggested to him that he write an adaptation-for-stage of Mötley Crüe’s rock‘n’roll memoir, The Dirt. Birdland is the bastard offspring of these two impulses. Possibly six months or a year later I read an early finished draft of the play – still, then, vacillating, between the titles “Birdland” and “Cocksucker Blues” (the title of a bootleg Rolling Stones film).

And so that was the information with which I watched it, too.

To be honest, I also went in with a fair amount of trepidation. Reading the script, I hadn’t really been able to imagine Andrew Scott in the title role (ha! How wrong can I be? Totally wrong!), and – with the possible exception of Blurred Lines – most of the work I’ve seen by director Carrie Cracknell had tended toward toward beautifully realised realism, which I worried might cause problems to a more fluid script (I really should have more faith). Also, watching Birdland the night after Ivo van Hove’s A View From The Bridge, well, you don’t expect to get quite that lucky twice in a week, so I was expecting some diminished returns. Good, but... kinda thing.

Just as with a rock band, it’s impossible to really pin down where the real driving force is coming from. Is it Cracknell’s endlessly inventive staging? Ian McNeil’s constantly moving, changing stage design? Is it Stephens’s restless, relentless take on the Stationendramen? Or is it Andrew Scott’s tour-de-force performance as Paul, the frontman of an unnamed, unheard band as they make their way back across Europe from Moscow to London in the last days of a global tour?

(And, yes, the ensemble, the light and sound design, and doubtless the invisible-but-flawless stage-management.)

Because I knew this script was based on Baal, I think I might have worried much less about “the plot” than other critics (and, indeed, having read it anyway, like some sort of German, knew what was coming). Knowing there’s *source material* is an interesting experience. The end of Baal is a bit of a mess, it sort of just trails off, as if, after an initial burst of gusto, Brecht tired of his character and started letting him just drift a bit. On the other hand, that’s how this sort of trajectory operates. I have a bit of a thing where I far prefer the first halves of biographies where whoever worth biographizing is putting together all the things that make them great. The second half where they inevitably fuck everything up always appeals far less to me. Ironically, this is *all* second half. In theory. Actually, being a play, Paul/Stephens has to pull a load of stuff together in the first few minutes of the play in order to make us care about what we have to stick with for the next two hours (no interval). And he does, the situation is admirably set up, Paul is greedy, capricious, and very, very rich. He can do what he likes. And he’s fucking bored. His guitarist friend Johnny (who seems to be both Johannes and Eckhart from the original) is looking on annoyed. (And a bit annoying, with his new girlfriend who he’s mooning over.)

It’s perhaps where Birdland departs from Baal that it’s at its most interesting and significant. Stephens has added a scene where Paul is reunited with his ageing father. It’s arguably one of the most emotionally charged scenes of the play, and it’s, of course, where Paul has returned *home*. His father’s small pride that his son’s latest record has received a four-star review in the local paper is almost devastating in its simple pathos; his father’s debt of a thousand pounds which his son dismisses as “nothing”, a sudden slap of normal reality in the face.

The way Stephens wraps up the ending is also interesting. There’s a kind of minor-ex-machina, sent by the wronged Johnny, who [spoiler] means Paul is suddenly facing statuary rape charges. His record company point out to him that – as in so many rock biog-catastrophes – actually, he’s not rich, it’s their money, and he’s quite profoundly in debt. (As Stewart Pringle memorably puts it in his review: “Paul’s decline could almost be a metaphor for the entire banking crisis… he is unwittingly an investment, he is rotting into the subprime. ”.) However, [more spoiler,] unlike Baal, Paul doesn’t die at the end. Stephens points to a world in which the sociopathic, the psychotic, and the charismatic can probably just keep on dodging the final curtain. That there can and will be a second, and most likely a third and fourth act for Paul. He’ll be able to keep on getting *something* (“what he wants” is wrong, because either he doesn’t know what he wants, or there’s nothing he really wants, or whatever he wanted he got sick of/from a long time ago) for a long time to come.

Cracknell’s production is an interesting proposition. I happened to watch from the front row of the balcony, which I’m tempted to claim (despite not having sat anywhere else) is the ideal vantage point. The choreography of the first few scenes especially – with all the players sat in blue plastic wheeled chairs – is beautifully realised, and it is immensely satisfying to watch the patterns their movements describe from high above. The whole is a gradual slide from slickness to mess, with the stage gradually being submerged in the inky black water with laps round its edges from the start, while scene-to-scene a golden flat-arch moves forwards and back to create different settings.

On one level, it manages to convince in the moment as the only possible way of doing it. On the other hand, there is a surprising total lack of any live music whatsoever. Admittedly, the script is the story of a rock star with *everything but the music*. But, y’know, they could have stuck some in anyway. Granted, music is plausibly even more devisive and theatre styles, and so deciding what Paul’s music sounded like could only really have alienated *some people*. But, well, hell, I like loud guitars and drums and I don’t think there’s much which isn’t improved by their presence. I wasn’t ever exactly sure how I felt about the bright blue leather jacket which Paul wears at the start, either, or some of the rather dance-y music played in the breaks, but, y’know. That’s just personal taste.

Cracknell’s staging is interpretative in much more interesting ways than this, however. In casting Andrew Scott, the production has foregrounded the charisma, charm and, let’s face it, good looks of Paul. Scott’s performance dwells on the contemptuous and the louche. Scott also turns out to be a pretty impressive dancer – a kind of Pina Bausch version of Ian Curtis crossed with Michael Jackson – in a few scene breaks. I could have watched a lot more of that. On the other hand, his cold stare eradicates the other aspect running through the script; the idea of Baal/Paul’s insatiable hunger. He is always eating. More and more. Other characters comment on it. The amount he eats, the way he eats repulses them. He’s putting on weight (Scott, really, really isn’t). He’s got fat. We go through the play watching the ghost of the original Paul in an environment that gets corrupted. We could equally have gone through watching the end result arrive at his final destination – and in a landscape of clinical modern hospitality suite after clinical modern hospitality suite. I’m not for a moment saying that would have been better – you pretty much can’t take your eyes off Scott, he is properly mesmerising and flawless as a performer, and the staging is sublime – but it’s interesting to observe that this is in no way a *definitive* production.

Beyond being a staging and an adaptation, though, what Birdland really is, is an evisceration of modern values and life under late-capitalism.  Of course, this is (ironically) where Stephens continually deviates most from Brecht. The trajectory and plot may be borrowed, but the conversations had in those situations are, even if mildly equivalent, entirely new.  In Paul, I think Stephens has found his most eloquent spokesperson yet. Because, obviously, having a character *actually talk about capitalism* – either saying what the author thinks, or otherwise – is a bit, well, *obvious*. Whereas having a narcissist who is obsessed with their money... Well, talking about *money* is different. And the way Paul talks about money is at once familiar and horrifying – at one point explaining that his music is now better because more people pay higher prices to see him play it. The logic of both bloated stadium rock and Tory arts policy in one dumb equation.
Posted by Andrew Haydon at 15:21

I imagine that 'statuary rape' would be pretty painful....

Typo aside, I think there's an even better production waiting to get out. Scott carries it devastatingly well and the direction has some nice ideas but I suppose I was hoping for a more dangerous take, as I think the text will allow for it. Is it slated for a European production at all do you know?