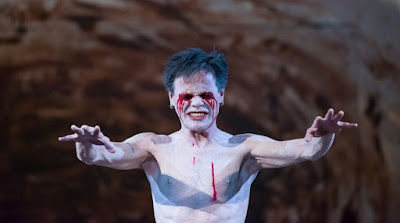 At bloody last! It’s so neat it might have almost been planned. Having been *interested* by both the means and subjects of the first four Slovakian plays, I couldn’t honestly say I’d discovered anything that I (and, yes, of course, entirely subjective) could really say I loved (ok, maybe I married a werewolf!, but more in a “blimey!” sort of a way than “here is my new Alles weitere...”).

Mojmír II. Alebo Súmrak Ríše (Mojmír II, or: The Twilight Of An Empire) is kind of amazing really. What it is, what it seems to be, is a play about Slovakian history – circa 893AD – made from a chewed-up, cannibalised King Lear threaded through some wild and rangy poetry of the author’s own. (I say “the author”. There is no author or playwright credited. There’s a director (Rastislav Ballek) and a dramaturg (Peter Kováč) and that’s your lot. Did they really make a text this lyrical and complex without a single living writer in the room? Consider me doubly impressed, retrospectively)

There are only four performers on stage for most of the show. An old man, a blind man, a mad-woman/fool/goddess and a bloke in a suit (Robert Roth, Emil Horváth, Daniel Fischer, Dominika Kavaschová – maybe in that order, but the English version  of the website doesn’t give character names, and I’d be pushed to say which character had which name anyway...). Towards the close, there’s also a life-sized skeleton marionette dressed as a priest (I think operated by at least Ivan Martinka, but also a.n. uncredited-other).

And it’s hard to think of anything that it’s like. The nearest I got was imagining what a young, violent Peter Brook might do with a Howard Barker assault on Sophocles. There is something here that feels at once elemental, atavistic, primal almost. Like the noise of language crafted into something that communicates well beyond the reach of actual language.

The performances are also all suddenly, totally, electrically, alive. There were long stretches where I clean forgot to look at the surtitles because I just want to miss what the actors were doing. Also interestingly, this being the nth piece by the Slovakian National Theatre repertory company, I’d seen all of them before in something else. I’d sort of taken on trust the idea that they were good actors, but, just delivering lines with conviction at different volumes is a completely different game to what was going on here. Instead of some fairly inevitable, standard, near-realist moves, here we have something like complete bodily immersion in a part. The blind king is stripped to the waist, sinews taut, screaming or shouting about the land and the soil as he makes his way slowly, tortuously round the outside of the stage – the studio is here playing in-the-round to a one-row-deep audience, pinned against the wall perched on wooden chairs. [actor] hardly ever opens his eyes – caked in died blood – as he feels his way with a white stick. Meanwhile, [female character name] – Dominika Kavaschová transformed from her role as the selfish daughter-in-law in Midnight Mass – writhes, stretches and prowls her way round the other characters like a wild animal possessed by evil spirits. As Lear’s fools go – and this is her apparent sort-of role (or at least its where some of her cannibalised lines spring from) – she is the opposite of subordinate, having eschewed weird puns for a full on exploration of her sexuality. (And, *I think* this piece pretty much bucks the hitherto observable Slovakian trend for “demure” female “role-models”. I’m not entirely convinced Kavaschová needed to do the last scene in her bra, but then, since most of the blokes are covered in mud, blood, and either nearly naked or dead by this point, it really doesn’t *feel* male-gaze-y, but whatdoIknow?).

Juraj Poliak’s design almost adds to this sense of near-primal fury. On the back wall of the long space there’s a painting that looks halfway between cave painting and dirty protest. There’s also a massive metal frame horses head hanging ominously above the stage, and elsewhere a deconstructed full-size rest-of-horse is wheeled about or a metal frame is saddled... At one end of the stage a metal garden chair is briefly a throne, while at the other a miniature church stands in for, oh, Christ-knows-what.

To be honest, I’m not even remotely sure I got close to the sense of it, but I’m not sure I could have done without a simultaneous translation earpiece (PLUS footnotes in the other ear).

There is one scene, late in the play, where we appear to have reached the present day – or at least the Slovakian/Moravian King of the moment is dressed in the pervasive modern garb of the grudging we-have-to-wear-a-suit-in-the-office suit, short-sleeved shirt and tie. And he rails and rails against Slovakia, against it’s place in Europe. Against its sense of inferiority. Against leaving the country and against not leaving the country. He’s feeding coins into a tiny Red London Phone Box piggy-bank that seems to be standing in for an actual call box. It felt (perhaps over-readingly) to me, like the most honest self-assessment by a country of itself that I’d seen all week. Even the Germans, for all their unending horror at the crimes of their grandparents, or great grandparents, have Kant, Hegel, and Marx, Bach, Mozart and Beethoven, of whom they can be inordinately proud. Here was a real sense of rage at a country that seemed destined to be an eternal underdog, to do or say the wrong things.

It’s always struck me that the true mark of integration into a place isn’t when you learn to love it, but when you can’t stop bloody moaning about it. That’s what belonging really means. Patriotism should never be about pride in your country, but disgust at it. The patriot who loves their country unconditionally is a fool, and might as well have been born anywhere. This was the play that actually started me thinking about “why nationalism anyway?”, “what is it even *for*?” “what does it achieve?”. And not before time, perhaps.

It strikes me writing this, that perhaps this should be the question asked by the next Eurokontext festival. This year’s edition did an admirable job of reframing, re-stating, and re-asking questions about nation and history. It would be exciting if the next festival were to ask “why nations at all?”