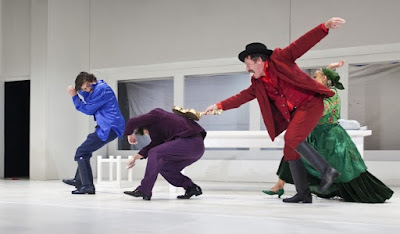 Cigáni – the translation we’re offered is “Gypsies” – is described thus in the festival programme:

“Thriving gypsy music, colourful costumes and wild dances between shots of plum brandy. The idyllic start to the play resembles famous Broadway musical hits. The story of a classic love triangle in the 1930s – when the Hungarians and Gypsies were able to live amicably side by side – changes to comtemporary documentary with Hungarians throwing petrol bombs at the Gypsies. In 2008 and 2009 there were a series of attacks on Roma settlements in the Hungarian countryside. Musical idyll can no longer be referred to in this influential, opinion-forming Hungarian theatre play that – as an aesthetically and stylistically pure staging – tells of the current Hungary, the rise of nationalism and ethnic hatred, and of a detective plot in a small town where it not easy being either white or Gypsy. A play about seeking out the origin of fear, a play about the dark depths of Hungarians, Gypsies and us Europeans.”

Quite a problematic document, no? The reality is worse.

I don’t know how much you know about Hungarian politics, but, well, they’re pretty fucked. I should say at the outset: I only know left-wing Hungarians and they’re all horrified and depressed by what’s happening to their country. So, this is by no means about *all Hungarians*. However, at present, and by democratic election, the country is ruled by Viktor Orbán’s Fidesz party – somewhere to the right of UKIP – often supported by the Jobbik party, who are somewhere to the right of the BUF (British Union of Fascists there. Singing their anthem, which is a direct translation of the anthem of the Nazi party, in case you were in any doubt about just how closely allied the two were). There are a litany of examples of how these parties are hideous (the one where an elected member of a modern European democracy in 2012 wonders if they shouldn’t start keeping a “register of Jews” is pretty special, for example), and if you’re not already actively concerned and outraged about this, and about David Cameron’s alliance with them in a right-wing coalition in the European Parliament, then do do a bit of Googling. However, this is a theatre review, so let’s look at the play – but not before noting how Fidesz has a nasty habit of firing artistic directors and appointing its own members to run theatres (imagine Katie Hopkins being put in charge of the National and you’ve got some idea where they’re at).

There’s plenty to raise concern in the blurb: starting with the idea of “an aesthetically and stylistically pure staging” (a stupidly naïve claim with fascist overtones) and going through to the nonsense that is “ the play resembles famous Broadway musical hits” (it doesn’t) “a classic love triangle” (if Run For Your Wife is a classic love triangle, sure) “the 1930s when the Hungarians and Gypsies were able to live amicably side by side” (“were able” is bad enough, but, 1930s? Huh? (“At a conference in Hungary in 1909 concerning the ‘Gypsy problem’, there were equally astonishing statements, that today in the light of history sound familiar. Once speaker said, ‘Every Gypsy should be branded so as to assist in identification’.” [my emphasis]), “contemporary documentary with Hungarians throwing petrol bombs at the Gypsies” (“contemporary documentary” in the same way that England People Very Nice was a documentary maybe?). Not to mention “a play about seeking out the origin of fear” – not much to seek out. It’s: “irrational prejudice. Racism”. Not much investigation needed there, unless you want to justify the racism. “Why are people being nasty to the gypsies?” the play asks. “Let’s look at the gypsies and find out” it seems to suggest. Just: no.

So, yeah. For the majority of the first half we’re shown a portrait of “gypsy life” in the 1930s (there is literally no way of knowing when it’s set, except presumably by the fact that the “gypsy” characters aren’t being enthusiastically loaded onto trains to the death camps, or having petrol bombs thrown at them). All the “gypsies” are played by (white, as if it needs saying) Hungarian actors. The portrayal of the “gypsies” is pretty much the most overtly racist thing I have ever seen. The sum total of the attributes we see them display collectively are: drunkenness, violence, lechery, dishonesty, and playing music. (Thinking about it, it’s basically Posh, but with gypsies – but then, imagine what Posh would be like if it was about a racial minority, played at a time when that minority were already being persecuted, and played solely to people outside that group...). The best I can say, then, of the first half of the play is that it *might* be intended affectionately and just winds up being racist by mistake(!). The second part – the “investigation” – basically consists of some racist policemen poking around in some burnt out housing.

It’s strange to consider that *I think* the intent here is broadly liberal, and concerned about violence against minority ethnic populations. It appears, however, that an uninterrogated, racist stereotype has still permeated the thinking here – not to mention an atrocious lack of *any* discernible theatrical talent or know-how whatsoever – with the net effect that this looks like nothing so much as a bigoted six-form revue. In short, you can’t make an anti-racist play by putting a lot of characters on stage and asking “who’d want to firebomb these fun-loving, simple, childlike folks?” Ironically, though, by pandering to these idiotic stereotypes, the piece ultimately shows us exactly why Hungary’s got a race problem: because it’s a way of thinking so ingrained that even liberal theatremakers trying to protest it can’t seem to think their way outside the rhetoric.

I should reiterate again, lest I be accused of bigotry myself, that in my personal experience, not a single Hungarian I’ve met has been racist. And every single one detests the government with a passion. “Echo chamber” maybe, but at least it exists. By the same token, Hungarians I know have been having a fucking hard time since Fidesz came to power. Everyone not hard-right in the arts in Hungary has. Perhaps ultimately that’s the source of this play’s politics – the fact that if you make a play that calls the government out, you’re effectively asking to be sacked, blacklisted, and unemployable. So maybe not everyone can afford to be brave. 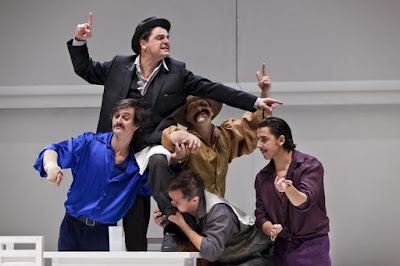