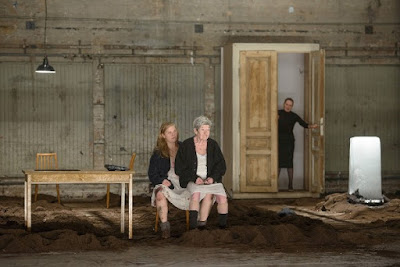 Ok, so I’m going to cheat. “The Celibate”, presented as the opening piece in Slovakia’s EuroKontext.sk festival, is in fact Ewald Palmetshofer’s Die Unverheiratete (from *German* to English, interestingly, “The Unmarried”), which I saw at Theatertreffen in May. And I don’t intend to re-review it *fully*, five weeks later.

What is fascinating, especially for a festival that has “context” in the title, is the extent to which exactly the same play and production changes, watching it in the main house of Slovakia’s National Theatre (*very* similar to the Olivier, which in turn was modelled on Epidaurus, right?). There was also the fact of my sitting in the fourth row from the stage here, instead of the back row of the gallery as I was at Haus der Berliner Festspiele.

The main effect I noticed of location on play is/was to do with the subject. Palmetshofer’s text relates the story of three generations of Austrian women: grandmother, mother, and daughter. In the last days of WWII, the grandmother betrays a deserting German soldier to the police (or SS?) and he is executed. The play intercuts her trial – told Martin Crimp-style, by a chorus of four more women – with her granddaughter telling us about various sexual encounters and her reading of a notebook the grandmother kept (during? After?) the trial; before the granddaughter’s mother was even born. There are also scenes of dialogue with the old woman in a nursing home.

Watching in Berlin, I suggested that the grandmother’s crime didn’t seem all that important in the grand scheme of the crimes being committed around her. Berlin isn’t a city that lets you forget what happened between 1933 and 1945 in Germany (and, from 1938, in Austria). In Slovakia – despite its own horrific war record – it feels much more possible to view the crime without the baggage of watching in Hitler’s former capital.

There was also the context of having seen the play before, and recently. As a result, this time I didn’t worry so much about trying to catch every surtitle in order to follow the story. And, interestingly, now knowing the basic shape of the play, its basic (if still slightly ambiguous) storyline, it was a much more relaxing experience. The brilliant and beauty of Robert Borgmann’s staging remained, but this time it felt possible to appreciate it much more fully. And also to rethink whether I really had a problem with the piece’s presentation of women. In this, it was interesting how much of an effect being close to the front had. Rather than *women*, one saw *individuals* much more clearly. Being able to see the faces of the four chorus members (they wear heavy whiteface make-up, and so presented almost no data to the back row of Haus der Berliner Festspiele) felt particularly like it changed one’s relationship to what they were doing. Much more detailed and less conceptual or impersonal. It’s interesting that, depending on one’s seat, both versions of this subjective reality feel absolutely true. Something we don’t get to discover all that often.

So, yes, an apt start for a festival named for *context*. 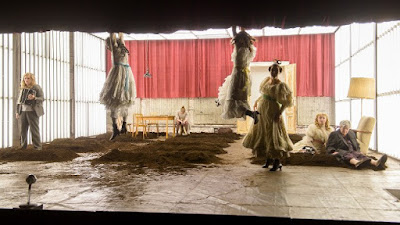 [oddly, the different seat also completely inclined me toward different photos to most accurately reflect what I thought I'd just seen.  Really interesting.]
Posted by Andrew Haydon at 09:51