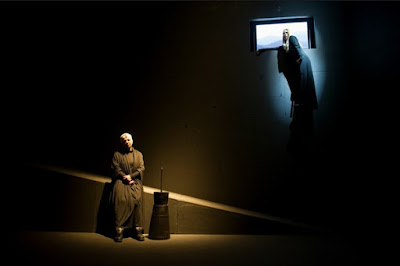 So this is interesting. I went into Bačova žena knowing next to nothing. I knew the title translates as “The Shepherd’s Wife” and that, like Nevesta hôľ, it was directed by SND artistic director Roman Polák.

I came out desperate to know when it was written. 1928, apparently (the same year as Journey’s End, Machinal, Pioneers in Ingolstadt and The Suicide). Apparently the play has some standing in the field of Slovakian dramatic literature, and, perhaps more pertinent to my understanding of this production (or lack thereof), has a considerable stage history, with productions exploring everything from and ethnographic to “symbolic pure, aesthetically clear emphasis” stagings. I would say Polák’s current production errs more to the latter end of this spectrum.

But. What was most fascinating to me here was just how much I Could. Not. Read. This. Production. Don’t get me wrong, I could see the perfectly serviceable English surtitles. I knew what was happening throughout – woman is told her husband (formerly a shepherd) has died abroad, woman marries again, woman's first husband was not dead, comes back to Slovakia, and has bought the estate on which she lived with him, and now still lives with her new husband (also a shepherd). Chaos ensues. She stabs herself and dies. End – No. It was the actual register of the production itself that was somehow just alien enough to completely throw me. I’ll describe it: on the large-ish stage of the studio (think: the Dorfman) there’s a high black wall only a few metres away from the front row, cutting off the whole rear of the stage. The wall is at a slight angle to the raked seating. Across this wall a slope runs down from left to right. There are guillotine-action doors through which the characters enter and exit. Occasionally retractable rungs glide out of the wall, allowing people to climb the wall.

The performers are all dressed in black and white. The men in contemporary shirts and suits, the women in close-fitting versions of peasant or nun costumes, their heads covered with something suggesting again the middle ages or a nunnery. The paintwork on the slope is scuffed and retouched. Is that a deliberate design idea or unconcern? Did it feel a bit wrong, nit-picking about that detail? Absolutely. I have no idea what SND’s annual budget is. How very Western to worry about a paint-job. But then, we do worry in Britain. This scuffed paint really made me think about sets I’d seen recently. The sheer flawlessness of the shiny glass number for the Almeida Oresteia. It’s all very well to bang on about needing everything you see on stage to be deliberate, but my God, how very spoilt we all are. How decadent to have *budget* being part of what we *read* on stage.

However, let’s leave that confusion aside for the time being, because I was being slightly inaccurate earlier. If I’d known where I was meant to be with the play, then I think I’d have known where I was meant to be with the production. And I did not know. You’ve read the précis, right? The language (at least in translation – so this could be no indication) seemed frank and without subtext. People explained what was going on to each other. The characters move the plot along in front of your very eyes, maybe only ever one step away from actually saying “Wouldn’t it be awful if [thing that happens next] were to happen”. And, for all my scepticism, I did find the honesty about how plots work quite refreshing and relaxing. None of that mad English desire to have everyone talk endless about tea with everything actually happening *in subtext*. Nah. “How do you know your husband died? You never closed his eyes yourself” is what we’ve got here. (Truly, a proper *translation* into the correct period English would have that line as: “Oh dear, Eva, you seem to have forgotten to pass me the marmalade. Don’t worry, I’ll get it myself now...”.)

[the acting, from what I could tell – and I was doing a lot of surtitle reading, don’t forget, so I wasn't always looking at it – was actually very fine. Committed, convincing, never less than entirely watchable...]

But, quite aside from production, dialogue and plot, there’s *meaning* to contend with. What the hell is the play *for*? Why’s it been written? This is something that’s been discussed a fair bit over the last two days, and the inescapable conclusion seems to be just a complete ideological divide between people who think what it says is beautiful, and people who think what it says is actually rather sexist and reactionary. The ending of the play essentially feels instructional. That titular shepherd’s wife, Eva, takes her own life, seems to be broadly smiled upon as a course to take – a lot like Luise Miller’s poisoned lemonade honourable suicide in Kabale und Liebe, a bit like Hedda’s tragic? romantic? pragmatic? desperate? suicide... *Obviously* this is problematic. Like, the poor woman has done *nothing wrong*. There are characters in drama who murder their children and get off lighter than this. She kills herself because she remarried after she was told that her husband was dead. And then he turns out not to be. Frankly, husband number one is a complete prick from the word go anyway, as is husband number two. In terms of where sexual politics are in the world of the play, the most telling scene is perhaps the one where the two blokes meet up to have a chat about which of them the wife should now live with. The wife is not invited to their little chat. I mean, really...? And all this is staged without irony. Or apology. Or any internal self-critique.

The programme of the Festival has this to say in the play’s defence: “This perfectly concentrated tragedy of this Slovak classic has inspired generations of dramatists... This intimate chamber drama features inherent encrypted archetypal elements, the characters are like cut-outs from ancient tragedies or the Bible. The potential of the dramatic template is still a potential discovery for the wider European cultural area.”

And, you know, I feel genuinely sad that I’m on the other side of this mental fence where I just can’t quite do the ideological gymnastics necessary to get over or around the fact that the basic deliberate premises and trajectories of the play are pretty much diametrically opposite to mine. At no point was I bored watching, I don’t even think I could say I disliked it. But at the same time, I was more troubled by- than at home to- the ideas.  I think "the wider European cultural area" might be best advised to ignore this "dramatic template". 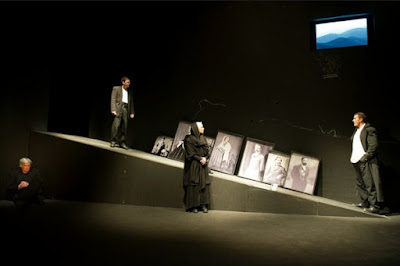 I think it´s my turn to "explain", although I believe you had a chat with some of the dramaturgs of the Slovak National.
The play is actually very good, but there was a lot missing from the origial text. It is inspired by expressionism and it is considered our first modern play and we call Eva antique heroine, or that her tragedy is antique. The tragedy is much deeper than you saw and the main decision for Eva is not which husband to choose. They blackmail her with her children, because each of them wants only his own child. That means whoever she chose, she´d lost one son.

And that is what inspired the director, to make it into an antique tragedy - you saw the sheperd on TV at the end, that was meant to be Deus ex Machina... But I do agree with you. When I saw it I thougt that the director was joking, I just wasn´t able to read the irony. But no, he was serious! So in the end what s left to say is that his concept of Antique tragedy didn´t work because it all looked funny. He even tried to experiment with the acting, but you can´t put masks on live faces, so they overacted everything, they were not able to keep one emotion as he desired.