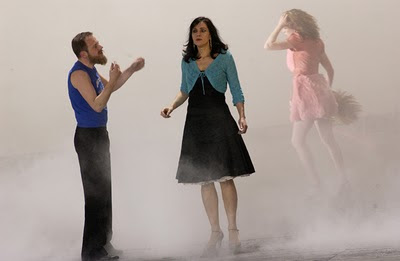 [On this day in 2008, I posted my review of Kenneth Branagh's Ivanov. Since I've had this review hanging around, unfinished, for about a year and a half, I figured, for a bit of circularity, I'd stick it up today to mark the occasion.]

In a recent [ha!] piece for the Guardian Theatre Blog/CiF (http://www.guardian.co.uk/commentisfree/2010/feb/09/beyond-theatre-boxoffice-stage-success ), which might as well have been entitled “And another thing...” , Michael Billington gets briefly exercised about “yet another myth currently gaining credence: that English Chekhov productions are full of swooning nostalgia for our own lost rural past”. “This is rubbish”, he claims.

I’m not sure who made the initial claim, but I tend to agree that British productions of Chekhov have precious little to do with British rural nostalgia; on the other hand, they do all tend to follow a certain pattern.

What I’m pretty sick of is writing disclaimers about the fact that just because I like German theater AS WELL, doesn’t mean I hate British theatre, but it seems like I need to keep reiterating them or British Theatre gets all hurt and whiny, so, for the umpteenth time, I REALLY LIKED THE KENNETH BRANAGH IVANOV. Got that? Good. Having said that...

Dimiter Gotscheff’s production of Anton Tschekow’s Iwanow is pretty damn revelatory. It premièred in 2005 and is still running in the Volksbühne’s repertoire five years later. And last night’s production was sold out.

I’m not going to pretend it isn’t a hard watch. Possibly for Germans, but certainly for Brits, particularly those without much of the language (i.e Mich). However, the imagination of the staging and dramaturgy goes a long way toward offsetting such concerns.

The best thing you can do before seeing it is taking everything you think you know about Chekhov and chucking it out of a high window. One of the ones at the top of the Volksbühne will do.

The staging is stark and simple. The absolute back of the Volksbühne stage is a curved sheer white wall, like a cyclorama, designed to improve the acoustics. Generally it is covered, curtained or obscured by the set. Here there is absolutely nothing decorating the stage, which is empty save for a low smoke machine at the back. Samuel Finzi, playing Ivanov, walks up stairs out of a near invisible trap door at the rear of the stage and stands against the back wall. Gradually the other characters join him.

He begins to walk forward. The smoke machine starts. The depth of the Volksbühne’s stage is quite remarkable. Deeper than, say, the Lyttleton by quite some way. By the time he’s reached the proscenium arch – and the stage continues for quite some way out in front of it – the stage has started to fill with smoke/fog. Smoke also pours from vents in the stage floor itself and continues to do so for the rest of the play’s two hour duration. The lights at this point are a bright grey, like cold morning sunshine in winter. Ivanov is suddenly standing alone in a fog.

From hereon in, virtually all entrances and exists are made through the fog. Characters become looming shapes gradually resolving into solidity as they emerge from the swirling smoke.

It’s impressively gorgeous, and often I caught myself just watching the smoke swirling in the lights, but it also serves a cleverer purpose. When I reviewed the Branagh/Grandage production I hit on the phrase “wrapped up in a fog of self-pity”. This is precisely that fog. It is as if we are seeing the text staged in Ivanov’s mind. A relentless fog of depression from which ludicrous characters appear to torment him. The supporting cast’s performances echo this. While Finzi’s Ivanov is still, quiet, bemused and cruel, the other characters almost dance a colourful burlesque around him – as near-grotesques.

It’s worth noting that there isn’t a lot of psychological realism on show here. It’s interesting to note how much this still wrong-foots me. I mean, I’m as big into post- stuff as anyone, but it’s remarkable how difficult I still find it not to think of that approach as “properly”. So, no, they’re not doing it “properly”.

It’s also interesting watching a production which isn’t aiming to really wrench at the heartstrings. It’s emphatically aiming in precisely the opposite direction, in fact. Obviously by watching it in German I’m bringing a pretty significant V-effekt all of my very own to the production, but, even without this minor consideration, it’s pretty clear that Gotscheff isn’t really interested in making us weep.

As Ivanov walks downstage in the first minute he is accompanied by the sound of My Heart Will Go On and Time To Say Goodbye played concurrently, jarringly, almost sarcastically on a tinny synthesiser. Thereafter, little phrases from either song play out at random, like irritating ringtones in/of this troubled mind.

This is a production which isn’t overmuch concerned with love...

[and there it stops. I think there was a “but” coming next, telling us what it *was* concerned with, but somehow I never quite got round to it. Anyway...]

Here's a video of it:

And some more photos 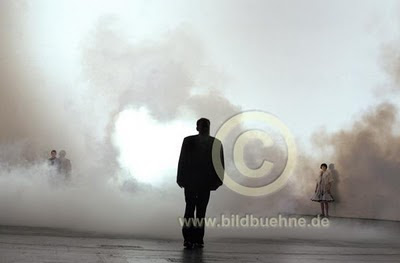 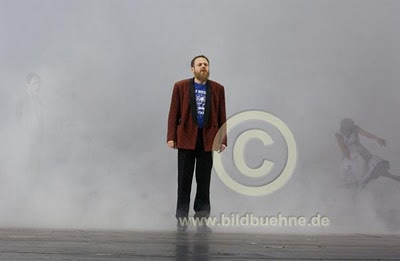 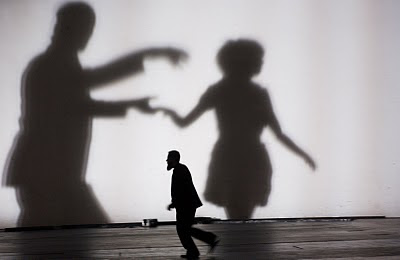 Posted by Andrew Haydon at 22:11 No comments: