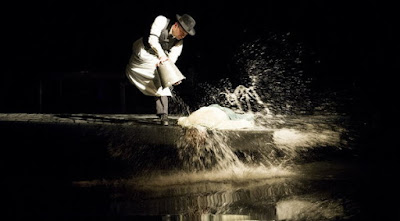 There are *at least* two reviews to be written here. I’ll do my best.

Ok, so, the story of Nevesta hôľ is, I think, something like this: boy (Libor) and girl (Zuna) meet in childhood. Boy moves away(?), grows up, and is appointed game warden of some Slovakian forest back where Girl lives. Girl is all betrothed to some guy. Oh, wait, to several guys? She’s already married? Oh, her betrothed is already married? I. Just. Don’t. Know. Anyway, in spite of all these confusing odds, boy and girl seem to get together. They share conversations about their confusing pasts, in even more confusing flashback. But her wild nature is all troubling to him. Then she throws him over for some masculine essentialist. He’s sad, of course, but imagine his surprise WHEN SHE TURNS OUT TO ALSO BE A WEREWOLF!!! AND THIS IS BEFORE THE INTERVAL!!!!!

František Švantner’s 1946 novel, The Bride of the Ridge, lovingly, painstakingly adapted and directed by SND (Slovenské Národné Divadlo/National Theatre of Slovakia) artistic director Roman Polák, seems to be a bewildering beast of of a thing. The adaptation runs at 3hrs30 and, I’m guessing (no, I haven’t read the book. It isn’t even translated into English as far as I can see) it runs pretty closely to the original. Apparently Švantner (b. 1912, d. – a year younger than me – 1950) was the Slovakian García Márquez; a magical-realist, whose prose was inextricably tied up in the soil and landscape of his homeland.

A WEREWOLF, THOUGH!!! SHE TURNS OUT TO BE AN HONEST TO GOODNESS WEREWOLF!!! Actually, though, I completely bought into that. No problem. If you can’t discern a metaphor on stage when you see one, you might as well go home now.

Now, English-me did start off with some reservations about the implied gender-politics of the thing. There’s only one named female character in the play. Every other woman on stage is defined as “Miller’s Wife” or “Libor’s Mother”, or, in an instance which jumps the equality shark “Sister of Shepherd’s Wife”. Know your place, ladies! In strict fairness, though, the naming of the blokes is pretty scattergun, some having names, and some having jobs. Four war-happy Russian rapist soldiers all get their own names and titles (“Earl Boris” and so on...).

But, in the scheme of the play, is Zuna not far and away the most realised, powerful character on the stage? And, more than this, beyond the descriptions of her “wide hips” and “full breasts”, isn’t she really just a big old stand-in for Slovakia herself? Zuna’s so tied to the nature, the forest... What’s that thing she says about ugly badgers?

“Even an ugly badger will awaken joy in you if you understand its anxiety and help it.”

Exactly. Isn’t it borderline madness to try to object to the reactionary characterisation of a woman who says things like that and wrestles naked in the forest with the boy-werewolves?

No. Silly. Don’t be. Yes, ok, in strictly modern terms, maybe it’s not unproblematic, and if you were so-minded, you could find the gender essentialism and the female bits of the stage nudity (if anyone’s actually naked, I thought I spotted some flesh-coloured underwear) tricky. But on the other hand, isn’t it all pretty equal, gung-ho wrestling madness fun, while still set in something recognisably truthful about mid-C20th Slovakia’s (obviously) patriarchal society?

What about the anti-Semitism?

You know what, I think that reveals more about you than the play.

That’s a serious charge. There’s only one character with a Jewish-sounding surname, he’s the one who’s depicted as caring only about money – pathologically so...

And you associate that with Judaism?

No. I associate it with anti-Semitic tropes, and note that Slovakia has a long and troubling history with anti-semitism (this news report from the year the novel was published). It’s not impossible that they’re staging a piece of national art that has an anti-Semitic stereotype in it...

Well, thank God we British would never do anything like that.

It’s true, you do see things in starker relief when you’re not at home. Perhaps we’re all too used to the domestic racism of our own countries to question it strongly enough.

Ok, so, yes, it *might* have a minor character who conforms to anti-Semitic stereotypes, *if the character is even meant to be Jewish*. He might be an Austrian stereotype for all you know. Or wherever Slovakia’s equivalent of Scotland is. Also, what about that bit where the hero, Libor, refuses to go along with the villagers’ plan to kill him? Can we maybe stop worrying about a national culture you don’t really understand, but seem a bit willing to point fingers at, and talk about the thing *as theatre*.

Alright. It’s too long. And the staging is pretty old-fashioned.

Oh, fuck off. You *liked* it. And the staging reminded you of virtually everything you’ve seen at the NT in GB.

Ok, yes I did. It’s definitely maybe half an hour too long, and there are a few bits – particularly the ending, which felt more like a shrug, in terms of delivery – that could have been tweaked, but yes, in spite of myself, I did rather like it.

Why even have it be “in spite of yourself”? It’s a fine, fine staging. The main stage of the Slovakian National Theatre looks like the Olivier, (but bigger?) and Pavel Borák’s minimalist set – a raked square sloping down toward a kind of onstage lake or river, all in black – looks like, well, like an opera of King Lear on the heath, or something. Indeed, there was something about the whole that made it feel almost like it might have been a prequel to King Lear (it would certainly explain his children, although not how he comes to be king).

Can I just mention the recorded howling?

I LOVED the recorded howling. When Zuna goes off into the forest, and we discover she’s a werewolf, or some sort of elemental spirit of the forest, the nation, or something, there are actual, full-on, amplified recorded wolf howls! It’s properly great. If you’ve got your disbelief suspended, honestly it’s terrific fun.

But what about the story. Surely it meanders a bit *too* much? I mean, given a decent dramaturg or script editor, surely the whole thing could have been trimmed by about an hour without losing anything invaluable. Various minor, illustrative scenes could have been cut or condensed, it wasn’t even always clear where the story was going.

But didn’t you love that? I know it’s not the trendy thing to talk about “story” any more, but given that we’re both English, and therefore addicted to narrative, didn’t you find it geniunely exciting that from some point in the second hour onwards, you no longer had any idea where this story was going. What it was even a story *about*. You didn’t recognise the shape of the story any more. When was the last time you can honestly say that happened? You thought it was going to be this boy-gets-girl thing, then you think it’s maybe a boy-loses-girl-to-rival thing, and then, once she’s a werewolf, all bets are off.

But all those flashbacks! I mean, it didn’t help that often you didn’t even know who was in what time-stream. It’s not like they were properly flagged up or anything...

Pfft. You recognised them well enough to call them flashbacks. And didn’t the way that a flashback could walk on in the same way that a bloke in the next room might excite you? And anyway, what flashbacks they were! There’s a scene where we see, what? Zuma’s conception? Her mother is raped by four Russian soldiers all of whose throats she then rips out...

Do we trust stories men write where women are forever getting raped?

No. I’ve read that article and worried over it considerably. On the other hand, do we trust stories that somehow gloss over this horrific reality? It doesn’t take much historical knowledge to realise that Slovakia has been invaded repeatedly. It’s so central in Europe, that it feels as if the armies of much larger nations (Russia, Germany, Austro-Hungary, the list goes on and on...) have been tramping back and forth through here from time immemorial. And armies rape. It’s just a hideous fact. It seems slightly futile to object to this fact being written into a novel that is essentially dealing with a national identity. The way that this fact of life is woven into the fabric of a society is all the more fascinating and chilling for its being a commonplace. Yes, it’s written by a man, but it’s hardly invented by the author. I would argue that it’s most definitely *not* included to be “entertaining”, and it doesn’t happen on stage.

You’re going to claim this as a triumph of feminism soon...

Well, ok, granted it’s written, adapted, and directed by men. I’d argue that even if it appears to be Libor’s story – and the title in English problematically puts Zuma in the title, but calls her the Bride of the Ridge (the ridge being a geographical feature). I’d argue that its primary sense – that this is about a woman whom people want to marry – gets subverted into a literal sense that she is married already to the ridge itself. Which seems much more like equal marriage than the hereosexual religious version...

Is this still a useful discussion of the piece?

I have no idea. It’s very long now, though.

Epic. Inconclusive, a lot of fun in places, but maybe too much effort?

The play or the review?