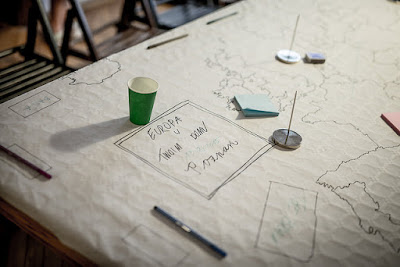 Rimini Protokoll! It’s been a while. Rimini Protokoll are a fascinating beyond-verbatim theatre/live-art/whatever Swiss-German company headquartered in Berlin. I first came across them at the SpielArt Festival in Munich, in 2007, and what they were up to, even back then, kind of blew my tiny mind. It might seem, given the gulf between the work described in my first encounter with the group (‘07) and my last, in 2011, that RP have been moving further and further away from shows that involve them employing actual “performers” (or the members of the public whom they term “experts” – experts on their own lives – that perform in their pieces). Actually, the second to last RP show I saw – at HAU2 – was rather more like the first, so as far as I know, that’s not particularly true. Rather, their work has two almost distinct strands to it – with pieces that are mostly participatory seeming to take the main stage at international festivals now.

Home Visit Europe *sort of* does exactly what its title suggests. Here at the Malta Festival, myself and eleven other guests made our way out to a house right on the edge of the city’s suburbs – I’m not kidding, they had a full-on MittelEuropa pine forest at the end of their back garden. The set up of the show is as follows: the guests all sit round a table on which is drawn a paper map of Europe. We plot various places in our lives into the map and later join the dots.

This done, a mad little device is place on the table. You press the green button and a till receipt comes out with a question printed on it. This is passed round, everyone taking a turn to press the button and ask the question. The piece is essentially about the answering of these questions, which have a very definite inbuilt dramaturgy to them.

It would be entirely wrong of me to really reveal what the questions are, or even what happens next (if this piece doesn’t tour widely and for ages, I’ll eat my hat), but in order to give any sense about the thing at all, I think it’s probably ok to suggest that it feels *a bit like* a more dramaturged/abstract version of World Factory. (I say *sounds like* since I didn’t see the latter.) Here, rather than *directly* *playing* the European Parliament, or anything similar, by answering questions, first as twelve individuals, then as smaller and smaller groupings, you definitely get a sense – especially given the little information sections that also happen – that what we’re thinking about here is how Europe has been constructed, first as a concept, then as an actual political entity. And how power operates within that. And whether that power is even remotely equally distributed.

I’m not sure if the piece is *finished*, or if there’s a certain amount of “road-testing” that’s still going on here. It’s sharp, definitely, but I get the impression that it could be sharper, or more pointed, still. But perhaps, again, this is down to German opposition to too much directed thinking (as I see/understand it), coming up against my Anglo- trained mind wanting to be given some much more definite parameters. Either way, it still puts you very firmly in a pretty specific ball park. And the way *the game* unfolds definitely makes you think again about how much actual good the European project is doing.

It’s worth qualifying this last point about “how much actual good the European project is doing” for a British audience. This isn’t the same pantomime of xenophobia and sovereignty-related pram/toy-outchucking that passes for “questioning the European project” in the UK, one of Europe’s largest economies and home of the popular-to-the-tune-of-4-million-idiots UKIP. Instead it is informed by a rational and concerned stance on, for example, what the German economy is doing to the Greek economy. And, perhaps much more importantly, the extent to which the entire enterprise might be firstly a massive exercise in expropriation by the capitalist West of the assets of former-Warsaw Pact nations, with a side order of massive cultural imperialism, and secondly, a largely American-sponsored ideological pact with an endgame of US airbases on the soil of the former-Soviet Union.

All this is carried off in the guise of an innocent, well-meaning party game where all we’re doing is competing for the biggest slice of cake. Which, thinking about it, is pretty much how Europe probably feels. Bravo, then, to Rimini Protokoll, for creating a show which, when described in its barest form, exactly describes precisely what it’s seeking to excavate. 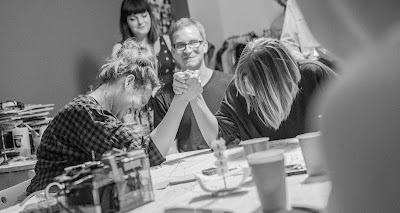