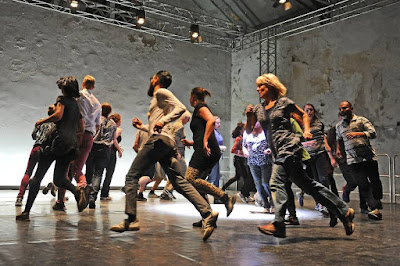 Fascinatingly, Schwalbe is looking for crowds is listed as “Theatre” in the Malta Festival programme. I have no problem with this, but, blimey, I can imagine some people who would. More than this though, it’s interesting because you could equally categorise the work as contemporary dance or Live Art and I don’t think forward-looking types in those disciplines would object. Still, you didn’t come here to read about taxomony.

What happens in Schwalbe is looking for crowds is this: approximately twenty? thirty? people – the company might have been founded by young graduates, but they work with non-trained members of the public of all ages, up to 94-years-old (!!!) apparently – walk round a central point. They keep walking. After a while one of them breaks into a jog, and then a run. Others begin to jog and then run. Various numbers of them speed up and slow down, all the while going round and round. The few older performers limit themselves to the centre, and move at paces with which they are comfortable.

The outside of the rough circular mass moves faster than its core. At the beginning, the space is lit from the floor up the walls. As the piece move forward through time, a light on the rough centre of the mass grows brighter. At some point, lights across the whole performance space spark on and the white stage is bathed in light. The performers run faster.

This is, more or less, the whole piece. EXCEPT [spoiler alerts!] at one point they change direction. And at another point, probably 40 minutes in when the original group seem to be flagging, they are joined by another group of maybe 20 more members of the public (these ones, I happen to know, are local to Poznań). It is probably incidental, and more to do with who volunteered, but these are mostly young women.

The group, the mass, continues to revolve.

The piece is about an hour long, apparently, but I’d be happy to swear it was half that if I hadn’t seen a clock at either end. It’s ridiculous just how absorbing watching a group of people you don’t know run round in circles on a smallish stage for an hour is.

What work like this does is create a huge space for you to reflect. It’s like a shadowy two-way mirror; you do see what’s being done on the other side of the mirror, but at the same time you also, unavoidably, see a lot of yourself. As such, writing about what the piece is *about* feels even more exposing than a regular theatre review, in which at least there are things that other people have said to discuss. Here it’s just this kind of large human nucleus pulsing away.

I probably ended up reflecting most on how we watch things: what grabs the attention. About our in-built(?) or learned tendency to narrativise things. It was interesting that the tallest, the shortest, and the oldest members of the company stood out. That the most colourfully dressed attracted more (of my, slightly sleep-deprived) attention. And of course you wonder what is deliberate and what incidental. How much of what I reflected on was something that one of the makers had been thinking about when they came up with their concept. Apparently the piece is interested in the movement of crowds. Or how large numbers of people move together (apparently there’s an enormo- version of the show with over a hundred participants...). I don’t want to sound anxious. The piece itself wasn’t one of those things where you worry if you’re “getting it”. In a good way, there wasn’t especially anything to “get”. (I mean, maybe there was, but in the absence of any signposting, I was very happy to just watch and engage pretty much on my own terms.)

There is something beautiful about the simplicity here. The piece really did seem very content not to be pushing any directed agenda or debate. And, from this position of apparent calm, seemed to manage to say an awful lot about people, society, how we think, etc.

I am very glad this exists and that I saw it. Hope it transfers, but if not, maybe we can find fifty odd people and make them run round and round the middle of the Lyttleton or something one lunchtime and charge people £2.50 to watch. I think after the hour the audience would feel quite pleased they’d seen it too.
Posted by Andrew Haydon at 15:55