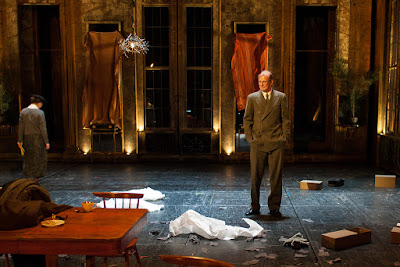 Now here’s an interesting and exciting thing. Kameň is Národné Divadlo, Praha (National Theatre, Prague)’s production of Marius von Mayenburg’s Der Stein (The Stone), which I first saw in Ramin Gray’s superb production for the Royal Court, back in 2009 (interesting to re-read that review by six-years-ago me, too. Blimey, I used to elide text and production *a lot*).

Did you see it? Or the original at the Schaubühne? Very briefly: the plot concerns a house in the former East Germany. We see scenes from 1934, 1953, 1993 (and other intermediate years in this production?), as the house is acquired from its Jewish owners by a non-Jewish German family, escaped from to the West, and then returned to post-Mauerfall. Gradually it emerges that the story that Witha has been telling her daughter, Heidrun, and that Heidrun has in turn been telling her own daughter Hannah – that they bought the house to help out their Jewish friends escaping the Nazis, that they weren’t party members, that Witha’s husband Wolfgang *definitely didn’t shoot himself when the Russians entered the town, beating back the Nazis*. That *The Stone* had been thrown through the window of the house by Nazis, not by mistake by Germans thinking that Jewish people still lived there.

Again, the title of this festival – Eurokontext – couldn’t be more apt. It’s properly fascinating to sit in Slovakia, watching Czechs, perform a German play, wrestling with the communist and Nazi past. There are already so many layers right there. Czechoslovakia’s shared history, Slovakia’s horrifying deal with Germany to *pay the Nazis* for every Jew they deported from Slovakia to the death camps, their time all together behind the Iron Curtain. The cognitive dissonance of watching a foreign play in *the wrong* foreign language.

And, fascinating again, how the changed context – from a habitual stamping ground and my native language at the Royal Court to an entirely unfamiliar language of which I know about five words (two of which are National and Theatre) – but maybe also the intervening six years, made such a massive impact on what I thought the play was about. Six years ago the thing that really made an impact on me was a story about the Germans lying to themselves about their Nazi past. (Exactly a month after I posted that review I went to Berlin for the first time.) Now, while *obviously* that is something that happens in the play – and is the Big Reveal (but not big surprise) of the play – on second viewing, in 2015, it feels secondary to a lot of the other levels happening here... Michal Dočekal’s production is about as different from Gray’s as it’s possible for two productions of the same play to be. Here’s the UK one. Just look: 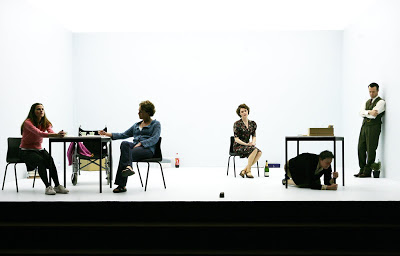 The genius of Ramin’s concept was that (as far as I remember) no one could enter or leave that white box stage(?) once the play had started. Moreover, there were no costume changes. Period was evoked (as far as I remember) by *context* and maybe a bit of age-acting. But each character was dressed as if frozen in time, but doomed to play out whole different scenes from that one vantage point. Dočekal’s version irons all this out, having entrances, exits, different costumes for different time periods, etc. Similarly, the set for this Czech version is the exact opposite of a plain white box, it is ornate, dark, shimmering in places with burnished gold. It’s like a mansion designed by Klimt. In concessions to non-naturalism, the back wall of this echoey hall moves backwards at one point, and then forwards – past its original position – later, pushing the performers almost to the edge of this notional room. In my review of Ramin’s production...

[and, yes, I hate it when other critics compare one production through the lens of another, but, here, I’m afraid it’s also exactly how I watched the play. And at least I have the space to unpack the impulse, right? So it doesn’t turn into one line saying: “Ramin Gray’s production was better/worse/too-different-to-compare...”]

Anyway, in my review of Ramin’s prodution I suggested that it’d have been nice to have a bit more of an accretion of stage mess. At the time I was still very much in love with Felicitas Brucker’s staging of Hamlet is Dead... and immoderately wanted to see that aesthetic applied *everywhere* (as it happens, Gray, with Ravenhill, did exactly that a month later with Over There – what a great month or so, incidentally, that was at the Royal Court...). Anyway, Dočekal’s version does indeed have mess, although, in keeping with the aesthetic, it’s dry mess: masonry, cardboard boxes, and a steady fall of papers, or leaves, or ashes from the flies, and it works well enough – the papers/leaves/ashes especially, for all that they might represent – but I feel six years on I should at least tell Ramin he was right all along.

What Dočekal’s production (or watching it in Slovakia, or watching it performed by Czechs, or watching it for a second time, or watching it six years older, or watching it with a terrible Tory government in Britain) made much more vivid to me, is how this is not just a play about the Nazis and Germany and denial, but also how much it is about class. I think the most chilling thing anyone’s said to me all year was during my interview with Shermin Langhoff and Jens Hillje at the Gorki when one of them matter-of-factly explained, “well, of course, *here* we gassed our whole bourgeoisie”. They weren’t making light of the Holocaust *at all*. But they were presenting it in stark class terms. Of course Berlin had “Aryan” bourgeoisie and a Jewish proletariat too, but in Hitler’s the rhetoric was very much about “Rich Jews”: *They* have more than *you*. Why should *they* get all the good stuff? *They are crippling *our* country... Further examples can be found in today’s Daily Mail relating to asylum seekers, those on benefits, etc. but the very fundamental difference between Hitler and the Daily Mail was that he was fostering upwardly-directed class resentment. Rather than getting the lower middle classes to turn on the very poor, he directed their anger, and the anger of the workers, upwards against a “Jewish banking conspiracy”. His rhetoric probably a lot closer to Plan B’s Ill Manors than either would be happy about, I suspect (substitute “Jew-” for “rich-” and you’ve got half the ethos right there...). They were the National *Socialists*, after all.

So what you get from the interplay of characters The Stone is a much more complicated analysis than I first gave it credit for. Wolfgang acquires his Jewish superior’s house, and probably also betrays his plans to leave to his local SA or SS group. While doing so, Mieze, the wife of the (unseen) Jewish boss – in this production – is older than Witha, knowing and even slightly superior in attitude. Dignified, but still arch. Not just sympathetic, but also slightly snobby. It’s quite a brilliant way to play those scenes. It is then Heidrun’s sharp-elbowed middle-class determination to hang on to property that also resonates. And the legal backing by which this can be achieved – turfing the East German Stephanie and her grandfather out of their house because in reunified Germany she has all the correct paperwork.

If anything, watching here in ex-Czechoslovakia, what you really feel most – even after two dictatorships – is the extent to which the failure of communism is a catastrophe. (Don’t worry, I’m not all misty-eyed for secret police and no elections, although, Christ, given Britain’s electorate, it isn’t half tempting...) But, yes, if anything this version of the play shows history, not as extraordinary events, but a series of small but relentless instances of families just looking out for their own, whatever the cost.
Posted by Andrew Haydon at 09:20