A Doll’s House – The Space, Isle of Dogs 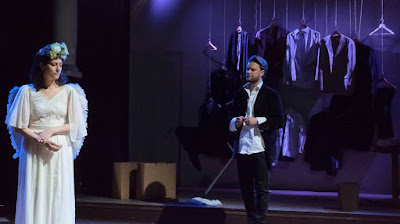 In a lot of ways, it feels like the most exactly opposite version imaginable while both things are still Very Good. Where the Young Vic’s ADH had a superbly detailed naturalistic set on a revolve, here we have the bare wooden boards of the docklands’ Space venue – a lovely small, deconsecrated church in some street, in the middle of nowhere – playing essentially in traverse. Where Cracknell had a full compliment of maids and tiny children and as much diversity as, well, as the middle class of C19th Sweden, here we have just five actors of various ethnic backgrounds and nationalities.

If I’m completely honest, it took me five, maybe ten minutes to completely tune in to this production’s rhythms and style. I *wanted* to completely trust the actors, and after about five minutes I totally did. I was, for example, briefly wrong-footed by Torvald (played by Swedish actor Johan Hallstrom) holding a copy of the script. I knew it was the first night of this short run, and that it had effectively been rehearsed in about a week and a half. And, hell, the guy’s Swedish. But, NO. FEAR NOT. He’s holding the script because Clever Directorial Decision (essentially serving as a set-up to a call-back in the very final minutes. Hint: this production uses Ibsen’s rarely staged “alternate ending”). But, yes, after a little period-of-adjustment to the night’s chosen theatrical style [does anyone else get this sort of genre-reacclimatisation issue, btw?] I was, to dip into the cliché barrel, gripped.

There really is so much to like about this production. The bare stage is just the start of the unfussy, clear story-telling going on here. The whole thing runs at just 1hr45 (without interval), in a new version/adaptation cannibalised by the director from an out-of-copyright translation. It really is a brilliant edit. It doesn’t feel like anything’s been missed out, but the whole is pacey as anything and folds 1hr45 into something that feels little over an hour. Any servants in the original have been dismissed, and letters/messages that arrive are delivered straight into the hand of the recipient at the relevant moment probably curtailing a lot of faffing about, and, like the doorbell, their arrival is indicated with a little electronic boing noise – there’s even an illuminated letter “icon” projected onto the upstage back wall (whatever that is in traverse), that folds this timeless production neatly onto our own era of mobile messages and phones receiving emails. As such, it constantly feels smartly contemporary, without our having to worry about either *actual* location or time-period.

[The one exception to this is the naming of the amount lent by Krogstat to Nora as £250, which is obviously, a) English money, and b) an amount wouldn’t get anyone to the seaside, let alone save their life, *now*.]

It’s also brilliant to see *another* reasonably diverse cast being so seamlessly deployed. (It really is a genuine mystery to me why this approach isn’t applied to everything as a matter of course.) I would have said “colour-blind”, but I did wonder whether it was entirely coincidence that it was the two female characters who were mixed-race, and that all the male characters were played by white men – all from different countries (UK, Sweden and Australia). It perhaps worked best because even though it was a possible extra dimension through which to read this play about societal expectations, it was equally just a useful political statement of intent (the production’s casting call was completely open to actors irrespective of race, age, or disability and Mashiter has elsewhere written a storming piece on the necessity of relaxed performances). Interestingly, in one way, it felt like it was the cross-continental distances (Rachel Handshaw playing Christine is also American) that spoke most clearly to the gulfs in comprehension between the characters.

However, for all that the above musing is/was possible during the show, and as admirable as the small staging touches were, what probably made the 1hr45 pass so fast was the sheer fact of a still-excellent rattling good story, acted with real precision and drive.

[I think those (precision and drive) are just the things I like best in performance. *Of course* they were *emotionally truthful* and *believable*, but I think other things are more interesting and important in acting like that. Pace, for example (which, incidentally, they nailed the crap out of). I think I believe *emotion* is probably something we tend to fill in for ourselves from context. Although I guess I’d find it weird if actors in Britain didn’t do *emotional truthfulness* as a matter of course – just as I’d find it weird if they *did* do them in Germany.]

So, yes. Basically, if you haven’t seen something properly off-the-beaten track in a while – and, no, Oval House, CPT, The Yard, New Diorama and BAC aren’t even remotely off that track now – get along to this. Or if you haven’t seen any “Fringe Theatre” in a while that was actually both gripping and (probably, virtually) penniless, again, this. It’s a timely reminder that big budgets can only ever do so much for a piece of work if the intellectual leg-work’s missing.