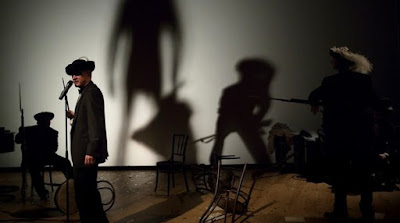 Before Young Stalin, there was another historical drama to watch, Prorok Štúr a jeho tiene alebo Zjavenie, obetovanie a nanebovstúpenie proroka Ľudovíta a jeho učeníkov (The Prophet Štúr and His Shadow, or: The Apparition, Sacrifice and Ascension of The Prophet Ľudovíta and His Disciples). This is (as far as I can make out) a new piece of contemporary Slovakian drama. It is about the revolutionary years 1848 and 1849 in Slovakia. And, Very Annoyingly, it is almost entirely dramatically inert.

I’ve been thinking about this, and about my response to the other three Slovakian plays I’ve seen so far this week, and I am feeling fairly wretched for not having been able to praise a single one. It is absolutely crucial – especially at a festival called EuroKontext – to foreground my subjectivity here. And to report also that the (almost entirely) Slovak audiences I’ve been seeing the shows with have liked the work, responded to it, been moved by it, and often given it standing ovations (although that does seem more like a national tradition than a spontaneous impulse). All that is *very important*. Any criticisms I might have/criticism I write comes from what is a place of *fully acknowledged* *complete ignorance*, or at least from a mind so soaked in Anglo- and German traditions that I can’t quite get my head around this would-be “ideologically free” “realist” Slovakian tradition. (Not least because I cannot believe that there is a way for something not to be ideological, which, *obviously* I have to see as ideological too – I can’t have it both ways). The Anglo-German thing is interesting to me, though. Because I do feel at least slightly theatrically bi-lingual (although In No Way *actually* bi-lingual). I now feel both the German theatre response *and* the (traditional, old-fashioned, naturalistic) Anglo- one in my blood while I’m watching (as well as the possibly stronger, deeper Anglo- impulse to like *anything funny*). And I like to *hope*, having been watching theatre a fair old while, that this means I have twice the number of ways to approach a work of theatre. If “watch on its own terms” is meant to be our (flawed) dictum as critics, then the more terms with which we’re familiar, the better chance we have of understanding a piece of work, right? Of course, watching art is political and we might *choose* to wilfully appropriate a piece of work, and maybe even deliberately watch it in a way a piece was not intended to be watched in order to further our own political arguments. But, equally, we may just approach a piece of work *wrong*. And say it’s a bad attempt at (a), when in fact it’s a dazzling version of (b). But if we don’t know that (b) exists, it’s a rubbish (a), until we’ve collected further data.

All of which is a preamble to saying, Prorok Štúr a jeho tiene alebo Zjavenie, obetovanie a nanebovstúpenie proroka Ľudovíta a jeho učeníkov *seems* to be quite a bad (a). In this case, (a) is a historical drama, a history play: history dramatised. It is not a good (a) because it dramatises the history rather badly. It takes the sweep of the events of 1848 (and ‘49), and places blow-by-blow accounts of them into the mouths of ciphers with the names of principle players in the Slovakian freedom movement. Watching, I did wonder if my lack of any sense of connection to this history might be partly the problem here, but I have watched a lot of other history plays about other histories to which I also have no connection, and have been engrossed by them. So I do think it’s the dramatisation itself that’s the problem here.

It’s funny. The text itself is so fact-based, that I think if it was performed *de-costumed*, and on desks with mics and big tellies and etc. – deconstructed any way at all, in fact – it might work rather well. Sadly, this production opts for “a-historical” (which looks a bit like it might mean “let’s hope no one notices it’s contemporary”) evening dress (a staple costume for UK student drama set in the 1920s, for example) costume drama.

I promise this isn’t me just wanting everything to have mics and big tellies. It’s just that the costumes – for me – set up an expectation of character and drama, which then (for me) failed to materialise, but, meanwhile, the production shows every sign of believing either that they already have, or that they will soon, as soon as the fact have been delivered.

There is a bit of (admittedly hugely schematic) personal interest too. But this runs into what seems to be my other perennial issue with the Slovakian theatre this week – its unabashed, rampant sexism. There is a beautiful illustration of that here: the first woman to walk on stage – she’s playing a liberated, free-thinking, modern, progressive Hungarian intellectual (although her only role in this piece is as a love interest whose interior life is only noted because it irritates Him) – she walks on and throws a handful of glittering confetti into the air above her and it sparkles down around her. It’s actually quite a nice effect, objectively (if “nice” can be “objective”). But MY GOD! It’s like calling bullshit on Manic Pixie Dream Girls never happened. (And, let’s be scrupulous: it’s not like it has stopped it happening Anglo- theatre either.) But I don’t think I’ve ever seen it made quite so flagrant. Later on, there’s a bit where Slavic Intellectual Dream Girl is disappointed. She leaves the stage with: actually a forlorn little glitter-trail wafting in her wake. This is also intentional. It’s like she’s literally Tinkerbell. (Who, of course, being an actual pixie is presumably beyond reproach? I dunno.) I should say, in the defence of the production, that the whole is actually rather stylish. It doesn’t really work, and the actual acting feels somehow hamstrung (at least when played through surtitles) by the expositionary nature of the script. But there are definitely some nice flourishes, as we see in the press photos.

But still – yes – problematic. And, once more, I should foreground my belief that all criticism is necessarily subjective, and this, therefore, is deliberately so. (Does anyone else get the feeling I’m trying to avoid having to have an actual argument about this reivew? I do).

Then, dear reader, 1hr30 in, there was the interval, and, having *a lot* of work to do I opted not to see the second half. Which, I am assured by my colleagues, was absolutely no better. But I realise it does stop me actually being able to comment on the success or failure of the piece as a whole.

If you’re interested in the plot, it can all be found here, though: