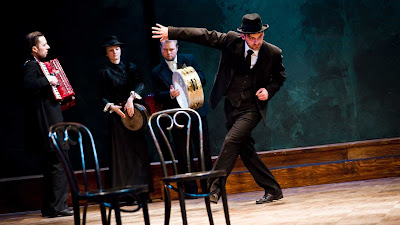 Here’s an unwise bet: I reckon Tadeusz Słobodzianek’s Młody Stalin (Young Stalin) would do really well at the National Theatre (the British one). If we reproduced exactly what I saw last night, I think mainstream British audiences would absolutely lap it up. And I’m not talking with my rather far-fetched *everybody-will-love-postdramatic-theatre-just-you-wait-and-see* hat on, here either. I reckon people would love it in the same way they love Rosencrantz and Guildernstern are Dead or The History Boys.

Young Stalin is a big, broad, often very funny narrative drama offering a fast paced bio-play of Stalin’s life from his first marriage in 1904 to a point sometime after the 5th Congress of the Russian Social Democratic Labour Party in London, 1907 (yes, in the church that once stood where that Tesco Metro is now). Like a Shakespeare history the play compresses the action so tightly that you imagine all the episodes it depicts must have somehow fitted into a very busy week.

The stroke of brilliance here is the humour. The piece begins with young Ioseb Besarionis dze Jughashvili (Stalin’s Georgian birth-name, innit) giving a speech at his wedding in which he accuses his violent, abusive mother of having slept with every man in the room except his (absent) father. It’s at once cruel, probably based on some sort of painstaking research, and, crucially, very very funny. It’s the sort of bloody-minded sardonic humour and swagger that makes you love a character. Guilty pleasure, sure, but I guess we’re ok because he’s not actually Stalin yet.

Słobodzianek plays an amusing balancing game around the various pitfalls of writing historical plays. The first scene of the second half finds young Stalin in Vienna – he’s chasing across Europe trying to meet up with Lenin. The scene opens in a café with a young artist about to do his exams chatting away to Wittgenstein. Then it dawns on you who the artist is... *Then*, Freud and Jung walk in having a (surprisingly pertinent, ta dah!) conversation about the Oedipus and Electra complexes – which, when you consider Stalin’s wedding speech, is particularly amusing. *THEN!* Karl Krauss, Arthur Schnitzler, and some other guy turn up too... It goes from being maybe an amusing pastiche of Stoppard’s Travesties or a Terry Johnson play to an all out absurdist send up of even embarking on such an enterprise. There’s a tension too between the knowing humour and what we also know about the way the rest of the 20th Century will unfold. All the laughter here, even at pure silliness, is pitch black.

The play also does a good job of sketching the internal struggles between the Bolshevik and Menshevik factions in Russian Communism. And, what is striking – particularly in the light of seeing The Stone again so recently – is the absolute centrality of class. It is striking that when the Russian communists all sign a loan agreement with a useful idiot American, the majority of their professions is “journalist”. Only Stalin signs himself “robotnik” (worker). Between this and The Stone – and I really can’t praise the dramaturgy of this festival highly enough for putting together so many pieces in dialogue with each other, which are, en mass, really building a sense of Europe, its drama, and its history – one really does get a chilling sense of the sheer horror that can be unleashed when one bloke with a chip on his shoulder somehow manages to claw their way to power. The play also notes briefly Stalin’s concern at the high proportion of Jewish revolutionaries. And again, we hear just that faintest of whispers from history of what was coming, and, worse, the sense of just how powerful that feeling of continent-wide anti-Semitism must have been.

As productions go, Ondrej Spišák’s is remarkably straight. František Lipták’s set is just a roughly painted, three-sided room with the same tables and chairs strewn around for various cafés and meeting rooms across Europe. The performances are wonderful. I have a real soft spot for the intensity with which the Poles apply themselves to naturalism (hell, I’m English, I grew up on intensely applied naturalism, right?), but there are also sly winks to comedy and a knowingness about some of the scenes that impart their stories through jokes about how they’re presenting the history. It’s a really nicely handled, appealling mix. There’s also a fine amount of Georgian-sounding songs and dancing, along with Russian songs, Polish songs, and even an American burlesque of the Internationale.

Indeed, the production is *so* straight that I suspect my smart Polish friends will have their heads in their hands that I liked this so much. I’m sure in the Polish theatre scene this sort of work is seen as entirely reactionary. But, Euro-Kontext again: I’m British, and as such you can get a lot by me as long as it’s got some good jokes in it. And, y’know, for me; rather than coming at the piece from a position of eye-rolling wearniness, it’s all a fresh perspective for me.

What, contextually, we don’t get here in Slovakia, however, and what we wouldn’t get in London, is the building where this originally played in Poland. The Warsaw Drama Theatre is slap bang in the centre o Warsaw, in one of the arms of the “Stalin Wedding Cake”. A vast, monstrous skyscraper essentially built by Poland’s Soviet occupiers as “a present”. And, you maybe don’t get quite so fully that bitterness that the Poles feel against the Russians, who promised that Warsaw Uprising support, and then sat, cynically, on the other side of the Wisła and allowed the Nazis to annihilate them and destroy the city, before sweeping in themselves.

That said, for all that lack of immediate context the final moments of the play are superbly chilling. Stalin has returned to Georgia and is alone in a café apart from three musicians. He is already top dog in his town, people are clearly frightened of him already. And he instructs the band to play. They do, and he just dances. A strange, sad, intense, expressive native dance. Without knowing it’s Stalin it might almost be nothing. And it could be anyone dancing. And in that blurring of possibilities, that’s where the genius is. Maybe it could be anyone.
Posted by Andrew Haydon at 12:13