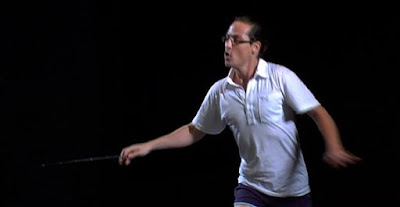 One of the many strands at this year’s Malta Festival is one of Israeli-Polish choreography exchange. Yes, I am aware there is a debate in the UK about boycotting the work of Israeli artists, especially when their work is state-subsidised, as this programme is. And I am fully aware of precisely why that debate exists. Similarly, I am aware of the events, particularly in Poland, that directly preceded the foundation of the State of Israel.

Had I not watched these two pieces, I would not have known – or at least, not experienced first hand – that both are searing critiques of the present state of the State of Israel, both made by Jewish Israelis. Yes, there is also an interesting debate to be had about what the state-funding of work that is directed against the present administration of that State means.

Rotem Tashach’s Israelica is a kind of stand-up performance lecture on dance. It is warm, beguiling; he’s like this Jewish version of a younger Kevin Spacey, but *actually* charming. He talks about the division of the space we’re sitting in – him on the dance-floor/stage and us all sat up in the chairs in the other half of the room. He gets a couple of volunteers down from the audience to demonstrate walking in straight lines, crossing the stage, passing each other. His patter, all the while, is gentle, calm, funny, personable. Even when he says “And, y’know, obviously in Israel we all know where straight lines lead: straight to Auschwitz” (paraphrase, but pretty much exactly that) it sounds like a – ha ha! – like a friendly joke. And, yeah, it just gets more and more mordant, combative and critical from there. Without a script I’m unwilling to just list more things he said. And I’d feel uncomfortable doing so. There’s a whole show here, and a context, and a line that moves through that context, and everything he says he says in a particular order for a particular reason, and says it about his home country. A country of which he despairs profoundly. This is not a matter of being a “self-hating-Jew” any more than despising Nigel Farage makes me a self-hating Englishman. Tashach’s questioning of how Israel conducts itself is no more undermines *the State of Israel itself* than my open and ongoing disgust with the Tory party threatens the existence of England. There is a better way of being Israel, the piece says.

Asher Lev’s Performing Art Through Ecstatic Pathways is a more diffuse, yet ultimately more specific, piece. It is (mostly) the seated/desk/laptop/mic/projection style of performance lecture. Lev starts off by explaining “his practice” to us. He’s interested in reaching altered states of consciousness through hyperventilation, vomiting, and something else. In this lecture he wants to concentrate on the first two. He tells us this slowly while at the same time typing what he’s saying on the laptop in front of him. He is quite a slow typist (but then presumably English isn’t his first language (or even his first keyboard)). It feels a bit ponderous and grates like anything. I’m not a big fan of “body art” at the best of times, and even less so a fan of people who use words like “shamanic”. And, as it happens, the first half of the show – so, maybe fifteen/twenty minutes – is extremely boring. He breathes hard and fast, and occasionally types a bit. I am resolutely unimpressed. The only reason I watch is because I figure I should occasionally challenge myself, and I’ve been having it all my own way, way too much recently. Then the whole thing suddenly completely changes gear. We seem to be completely done with hyperventilation, and we’re onto vomiting. Now, I wasn’t sure I’d be all that into this.

[I’m pretty squeamish. And I have hang ups about people making a freakshow of themselves. Even if it’s voluntary on their part, what it implies for the spectator is still unclear, and I feel further compromised by the fact that that I’m there professionally, rather than of my own volition (here especially, since I was just handed a bunch of tickets to *stuff*).]

As it turns out, “vomiting” as I’m going to call this section, is in fact a long diatribe against the current Israeli arts minister, Miri Regev , who is conducting “de facto censorship” (Lev’s exact words) against leftist artists whose work attacks Israel or “delegitimise” Israel (a kind of Israeli, arts-Gove, if you will). He has written her a letter, which he reads to us, while drinking a suspiciously unplesant-looking two litre carton of liquid. He has also written a reply he imagines she might send him, which he gets his computer to read while he finishing drinking a second carton. As the letter plays, with musical accompaniment and her smiling face beaming at us all from the screen, he takes a white plastic bowl and proceeds to vomit the liquid back up. It’s actually quite cathartic (also, bright blue, which is unexpected). As a response to any right-wing government’s arts policy, it seems like an entirely fitting response. Think Torycore, but with sick rather than death metal.

No conclusion-drawing here. The works (and my descriptions of them) speak for themselves, I hope.