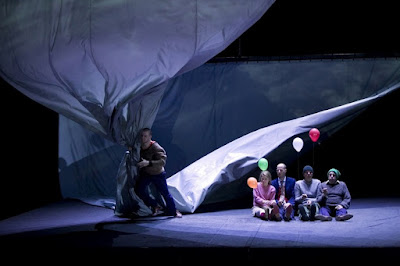 Staatsschauspiel Dresden’s Der geteilte Himmel (Divided Heaven) is a properly beautiful piece of theatre. Based on the novel by Christa Wolf, (adapted by Felicitas Zürcher, Tilmann Köhler, and the cast), this staging makes the meandering story both charming and sympathetic. I’m afraid it was also a victim of being the last show of the Festival and running at 2hrs30 without an interval (starting at eight), it *felt* *to me* like a play of diminishing returns. I’m pretty certain it wasn’t. I’d almost swear that it was my fault. But it’s hard to tell. The energy and the drama *do* seem to drop off slightly, but I bet to a fresh mind – and as the only play of the day – they’d stick with it.

I wouldn’t swear to it, though. The piece tells the story of a young woman growing up in the DDR. Starting in about 1961 (I think), it follows her getting her first job, meeting her first love and, subsequently, his defection to the West. Once he’s gone, the final half hour(?) or so lacks any real dynamic beyond their bickering and grumping. She takes up with another bloke (I think), and he’s all cross, etc. but he went away! And won’t come back! And she likes socialism! And OH, MAN. I’m not sure that the travails of young love are ever going to be the best way of exploring ideology. But then Divided Heaven isn’t really trying to anatomise divided post-war Deutschland, it really was – at least to my sleep-deprived little mind – just about the details, about the feelings, about what love feels like, and what working in a factory, and being shunted around work groups is/was like. And it’s very good on that. Perhaps it’s precisely because of this investment we as an audience make, that the last half hour of bitterness and recrimination is so hard.

The staging itself is also a thing of great beauty and playfulness. It also includes balloons.

Actually, even beyond the balloons, it reminded me *a lot* of the work of the excellent British director Ellen McDougall. It’s got that effortless tumbling-over-each-other style of storytelling – the first time I think I’ve really consciously seen it done by Germans – and that same brilliant improvisatory way that sees two men sitting down to a meal together each roll up a trouser leg and proceed to “eat” one anothers’ leg(s?).

Karoly Risz’s set is also a joy. A simple slight raked square stage-on-a-stage overhung by a billowing, white, sail-like cloth onto which is projected a landscape – illustrative, rather than any attempt at fitting it onto the stage as a naturalistic location. Then, quite a long way through, the square stage suddenly begins to rise until it’s an almost unclimb-able slope (with shades of the Berlin wall?). There’s also live bike-riding on stage, which, for no good reason at all, is something I really love too.

Yes, I was exhausted, but this was a lovely end to what had been a brilliant and challenging week at the Eurokontext festival. And I’m going to stop here, because this is sounding more and more like “what I did on my holidays” than proper criticism or analysis.
Posted by Andrew Haydon at 12:12