[for my John Donnelly disclaimers, see my The Seagull review] 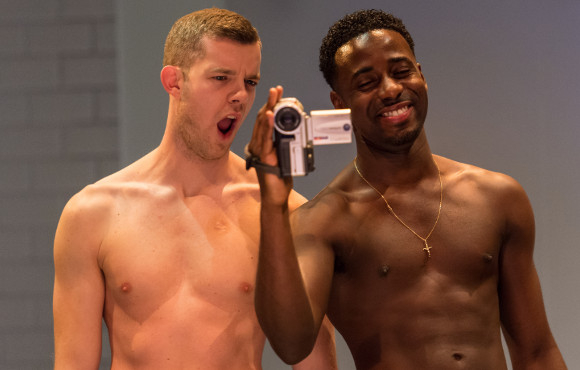 Thanks to a combination of circumstances, I ended up seeing an *unfixed* Blurred Lines in preview (last Saturday, the night after most critics saw The Pass on Friday night – for the record, I liked Blurred Lines very much indeed – and saw The Pass on Wednesday night, which was Blurred Lines’s press night). As a result of this, and my piece on equal representation; my interview with Hattie Morahan; and, well, y’know, culture in general; I’ve been thinking about “women” quite extensively recently. To the extent that ‘thinking about “men”’ feels like a bit of a retrograde step. But, on the face of it, The Pass, more even than Body of an American, is a play about men.

Actually, as it transpires, the fact that the action of the play mostly revolves around two men is largely incidental. In fact, weirdly, for my money, The Pass is more or less exactly the same play (arc-wise) as The Ritual Slaughter of Gorge Mastromas before it and Birdland (of which I’ve read an early draft) after. It is a play about a single-minded psychopath/sociopath who rapidly falls from the grace that they’ve clawed up around themselves. In this it could equally be compared to Hedda Gabler (although not many other plays with female central characters that I can think of).

This presents two immediate questions: is a single-minded, borderline-sociopathic, will-to-power in some way a particularly “male” trait (if we want to get into hateful gender essentialism)? And, possibly harder to answer: is there a particular British animus against succeeding that makes this narrative so familiar? I was thinking about this on the Tube home after watching the show and the only characters in English Literature who I could really remember getting what they wanted were mostly Jane Austen heroines. Anyone else in literature who wants, well, anything really, seems to end up getting royally fucked over because hubris, o’erweening ambition, etc. I think you have to turn to Disney before stuff starts working out for people who are trying to get something. And Disney was a fascist. So.

Of course this is a flawed argument. Theatre about people with moderate ambitions achieving them and being content having done so wouldn’t be very interesting. (Ok, it’s Twelfth Night, A Midsummer Night’s Dream and a bunch of other romantic comedies, but the modest aspirations, achievement of them and contentedness thereafter aren’t really the point, right?) Even so, it does end up making theatre look like it’s got a real downer on determination.

And so to The Pass. Russell Tovey spends much time in his pants as Jason, a footballer. We first meet him in his pants aged seventeen with his team-mate Ade (Gary Carr, also in his pants) in a hotel in Bulgaria the night before a crucial try-out match for... Oh, look, I don’t really understand about football, some try-out match for/against some team or something. The basics are: either he or Ade is going to get the gig depending on how they perform the day after this scene takes place. The pair – surprisingly spry, camp, literate and funny – talk for, oh, just ages, and pretty much flirt more than Julian and Sandy. There’s a deliberate nerviness to the scene which is, I think, slightly undercut by the fact that we’re pretty aware that – astonishing levels of buffness notwithstanding – they’re both actors, not footballers. It’s not going to feel that transgressive when they inevitably snog each other. But we get that it should. And being as it’s theatre, we’re prepared to play along and gasp inwardly. It’s an effective and funny scene. John Tiffany’s production has bags of charm and energy to spare. And it’s very watchable indeed.

The next scene wrong foots us slightly as the action has leapt forward seven years (we learn from the programme). Jason is still in a hotel room (Laura Hopkins’s design is an astroturfed stage in traverse with two posh hotel beds in the first scene getting bolted together for scene two. At one end there’s a balcony and at the other end a walk-in shower with frosted glass to preserve *a bit* of modesty for the actors who occasionally stand naked behind it). This time, though, he’s in the hotel room with Lyndsey; who, we gradually learn, is a table-dancer, and isn’t his wife. Jason and Lyndsey are obviously pretty cagey around each other. There’s a weird sense of No Lust Whatsoever considering it’s a scenario in which a hot footballer has picked up a hot lapdancer. There is a vague undercurrent of mistrust or paranoia, though. We get to wonder if this is for several reasons. Is it because Jason is actually gay and would rather just chat to Lyndsey? Or, Lyndsey, maybe she’d rather just be having a nice chat with Jason too. He seems quite nice, after all. Sensitive. Y’know? He talks about going and watching ballet, after all. But, no. Turns out that everything and everyone is a bit more cynical than that... [I won’t spoiler it.]

[interval. The running time of the whole is 2hrs20]

A third hotel room. And Ade’s back. It’s 12 years after scene one. Jason has become a Beckham amongst footballers, and Ade has become a happy, successful man with a boyfriend and a small business. Ade isn’t really sure why he’s back in a hotel room with Jason, and Jason doesn’t seem all that sure either. The atmosphere tries to be matey but curdles pretty fast. And then it just keeps getting darker. I thought at one point, when a young hotel porter turns up with a screwdriver Donnelly was going to plunge us right back to the mid-nineties and *that scene* in Shopping and Fucking or maybe everything was going to end up a bit Blasted. But mercifully for squeamish me, that threat just keeps hanging and never lands.

Indeed, a lot of things could happen in that final scene, and the sense of those possibilities never quite leaves. I’m not sure the play itself, as it stands, really wants us to come down hard on any single definition, or “answer” to the apparently pretty wretched place where Jason has wound up. I’m not sure we’re really being asked to judge him. I’m certainly not sure whether Donnelly is entirely suggesting – in a Sliding Doors kind of way – that one specific *pass* made aged 17 in a try-out football match, or the other pass, made in the hotel room the night before it, really go all the way to explaining a character. Arguably, yes, it was one or other of those which perhaps led to Jason having the career he had. But as the rest of the scene has shown, he’s also got a psychology that forces him to chase success in one given field at the calculated expense of every other field going. Until, at least, he becomes so wealthy that even success no longer really matters, so long as its trappings of wealth and feelings of untouchable superiority hold out.

As I said early on, it is strange that this trajectory is so very, horribly familiar. I kind of quite wonder what it’s for. I mean, beyond the obvious fact that it’s an exciting enough story to watch. And stories are there as much for the first hour and fifty minutes of tension and not knowing how it’s going to end, as they are for the ten minutes when they are ending and you’re faced with a kind of literary post-match analysis. But even so, this vindication of ‘being the mousey guy’ time and time again seems, what? Really unfair, almost. As I said, obviously drama needs some kind of, well, drama, to take the audience with it. But doesn’t this finger-wagging arc feel so well-worn that it could almost risk feeling a bit too pat?

It’s unfair to lay all this at Donnelly’s feet. He’s written a great play, and I’m using it as an excuse to wonder what, if anything, is the purpose of this apparent morality kick that theatre has been on since the ancient Greeks. I mean, is there even any sort of proof that this sort of trajectory teaches us valuable lessons? I mean, doesn’t looking at the rest of the world rather suggest that, in the main, people who push hard for what they want tend to get what they want, and don’t seem to suffer from spectacular cosmic retribution? Or is this a case of theatre providing us with a bit of escapist wish-fulfilment: confirming to us that actually, despite having more money than we could ever possibly dream of, footballers are actually deeply unhappy deep down?

Then there’s (briefly) “the gay thing”. If Jason is unhappy and conflicted at all (and, who knows? Maybe he’s not), then isn’t it boiling down to being “because he’s gay”? Of course, on one level, this is an attack on a world which makes it fine to be a billionaire psychopath, but where even then you have to go to extraordinary lengths to deny your same-sex preferences because marketability. But on another level, it feels a bit like an attack on someone for “not staying true to themselves”. And, worse, not being able to see that through. I think probably quite a lot of determined people can and do see that sort of thing through, and maybe it would be more interesting to see a play about someone succeeding on those terms, and deciding for ourselves (at least without a fall-from-grace plot) whether their compromises were worth it.

But this all feels like a lot of unfair carping. The Pass is really well done. Not least by Russell Tovey who really is a revelation here. I mean, sure, he was lovely in The History Boys, and he was good in all that TV stuff he’s done (at least, what I’ve seen of it), but this is actually one of those parts that really let’s an actor off the leash to do a bit of furniture chewing. And here he’s got that same hectoring energy that Rory Kinnear has, or a young Steven Mackintosh had.

Another interesting aspect that The Pass reveals – especially in the light of Blurred Lines – is that if theatre wants to have any stake in being sexy in a mimetic way (i.e. in providing persons for its audience to objectify) until make/female equality is achieved (ha), then this is probably the way forward. Essentially, if this were cross-cast, it would look not unlike the uncensored ‘Blurred Lines’ video. Two ridiculously shapely young men bounce around the stage for a vast majority of the stage time, and seem to pretty much rejoice in knowingly drinking up all the adoring gazes. The only woman who turns up basically keeps her modest attire in place all the way through (in the sense that she is dressed modestly, not that her attire is “modest” in the sense of “brevity is the soul of lingerie”). That said, it is interesting that, at the same time, the traverse staging maybe subconsciously makes it feel like our gaze is being “policed” by those in the audience opposite us.

So, much to think about. And much of it, for me, perhaps annoyingly extrinsic to the actual piece itself. But, yes: incredibly watchable play; fascinating stuff to think about the success/ambition story-arc; and the gender-near-nakedness thing is also interesting. And, y’know, a really well-written, well-realised play. Success!

[this being the internet, of course, no one can police your “gaze” here. 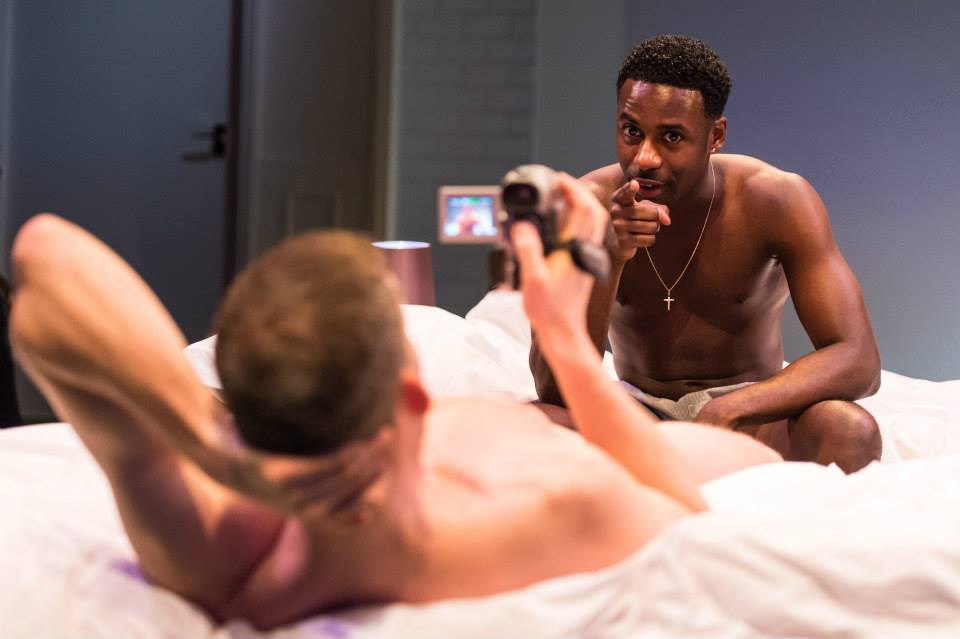 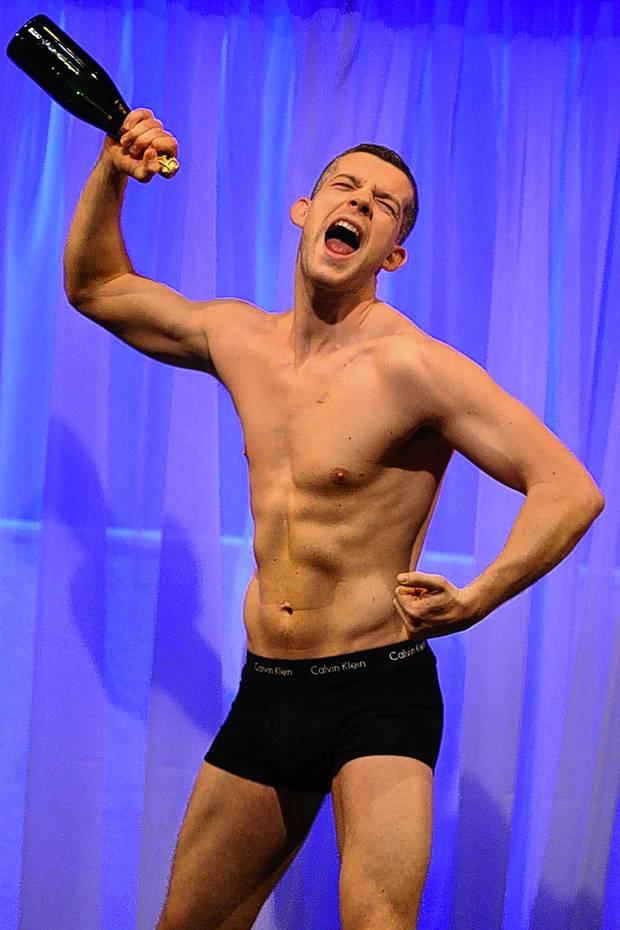