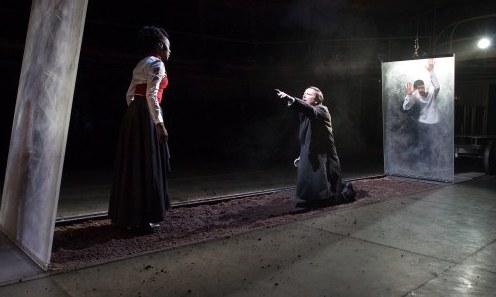 The new adaptation of Anna Karenina at the Royal Exchange is outstanding. Jo Clifford’s script feels so effortless that you forget that someone’s only just finished writing it*. [edit: apparently it's not new after all.]  Ellen McDougall’s production inhabits the Exchange’s in-the-round space with fluidity, grace and precision. Joanna Scotcher’s design is contemporary, intelligent and elegant. Lizzie Powell’s lighting: again effortless; again contemporary and stylish. Even Tom Gibbons’s sound design (that’s even the sound design, not even Tom Gibbons) is repeatedly noticeably doing really excellent things. And, blimey, what a great cast too. Across the two hour (-ish, plus interval) running time, they quietly convincingly put across these incredibly realised, changing, evolving, original versions of well-worn, pre-known characters that feel every bit as complex, human and readable as you could wish.

[Indeed, it’s tempting to note that the only weak link here is your critic, who is not the Tolstoy expert some might wish for. As such, I’m going to be considering this production pretty much as an original, albeit one that I know happens to be based on a story written by Russian man over 137 years ago (the date of final publication given by Wikipedia).]

With this much goodnness going on, it is difficult to know where to start, so perhaps the most logical place is the first thing you see, which is the poster: 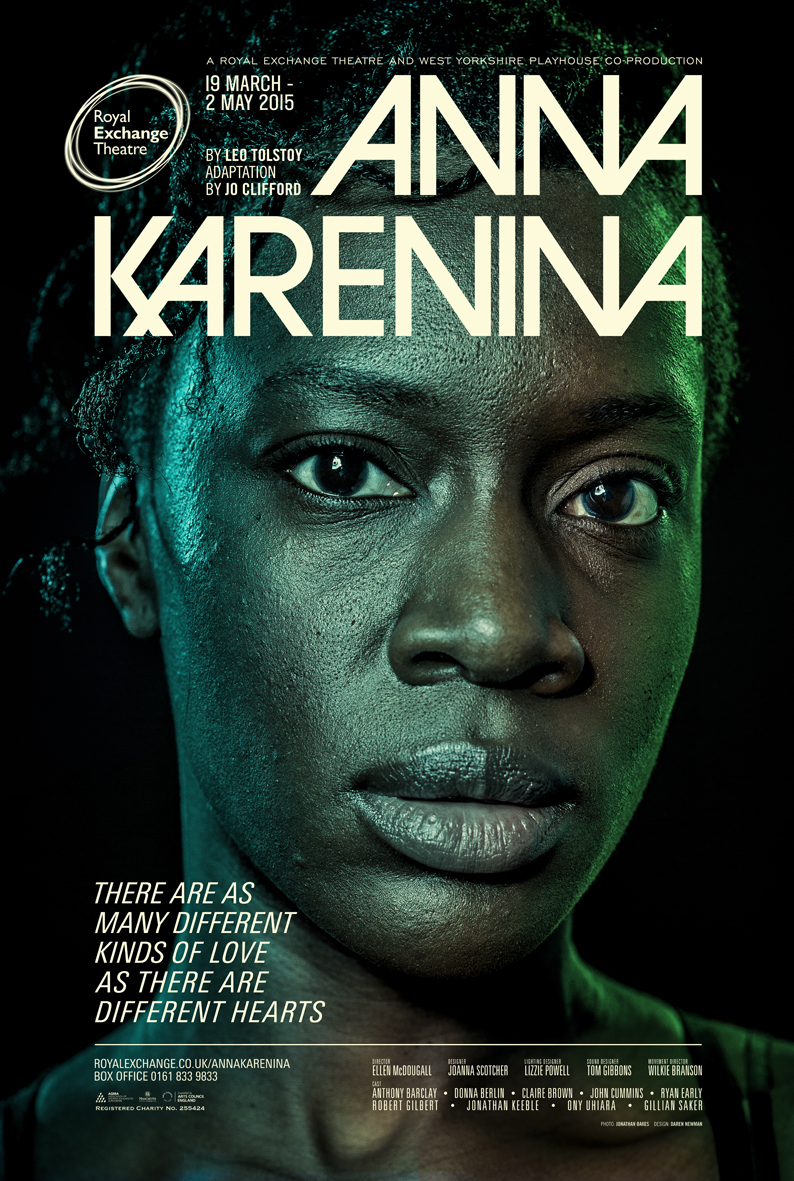 The observant amongst you will notice that Ony Uhiara, who plays Anna, is black. It’s worth noting that in fact in the last two nights I’ve seen more black actresses in leading roles (Titania and Puck in the Everyman’s MSND the night before) than I remember seeing on main stages of principle playhouses in London. Ever. And to think that people worried that I was going to find The North theatrically conservative. So far it’s making London look very backward indeed. So, yes, that’s a first unabashed good. And it sort of demonstrates how the production as a whole operates: It’s taken a pretty traditional, reppy choice of text-for-adaptation to get one lot of punters along, and then made damn sure its as far from comfortable, chocolate-boxy, period drama as possible to get the other lot of theatregoers interested. Politically, this seems about as astute as it gets.

That said, there’s nothing in this production to actually upset all but the most uptight (or racist) traditionalist. It’s not spitting bile and fury at traditional theatre. It doesn’t feel confrontational at all, in fact: it’s just like this incredibly well-oiled index of quality that is letting us know that it’s the 21st century and this is how we can do things now, if we like.

Scotcher’s design feels absolutely central to this. Across the stage, (straight left-to-right from my seat), run two metal train tracks. Those familiar with the novel will straightaway grasp the significance of these. On the tracks two adaptable metal-wheeled carts can roll in and out, sometimes dressed with a simple white tablecloth to stand in for tables, beds, etc, sometimes without as unspecified chunks of industry. At the very centre of the stage, between the tracks, is a patch of raw earth. (Which, weirdly, echoes the sandpit and the pool in the two previous productions by McDougall I saw. AK also makes use of McDougall’s now-traditional balloon motif, although here the balloons are only playing balloons).

This motif of mud at the centre of a clean modern stage works *so well* though. On one level it symbolises the whole problem central to the narrative – the dirt just below the surface of civilisation, the mucky problem of desire, “the foul rag and bone shop of the heart” as Yeats has it. It also speaks eloquently to the character Levin’s concerns that his (landed gentry) strata of society has lost touch with the very soil they own. And then, just on simple aesthetic grounds, the fact of having something in which characters’ clothes get dirty; mud that gets tramped around the stage; feels incredibly necessary to combat the often antiseptic sets in which theatrical worlds sometimes find themselves trapped. Initially all but the smallest rectangle of this dirt is covered, but towards the end of the first half there’s a neat design coup which, very simply, edges toward the theatrical power of *that ending* in *that* A View From the Bridge.

But, Jesus; so far I’ve just reviewed the whole thing as if it was a clever installation with a poster. There are actors. And a plot. And writing. Pretty much every actor in the show deserves a whole review of their own for the myriad subtleties that they bring to it. Ryan Early as the spivvy misogynist Oblonsky (Anna’s brother) invests the part with a terrific nervous energy which he also projects outwards, serving as the audience’s unsavoury way in to the story, and contrasting with the handsome but almost unreadable Vronsky (Robert Gilbert), whose perspective on events seems tightly reigned in. This contrasts again with Jonathan Keeble’s Karenin, who manages the neat trick of losing all our sympathy by going from incredibly-dull-but-reasonable-enough kind of bloke who gets royally fucked over to someone who having submerged all their grief and disappointment in religion and Conservatism, turns into an utter git. Gillian Saker manages to invest a credible heart into the potentially thankless part of Katy (I think Clifford has turned all patronymics into British equivalent name-shortenings. Smart) – one of those women in literature-by-men (and Jane Austen) who would otherwise mostly be defined by how she’s a bit silly and in love with someone (see also: Helena, yesterday). Perhaps most tragic and touching is the bald, bearded John Cummins as Levin, whose whole physicality achieves an almost sculptural noble disappointment in human form. (I say noble: obviously, as a landowner, his apparent haplessness in the face of all the misery he causes, and his blindness to that fact, is more bitter irony than cause-for-sympathy – that Cummins so successfully humanises Levin’s suffering is subtle indeed). Clare Brown, Anthony Barclay and Donna Berlin as “Dolly” (Oblonsky’s wife), Prince Scherbatsky (Katy’s dad) and a peasant (two peasants?) and (Vronsky’s mum) are all also great in their smaller roles.

It is perhaps Anna (Ony Uhiara) who is the biggest puzzle here, though. Uhiara is excellent at inhabiting Anna with a thoroughly modern and 3D sensibility, while at the same time never severing the historical specificity in which Anna’s problems are grounded (a husband who won’t divorce her, a society scandalised by affairs, etc.). However, perhaps partly because of this very modern-feeling production (and maybe because everything feels so contemporary, the attitudes become all the more shocking and alien), Anna’s tragedy does seem as much one of selfishness or arrogrance (think Coriolanus) as much as one of her tragic misunderstandings and the appalling society by which she is surrounded. (This would be where it might have been helpful to read the book – although I’m firmly of the view that if you haven’t ever read the source text before (ideally about five or more years before), reading it just ahead of seeing the adaptation is *far* worse than not having read it at all).

By the end Anna appears to have driven herself mad by fucking her hormones with repeated abortions (if I understood the euphemisms correctly) in the mistaken belief that Vronsky would prefer her childless – even as he despairs of his lack of an heir. In this, it feels perhaps more to do with the Russian love of dramatic irony and a worldview that seems unable to conceive of anything than everything ending in utter desolation more than *gender*. But that Anna is a woman invented by a male author does make this ultimate doom seem like a gendered question. Yes, she’s a strong female central character, but then she is ultimately destroyed by the male novelist who created her, and possibly in a move that could easily be read as either punishment or “an inevitability”. So, yes, tricky, that, and not, I don’t think, a problem entirely addressed here. Although, the production is admirably unequivocal about the fact that the men surrounding Anna are terrible, and often so lost in self-pity that they are incapable of even beginning to see their own privilege. But, yeah, Russian literature: rarely cheery.

Nevertheless, lack of a heart-warming ending notwithstanding, this is one of the best new things I’ve seen in the UK this year so far. If you live in Manchester (or nearby) then definitely come and see it. If you live further afield, then maybe start looking into cheap advance train tickets right now. Superlative work.

*What a weird sentiment, but you know what I mean, right? New Writing usually tends to feel a bit like new anything else – like it needs a bit of time for the crackly crispness to wear off before it’s comfortable, yes?
Posted by Andrew Haydon at 11:30

It's not remotely controversial to sugggest Tolstoy was a raging misogynist, it's well established fact. (If you don't believe me, read The Kreutzer Sonata and its associated commentary, including Tolstoy's wife's riposte. Talk about punishing your female characters!)

Tolstoy's views on women, sexuality and humanity in general are so vile and self-hating even Chekhov, who idolised him otherwise, felt discomfited. (Tolstoy praised his satirical story The Darling whose female protagonist is a long suffering helpless female stereotype. Tolstoy understood the point of the story, but nevertheless held her up as a womanly ideal.)

Tolstoy was an extraordinary talent but his reputation for depth is unearned and Anna Karenina is hardly a picture of empathy - it's often both sentimental and judgemental. This was unfortunately more the rule than the exception in his work.