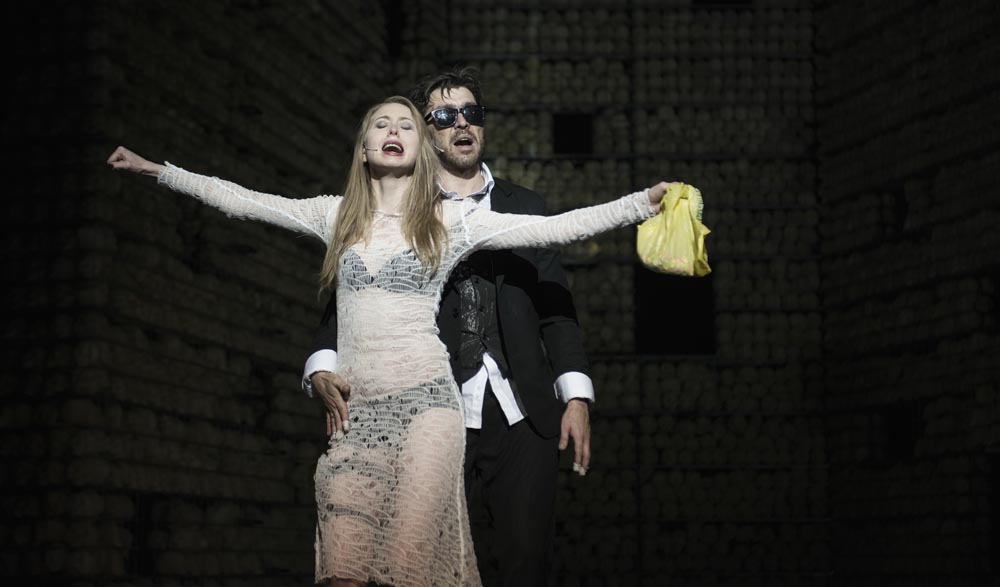 To Damascus (Do Damaszku) is basically Strindberg’s Birdland. That is to say, like Birdland’s plot source, Baal, before it, it’s his take on the “station drama”. A play in which a central character – like Christ in the stations of the cross – moves through an oblique landscape coming across various people en route.

In this story, The Stranger rips into town and encounters The Lady. This being a production by former enfant terrible of Polish theatre Jan Klata (Sprawa Dantona, Transfer, and H that I’ve seen), he does so on a Harley-styled bicycle, wearing a sharp suit and shades, to the backing of an eclectic range of rock and dance music, and against a backdrop of skulls piled in cages, reminiscent of a Cambodian memorial to those slaughtered by the Khmer Rouge (design, Mirek Kaczmarek). And he’s played by Marcin Czarnik, previously Klata’s Hamlet and Robespierre. In the first five minutes we get a children’s choir singing ‘Space Oddity’, Lou Reed’s ‘The Kids’, and the Stooges’ ‘I Wanna Be Your Dog’. Similarly, The Lady (Jaśmina Polak) is wearing a see-thru white dress over a Lara Croft style shorts, leg-holster and bra, and has a mean line in rug-cutting.

There’s an enjoyable openness to these rangy opening minutes. A kind of louche, mittel-Europa, town square version of Bonnie and Clyde, True Romance, or Wild at Heart. But there is a bit of a problem too: while Strindberg’s text has been hailed for its rich tapestry of allusions, it does want for a bit of actual narrative drive. Or rather, if there is a central drive here, then it’s basically so male-centric as to be actively offensive in the 21st century. An aspect of the play that Klata’s production does little to diffuse. Basically, it’s all about The Stranger’s careering self-regard, his desire to get off with The Lady – whom he re-Christens “Eve” – but also about not getting himself ensnared in her apparently actual witchy goings on. Which speaks volumes about Strindberg’s problems with girls, but not so very much about anything immediately relatable.

There’s much to enjoy in the production. For the first hour or so I was more than happy watching the thing rock along from improbable scenario to improbable scenario, commented on by a duo of mystical baroque opera sopranos wearing costumes that consisted of a kind of necklace of life-size heads each with flowing long hair that constituted a kind of robe: 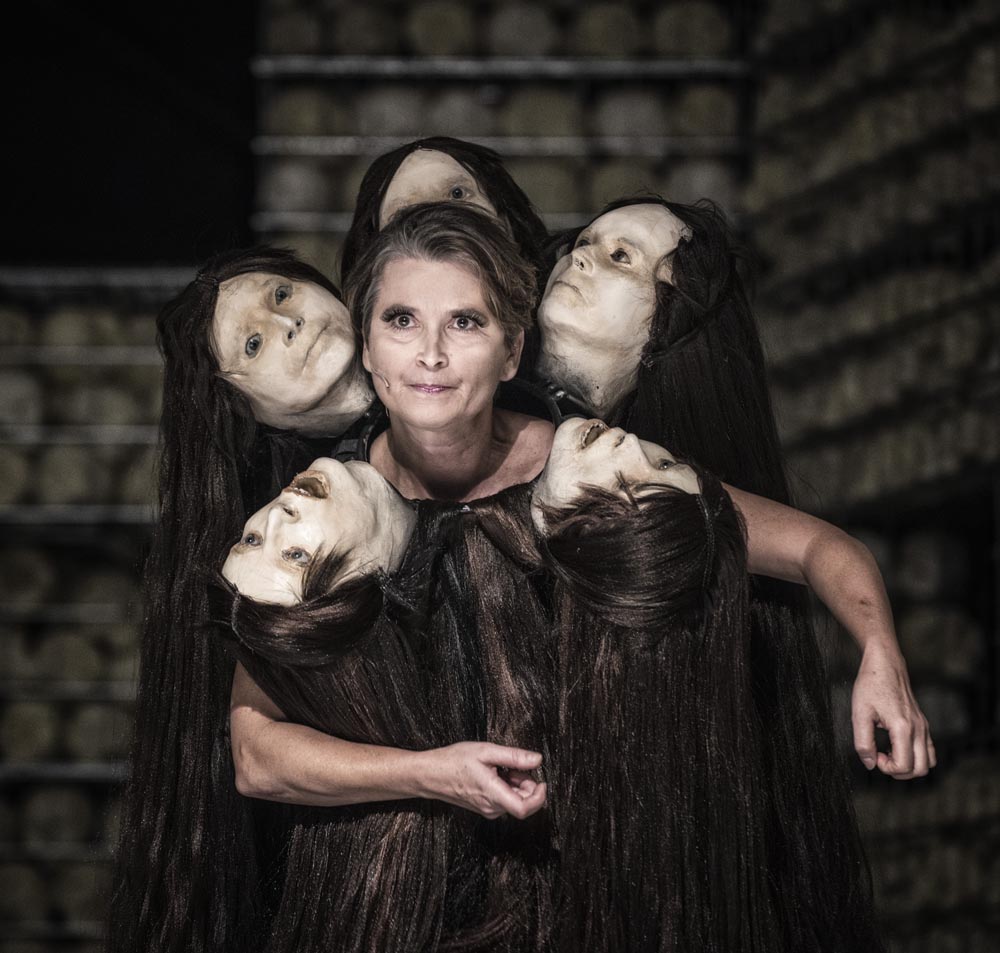 I’m not sure if these are in the original or not (of course I’ve never read it, let alone seen it before. Apparently the last UK production worth mentioning on Wikipedia was at the Trav in 1975 – the year before I was born). Along with the intensely loud rock or dance music, though, they are hugely entertaining. There is an interesting thing that happens almost exctly an hour in. There’s a blackout that has no music. And you can tell it’s where the interval would have been if they weren’t saving time here by running everything without an interval. And, my God, can you feel a) the need for the interval, and b) the tension absolutely bleed away as soon as it happens. The second half, inexplicably, suddenly just feels like a long hard slog. I don’t think I’ve ever experienced quite such a precise moment of knowing exactly where a play completely lost my interest.

Which is all somewhat self-indulgent toss (on my part), of course. But then, there is also a sense that Klata is just marking time here. Compared to the all-out energy of his Hamlet (H) and Danton Case, this feels like he and his dramaturg, Sebastian Majewski, just haven’t really got anything to say with or about the piece. The way it’s staged is serviceable enough, and the performances benefit from a kind of liveness and almost improvisatory feel that has little equivalent on the British stage – think Mark Rylance. But just rehashing Klata’s shtick of chucking a bunch of loud music at some great acting and a strong set doesn’t seem enough to either lift the philosophical script up to match the energy being evoked, or provide enough depth for the ideas of the script itself to be dissected or critiqued.

All of which is a tremendous pity, given a) how well it started, and b) how unlikely it is that I’m ever going to see another production (because rarely performed, not “put-off-for-life”).

On a wider, Festival-level, though, I am increasingly impressed by the sheer number of big name/big ticket productions that have been brought to this Festival. For a variety of reasons, I was just reading back some of the blogs I wrote for the Guardian the year I was doing the LIFT/FIT Mobile Lab, and Klata was one of the three directors I name-checked then as being one of the foremost/most talked-about in Europe who had “never had productions staged in the UK” (I was wrong about Alvis Hermanis, and Stefan Kaegi has now, but...). Obviously this review (among others), probably isn’t going to do much to excite interest in an immediate transfer, but it still feels like a pity that British audiences can’t even be involved in a conversation about the decline of his work in recent years. (Not a universally held opinion, btw. This production was still selected for Warsaw Theatre Meetings ‘14.)

(Dear God, I really am going to have to tidy this review up a bit when I’ve got a bit of distance.)

I leave you with this excellent summation of Stringberg’s gender politics: