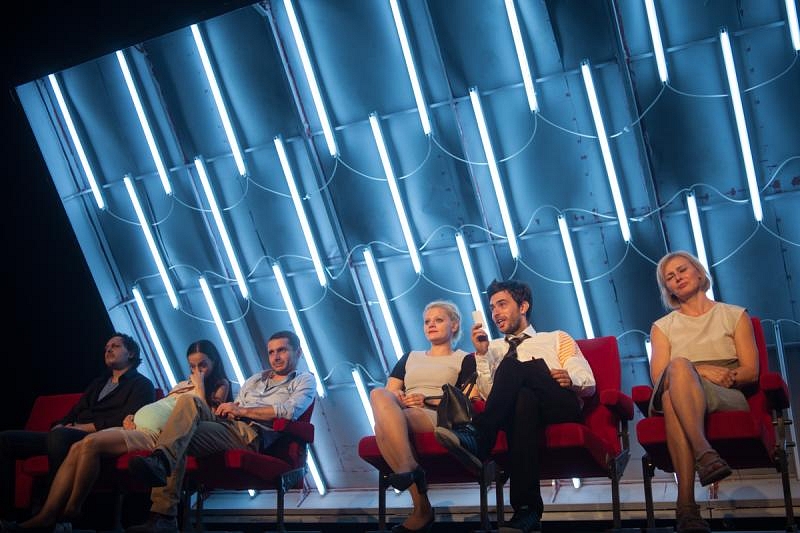 There’s a funny thing that happens in reviewing sometimes: you see a show, don’t really think you like it, and then manage to explain why in a way that highlights precisely why you were the wrong person to have seen it in the first place. Or at least, explain it in a way that highlights the naïveté of your perspective. An excellent example can be found in the reactions to my review of (a rehearsal of) Gianina Cărbunariu’s last piece, Tipografic Majuscul (then called Performative Archive?). I did that thing where you approach something with such a level of arch contempt that you come across much worse than you could ever hope to make the work sound. On the other hand, recognising this is a bloody useful process. I think as a result of that review, I’ve had to radically re-think the way that I relate to the theatre I see in other countries. That “documentary” or “verbatim” theatre in Romania doesn’t really relate to its British cousins at all. Or rather, it might absolutely, but what they’re achieving by existing seem to be radically at odds; that a one-size-fits-all analysis of a theatrical form, shorn of context, is no kind of analysis at all.

All that said, Cărbunariu’s new piece isn’t “verbatim theatre” at all. Instead what we have in Solitaritate (the best translation is obviously solitarity – a pun on solidarity, replacing the same one letter and creating a word that – sounding like it derives from solitude – means the precise opposite). This punning meaning is precisely what the piece explores. Through a series of playlets, or extended sketches (all unrelated-by-character, as far as I could tell) Cărbunariu looks at her post-socialist homeland and sees individualism masquerading as solidarity, or just naked self-interest.

In the first scene, the actors enter the theatre and, dressed in cheap business suits, begin dividing up the seating amongst themselves. Who wants to buy up which job lot of seats. There’s a lot of extended playing with meta-theatricality – including, hilariously, given my grumpy balcony-based review from this same theatre yesterday, a damning assessment of the view from that very balcony – and the gradual building-up of a metaphor about audience passivity and public apathy as state assets are auctioned of to wealthy private individuals. Ringing any British bells yet? Leaving aside the arguments one could have about the assessments of how a theatre may or may not function, it’s genuinely jaw-dropping how much of this scene would transfer word for word into a critique of precisely the same issues back home. For all that Nigel Farage might wish it otherwise, and even in the wake of a British election fought largely over whether Britons want Romanian neighbours, it turns out that under capitalism we appear to have far more in common than either country might suspect.

The second scene surprises in the same way. It’s a satire about a middle-class couple who are arguing in the fall out from their child calling their Filipino au pair “mummy”. Quite. Who knew? Indeed, the scene could almost have come straight from a Martin Crimp piece satirising precisely the same thing in contemporary Britain (and it’s not the last time it feels like there are – undoubtless coincidental – comparisons between this and In The Republic of Happiness).

I don’t want to obsessively match every aspect of the piece to something tangibly British, or to view it specifically/deliberately through an English lens (although, as a Brit, I’m not sure what other options are open, we’ve only got the cultural background we’ve got, and the best anyone can do is flag up an awareness of that), but thanks to the astonishing, relentless battering that most of the British press has been giving Romania recently it seems especially important to flag up how many similarities there are between our two cultures – how this could play, nationality-unattributed, downstairs at the Royal Court, and how so much of it would still map onto the UK.

At the same time there are crucial differences, too. This is, after all, a deeply self-critical Romanian piece, so the appalling decision in one town to build a wall between the “Romanian” and “Roma” side of a road is also ripped apart. Similarly, the next scene, where the Filipino au pair has a monologue, but has to be played by a white actress because there are no Filipino actresses in Romania is obviously the flip-side of the questions about representation-on-stage facing Britain.

Elsewhere, an extended skit set in the funeral of a much-loved actress probably scores far more hits-per-minute if one knows what’s being satirised. The gist is plain, and plenty of the broader jokes still land, but without full-on local knowledge, it’s difficult to provide a fuller analysis than that.

The penultimate scene – in which the actors are lined up across the stage in chairs – was so like Dominic Cooke’s staging of the middle section Republic... (or the opening of Gorge Mastromas) that, if it weren’t such an obvious way of putting actors on a stage, I’d have inferred influence. Here, however, there’s the neat addition of a giant sun-bed like back wall, which gradually, intimidatingly lowers toward the actors. Really nice bit of design work (by [no programme]), (although somewhat compromised by a lighting design bathing all the actors in a nasty general-cover orange wash, which feels like the missed lighting opportunity of a lifetime (hyperbole)). The style of exchange here is also similarly terse back and forths and maxims from lives under capitalism. The scene ends with the “sun-bed” fully lowered, revealling a massive city plan with the previously discussed national cathedral to be restored for “national pride”. A young man delivers a final soliloquy perched on the front as if about to throw himself off the highest building on the plan.

What is fascinating – coming from Britain, where abuse of Romania seems in danger of fast becoming a national pastime – is seeing a piece that attacks Romania with any degree of actual insight. And attacks it, not out of reasons of racism or a sense of superiority, but out of a critical desire to make it better. And when you get to see that, when you see a proper hardcore “state-of-the-nation” critique, you suddenly realise that so many of the problems facing Romania are incredibly similar to the problems facing Britain. Including, ironically, its own internal market in racism. It would be funny if it wasn’t so tragic. 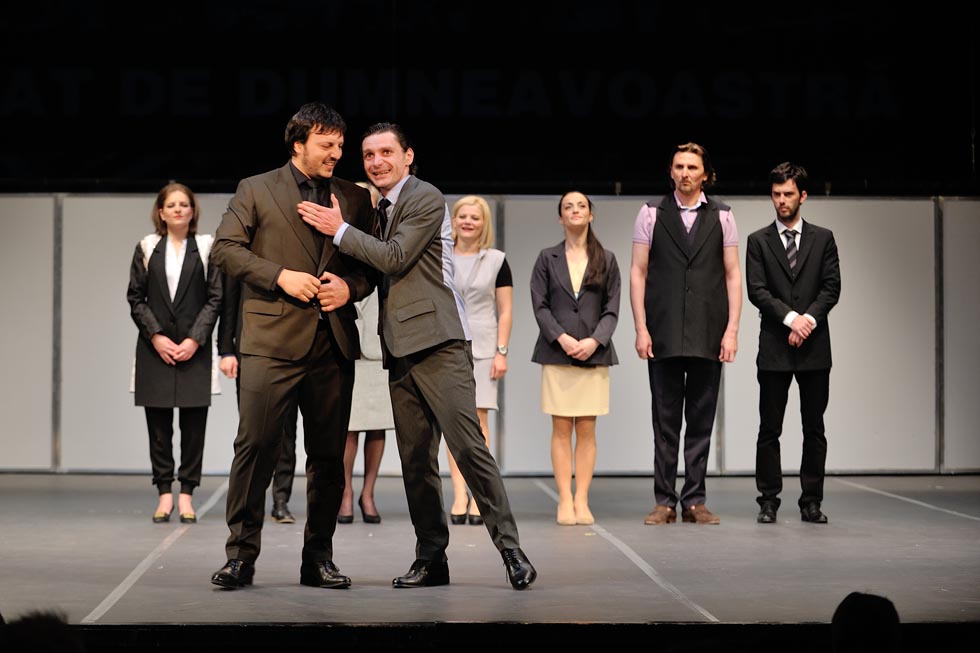