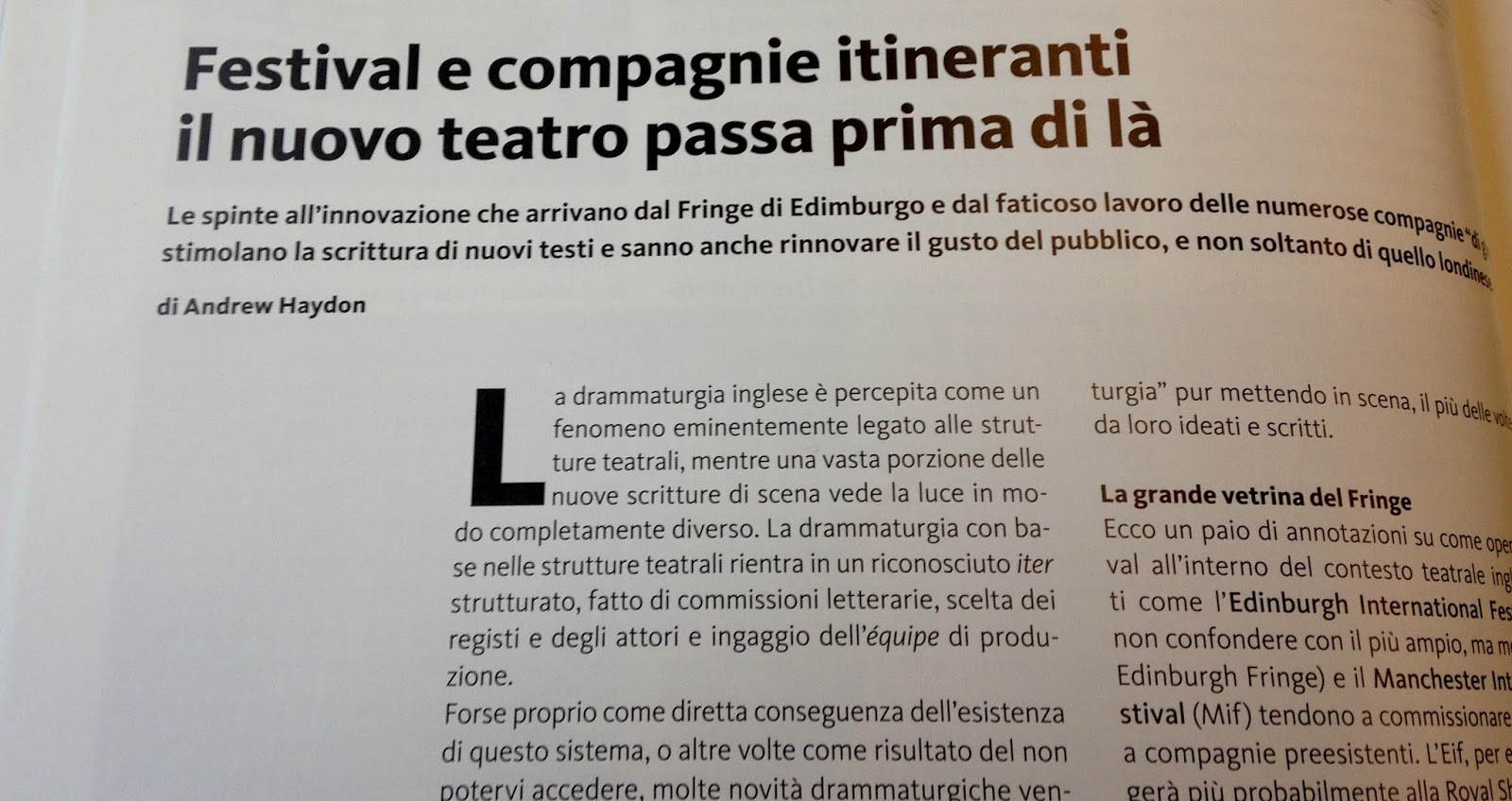 [Ok, so I got a brief to write two pieces for the Italian theatre magazine Hystrio about new plays in Britain divided into the slightly arbitrary “buildings” and “festivals”. I tried to follow the brief as closely as possible, with the result that both pieces feel a bit odd and counter-intuitive. I’m still not really sure what I think of them, but here they are. I think there might be a bit of original thinking forced out by the strange parameters...]

New Writing in Britain tends to be thought of largely as a building-based phenomenon. However, in fact, a vast proportion of the new writing that takes place in Britain actually comes into being in an entirely different way. With building-based New Writing, there tends to be quite an accepted structure of commissioning, directors being chosen, actors cast, and production teams assembled.

Perhaps directly as a consequence of these structures, or at other times just as result of having no access to them, a lot of other new writing is presented by independent companies. Sometimes Arts Council funded, much more frequently not. And, paradoxically, sometimes in buildings that are also New Writing Theatres – the Soho Theatre in London in particular takes in a lot of the bigger companies of this sort, as does the Traverse Theatre in Edinburgh, especially during the Edinburgh Fringe Festival.

Indeed, it feels faintly revolutionary to consider British new writing in terms of companies and festivals. It makes you realise how much the “official history” of “New Writing” is a simple chronology of the works programmed by New Writing Theatres like the Royal Court or the Bush, when in fact some of the most interesting work is being made by companies who frequently might not even call themselves “New Writing Companies” even if they are performing newly written or devised texts most of the time.

To consider the “festival” element first, it is important to make a couple of notes about how festivals operate in the British theatre context. Giants like the Edinburgh International Festival (not to be confused with the much bigger, but significantly less funded Edinburgh Fringe) and Manchester International Festivals do have the ability to commission new pieces of theatre. However, they tend to commission pieces through a pre-existing company – the EIF, for example, will much more likely commission something from the RSC or the National Theatre of Scotland than simply asking a writer for a new play and producing it themselves. Similarly, the MIF tends to hang its new commissions off specific names – the auteur Robert Wilson, the actor/director Kenneth Branagh, the company Punchdrunk, for example. As such, these Festivals don’t really play any part in driving Britain’s New Writing ecology. Conversely, things like the Edinburgh Fringe – precisely because its chaotic lack of any structure at all – plays an invaluable part in the new writing culture.

Perhaps “chaotic lack of structure” is an unfair way of describing the Edinburgh Fringe. In fact, it operates more like a hierarchy of moneyed venues. Theatre critics tend to to operate a top-down policy for reviewing, which in itself feeds vicious(/or virtuous, depending on your viewpoint,) cycle of popularity. At the top of the tree is the Traverse Theatre, next down are the “Big Four” venues – the Underbelly, the Assembly Rooms, The Pleasance and the Gilded Balloon. These all programme a mixture of theatre, comedy and music. The theatre at these venues tends to be new writing by promising young writers, more-often-than-not performed by recent graduates of drama schools or universities. They will generally be self-produced, raising the ever-climbing costs of performing at the Fringe privately, or, now, by “crowd-funding”.

This completely independent scene, where – at its most buccaneering – all that it takes to get a play staged is for the author to raise the money to hire and venue and persuade a few actors to take part, is a crucial element to understanding how some of British theatre operates. In theory, it is ruthlessly commercial. In practice, barely anyone ever makes any money out of it (at least, no one, except whoever ultimately owns the building in which the plays take place). It is generally done “for love”, or, more cynically, in the hope of recognition and incredibly rapid career advancement.

The Edinburgh Fringe, at its best, operates like a massive trade fair where, in theory, writers, directors and actors can all showcase themselves to their best advantage; can make precisely the work they most want to make (or think audiences will flock to); while the critics, programmers, artistic directors, and literary managers who attend can pick out “the stars of the future”. And, it’s true, a few careers can be made this way – in a period that sometimes feels like “overnight”. Mostly, however, given the sheer numbers involved, thousands more careers necessarily never get out of the starting blocks. But this “free market” approach to “art” is key to understanding how theatre gets made in Britain – because while at least the “top end” of the Fringe is taken reasonably seriously by critics and theatre managers, there is a place where the only qualification needed is a good piece of work. Nothing like the more rigid structures in place in theatre cultures like Germany or Russia – especially in the case of their directors, dramaturgs, and actors, who all seem to need to have trained and enter the profession in a series of quite rigid steps. (Perhaps this is unfair, but it’s certainly my impression. And while those routes also exist in the UK and vice versa, on the whole there is a greater variety of ways into a successful theatre career in the UK.)

It is interesting to note the centrality of the Edinburgh Fringe Festival in the British theatre calendar (and Britain’s relation to international festivals). There are of course other festivals – the Manchester International Festival being perhaps the only comparably sized, with Brighton coming in some way behind that, certainly in terms of importance. The Manchester Festival, not being primarily concerned with theatre seems to only really offer only a couple of significant productions a year – generally generated by some of the older, more grotesque giants of the international festival scene (cf. Robert bloody Wilson). Brighton tends to import its greatest hits from the previous year’s Edinburgh Fringe, or else serve as a testing ground for the forthcoming one.

Indeed, one gets a sense, going round some of the summer Festivals – PULSE in Ipswich, the Norfolk & Norwich Festival, the theatre tent at Latitude, the “Almeida Festival” as was, and even to an extent, the itinerant SPILL festival – that these have become dependent on a market of artists and companies with a desire to present “scratch performances” or works-in-progress ahead of the dominant Edinburgh showcase – or else, to tour a previous year’s surprise Edinburgh hit. The net result being, if you go to all those festivals you can pretty much claim to have seen half of what you would have wanted to see at Edinburgh, or else you could largely dispense with any of the previous Festivals safe in the knowledge that anything popular will almost certainly turn up in Edinburgh or else tour subsequently.

The existence of Edinburgh, these other festivals, and also a network of smaller venues designed for companies to tour work to, also explains the existence of the almost countless theatre companies in the UK. And, increasingly, these are also interested in producing new writing. Where in the recent past companies in Britain tended to mostly create devised work, which was seldom being made in mainstream theatres, there is now a far larger number of companies which either commission writers, or sometimes are formed by a writer, or a director with a writer or two firmly in mind for the creation for their work. This feels partly like a return to the 1970s when the majority of famous British companies – Hull Truck, Portable, Shared Experience, Joint Stock, Monstrous Regiment – were also dedicated to New Writing. There is also – thanks in part to the increasing influence of “European” styles – an increase in the blurring of lines between what is “devised” work an what is “new writing” in this sector. Devisers will hire a writer, writers will see their work “devised”-around more by directors and/or ensemble companies.

The proliferation of independent companies in Britain throws up a few interesting problems. Where once the forming of a company tended to represent a fairly radical act, and signal a desire to make work that ran against the prevailing trends of the “mainstream” – often politically or formally much more radical than anything that would be produced in the mainstream, perhaps with the company also run along politically principled lines – it can now feel like the forming of a company is little more than the exhibition of a few individuals’ desire to bomb their way to the mainstream table bypassing the normal, perhaps more tedious, “proper channels”. At the same time, another problem that companies can create – especially in a recession during which funding to theatre has been significantly cut – is that they might often not be paying themselves (or paying themselves even minimum wages), and by working for free, making negotiations more difficult for artists needing to be paid for their work. This problem is exacerbated by the Edinburgh Fringe which almost exists to make money out of the companies performing their new work, or else, in the case on smaller touring venues, understandably want to pay as little as possible for the work they show, because of their own straitened financial circumstances.

However, the massive up-side of having a resurgent touring companies sector, often specialising in the production of new plays (or at least with that brief forming a significant part of their remit), companies such as Headlong, National Theatre Wales, HighTide, Clean Break and Paines Plough are gradually reviving the fortunes of the imaginatively directed new play around the country and not just in London, leading now to a real revivification in the way that new writing can be approached in regional theatres, where more conservative approaches had hitherto prevailed.
Posted by Andrew Haydon at 00:41