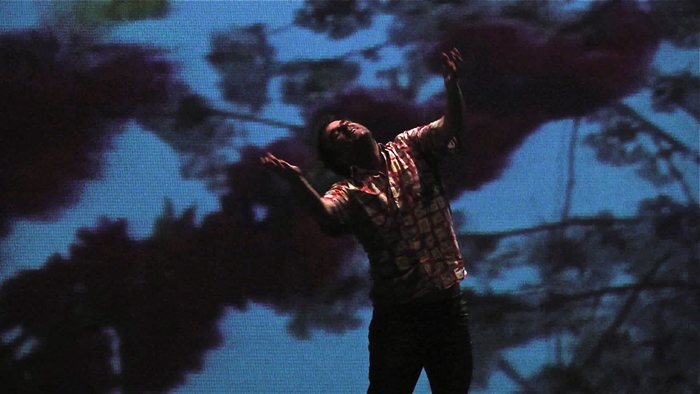 Pippo Delbono is new to me and since seeing the show last night I’ve been scrabbling around for a bit of context. As this relatively old interview with the New York Times attests, that is pretty much my fault. He’s apparently pretty big. He even made a piece for the Complete Works season in Stratford. The reason I wanted context was, bluntly, wanting to know why on earth I’d just had to sit through the previous two hours of Not-My-Thing-At-All.

Plausibly it all boils down to a matter of taste. The best case scenario is that Delbono is a big-hearted, sincere, socially-engaged theatre maker, whose sense of the aesthetic just chimes very little with my own. The worst case is that he is also a monstrous egomaniac, over-fond of his own voice, whose grasp of stagecraft is slipshod at best and whose use of performers is worryingly exploitative.

L’Orchidee (The Orchid) is possibly his response to the death of his mother, which, on one hand, is totally fair enough, and, on the other, feels like we’re being co-opted into a therapy session which really should have remained private.

The usual announcement about switching off your mobile phones at the start of the piece segues into a rambling monologue about the death of the – at that point unidentified – speaker’s mother (“but I understand why you’d want to leave your phones on. I am always taking photos, filming things... I even filmed my mother while she was dying...”): recollections about what she was like, her life, and so on. In fairness, it is quite charming, even if the speaker does have a hideous tendency to luxuriate in Every. Single. Sodding. (Italian.) Word.

[Admission: I guess languages are also a taste thing. For whatever reason, beyond one’s control, some resonate deeply while others grate like nothing else. Not really sure what one can do about that. I’m not even sure it’s *Italian*, per se, so much as Delbono’s way of speaking it.]

Anyway, The Voice introduces Pictro Mascagni’s opera Nero, a work from 1935 which was played before Mussolini once, Il Duce didn’t like it and the run was cancelled. As the opera plays, one of the Delbono company, Gianluca Ballarè, who has Downs syndrome, stands on stage and mimes to the singing dressed in a kitsch mock-up of a Roman Emperor’s robes.

A YouTube video of a French woman explaining how homosexuality is “against nature” plays. Delbono recalls that his mother bathed he and his sister separately, leading him to assumed that male and female bodies were the same – “which may be why I got confused later” he jokes. Deep Purple’s 'Child In Time' is played. The last time I heard this in a theatre was in Thalheimer’s Faust, and if it had any power here, it was largely as a by product of evoking that for me. Another company member, Bobo, enters, he is eighty-something, mute, and Pippo “met him when he was in an institution for the mentally ill”.  Again, it feels like there’s a best and worst case scenario here. Either Delbono is giving a platform to those usually denied one, or else he is exploiting the most oppressed in the name of creating “edgy” visual spectacle. I suspect it’s actually both. Compared with Back To Back’s Ganesh Versus the Third Reich or Food Court, it looks remarkably careless, cavalier, uninterrogated, and un-thought-through.

Speaking of “signifying nothing” there’s also *a lot* of Shakespeare used here, as well as a bit of The Cherry Orchard – the bit about cutting it down, obvs. What it, and all the Shakespeare adds up to I couldn’t say. It’s all Romeo (balcony and suicide), and Hamlet (where he talks about suicide). It doesn’t mesh with anything. It doesn’t form any sort of a dialectic. It floats, unmoored to anything, and delivered with such a level of hysteria (Delbono into mic) that if I hadn’t been reading it as surtitles I doubt I’d have understood a word. Still, good to know what Hamlet would sound like if his speeches had been delivered by a fascist dictator.

Elsewhere a revolutionary with a megaphone (presumably representing an earlier-mentioned friend, an imprisoned member of the Red Brigades), shouts more slogans, which, until concrete demands appear, also sound like they might equally hail from the “revolution” demanded by the American right, or indeed Italy’s fascists. At another point, Delbono attempts to cajole and then bully the audience into chair-dancing along with the rest of his company. He might think it’s a nice touch of unity and one-ness, but I’m with the Germans on this one – large halls full of everyone all doing the same thing in unison because the guy at the front says so tend to end badly. It was reassuring to see so few of the audience take up the offer. In another section, the origin of the titular orchid is given as the suicide of a “beautiful boy” who grows breasts and consequently flings himself off a cliff sprouting flowers from the ground on which he lands. Then we see some footage of a preying mantis that looks like an orchid eating a beetle.

Toward the very end, Delbono even goes so far as to show us what I can only assume is the actual phone camera video footage of his actual mother on her actual death-bed, reciting St Augustine. Sure, it’s his mum, and his footage, and he’s within his rights to show it to us, in a large theatre, and indeed to tour the world doing so. At the same time, it feels exploitative and cheap, as does the following section in which Ballarè and another performer strip naked and embrace (in between, Ballarè has been dressed in a succession of garish costumes from showgirl to a table with cakes on it. None of the other performers have, so I don’t think it’s me squeamishly singling him out and indulging in surrogate-offence-taking, but it is impossible to argue that he hasn’t being specifically cast in a particular way, and a way that is completely lacking any discernable agency. He doesn’t get to speak once, for example.  And the show isn't about him.  Like the rest of the cast, he's just a prop; a bit of moving scenery).

I’ve written before about my problems with the one-man show – and this is precisely a one-man show, albeit one with a half-assed, Jan Fabre knock-off of a supporting mise-en-scene thrown at it, which completely devalues its performers. Of one-person-shows: the ones that don’t work, don’t work because they are purely self-involved: they aggrandise the soloist at the expense of his audience. *Of course* it’s possible to make a one-person-show about a personal issue which is outward-looking. And it superficially feels as if that’s what’s been attempted here. But closer examination, at least for my money, reveals a very closed circuit in which the “lead” performer just craves attention, and slings a load of their phone-shot YouTube uploads together to get it, all the while talking, talking, talking in the the microphone, saying less and less with every word added, demeaning everyone else involved in the process.
Posted by Andrew Haydon at 13:51