For theatre fans with access to any sort of social media, it’s been impossible to ignore the fact that Rob Icke and Tom Scutt’s production of Anne Washburn’s 2012 play Mr Burns has become *the* play to argue about since it opened the Thursday before I saw it.

Briefly: in three acts, the play depicts a small group of people in post-apocalypse (and “post-electric” as the play’s subtitle smartly has it) America trying to remember, and then re-enact, an episode of a much-loved TV programme over the course of 80-odd years (a few weeks, seven years, 75 years).

Semi-annoyingly, Mark Lawson (next to whom I happened to be sat when I saw it, and who (rightly) admired my skills of rolling cigarettes in the dark) has already written the go-to rebuttal piece that was my initial reaction to the hoo haa (and made a rather good job of the obvious defence).

Lawson suggests: “As often happens to brilliantly original and provocative plays, Mr Burns has met critical hostility and mystification.” I reckon it’d be worth inserting the word “some” between “met” and “critical”. Of the reviews I’ve read, only Mark Shenton and Tim Walker’s reviews have expressed outright dislike*. Michael Billington reads the play perfectly well and makes plenty of intelligent points, as do Ian Shuttleworth and Michael Coveney while both also cheering loudly for it.

What’s most frustrating in the British reviews, is how hung up on the fact of the much-loved TV show being recreated after the apocalypse is The Simpsons they are. Michael Billington even fears: “If you stumbled into the theatre knowing nothing of The Simpsons, you’d be totally lost.” (which is true, albeit on much deeper level.) For what it’s worth, thanks to ‘Do The Bartman’ and the mass-marketing of T-shirts with the words “Aye carumba!” on them, I pretty much avoided the first decade or so of the show. Obviously, I’ve seen it. Maybe I’d even seen the apparently much-vaunted Cape Feare episode around which Mr Burns is centred (I’ve since watched it, albeit overdubbed in Russian). But actually, I think the vagueness of my knowledge made me appreciate the show more, or at least watch it as a piece of theatre. (Even if the visual gag of leaving a bunch of rakes lying around the stage eluded me.) But, Christ, there is Wikipedia now – a service which worryingly offers a more insightful analysis of this episode than any review does of the play. (I realise, in passing, that this is – unfairly – the exact reverse of my review of Goold’s American Psycho, in which I basically couldn’t engage with the show on it’s own terms precisely because of my own.)

Mr Burns is a fascinating script. Yes, at the level of conceit it’s just such a good idea that all that really matters is the execution. And the execution here is first rate. It’s interesting, too, that Washburn observes in her programme essay that the first act of the piece is essentially an edited verbatim transcript of a workshop held with some actors, with a bit of added apocalypse. This fact, for me, is one of the elements of the play that makes the script itself much more interesting than something just imagined. It's also interesting to me that the play is essentially as naturalistic a play as any by Ibsen. The actors are completely behind the fourth wall, required to make their characters move and behave convincingly, the world-of-the-play is entirely real to the characters, and there is no direct audience address. At least, until the third act, in which the actors are playing actors in a theatre performing *within the-world-of-the-play*. This in itself is an interesting dynamic, at once demanding our complicity and not needing it at all. In this, I think it might represent a really exciting direction in which naturalism can travel, while seeming “experimental” and exploratory.

In my opening paragraph, I suggested the production is Icke and Scutt’s. Traditionally, the designer get relegated to a thank you note, while the director is praised for pretty much the whole production. Obviously I have no real idea where the ideas came from, or how the collaboration works – although in the programme there’s a lovely photo of Icke, Scutt and the assistant director Whitney Mosery all grinning away in the rehearsal room – but the design here, especially of the final act, feels absolutely central to how we even begin to read this production. In fact, on that score, the music and staging of the final scene are also crucial.

There’s a beautiful moment at the start of Act III where three wooden chandeliers are lowered, lit, and raised over the stage as lighting for the spectacle to follow. Then there’s the design of the spectacle itself. The simple fact that how it looks is pretty much the entirety of the information we’re given about how far this culture has progressed (or regressed) since the apocalypse 82 years earlier. It’s the key to the production’s ideological take on what the script means, and indeed the outward manifestation of their optimism or pessimism about human ingenuity. Here, for me, it recalls a rough-hewn version of the traditional costumes of Balinese dance – perhaps a little nod to those who so impressed the young Antonin Artaud at the Paris Exposition. Perhaps that also says something about Western ideas of advanced cultures. But at the same time as being very funny – “Look at how wrong they’re getting The Simpsons!” “Hear how they incorporate Britney Spears’s ‘Toxic’ and Ricky Martin’s ‘Livin’ La Vida Loca’ into some sort of opera!” – it also seems to have a terrible beauty about it. Like, yes, I could imagine actually watching this *as art* and taking it seriously.

In this, as in much else about the play, it struck me that the piece is easily as much about theatre itself, as it is about culture, about apocalypses, and certainly maybe even more than it is about the flimsy distinctions between “high-” and “low-” cultures – Although one point that we could very easily take away from the play is – contra the dismissive and frightened reviewers’ point that The Simpsons can’t hold a candle to Homer (the Illiad one) – is that much of our culture might all be a terrible misunderstanding, and we now use deep, posh voices to read in hushed tones stuff that might very well have been considered populist, or even sub-par, at its inception.

The escalation of the performance as it goes from camp fire, to amateur troupe, to preposterous-from-the-outside operatic spectacle could also easily be argued either as a fair assessment of the history of theatre, or of story, or equally as a metaphor for the way that “high” art happens. I mean, Christ, in a way you could take it as a history of the way that the Delta blues of 1920s America had, over the course of 80 years, evolved into the grotesque, mad pageants of stadium rock.

I’m now wondering if the gaudiness of the final scene isn’t maybe partly intended by Scutt and Icke as a (perhaps slightly reactionary) suggestion that “isn’t it a shame that we can never retain the camp fire simplicity the the early days?” Maybe that’s an over-read too far, but it’s definitely a possible reading.

Michael Billington’s thesis that “a pattern is beginning to emerge at the Almeida under Rupert Goold; one that offers a bleakly apocalyptic vision of the future.” I’m not so sure that it is about apocalyptic versions of the future at all. After all, Icke and Macmillan’s 1984 is set in a reading group in 2050, when IngSoc have been overthrown. And, Bartlett’s Charles III, well, it’s set just around the corner; if the monarchy is an apocalypse then it’s one we’ve been living with for over 1,000 years. Mr Burns does fit neatly into a couple of other theses, though – my cheeky suggestion that Charles III was about “legacy” is echoed here. Rather than what remaining of us being love, Goold’s programming here suggests that what remains of us will be either overturned or misunderstood by the future, but that continual churn might just be what keeps life interesting and bearable. 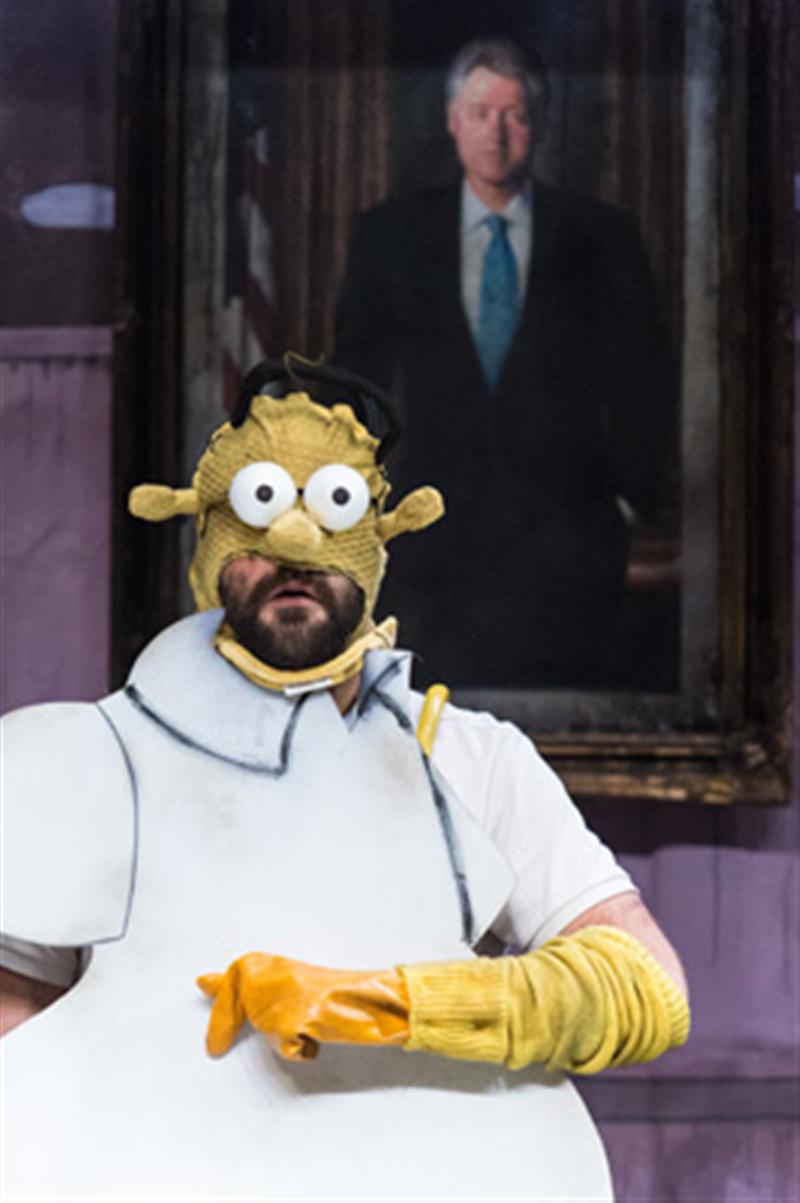 I also want theatre-trainspotter points for being the only person to point out that Tom Scutt also designed Anne Washburn’s UK debut production The Internationalist at the Gate directed by Natalie Abrahami in 2008.


*It’s worth noting that Tim Walker’s review reads like a series of exaggerations and outright lies. Claiming: “I have no idea at all what Anne Washburn’s play is supposed to be about, and I doubt very much that she has either. The programme stated that she works as an associate artist at an ‘investigative theatre group based in New York’...”, given that the programme includes a two-page essay by the author (from which he’s quoting directly there), and a tonne of other smartly curated material, explaining precisely that.
Posted by Andrew Haydon at 17:06