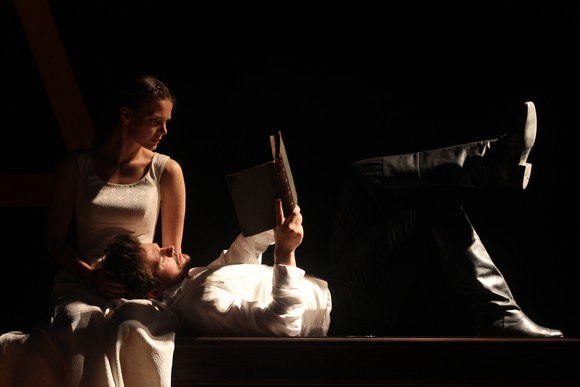 The first time I came across the Maly Theatre of St Petersburg was their The Winter’s Tale in 1999 under the direction of Declan Donnellan (and produced as Cheek by Jowl). I think the first (and only?) time I came across them with their own artistic director, Lev Dodin, was when his King Lear came to the Barbican in 2006 (my own review under the link, and, my God, don’t I wish I’d been a bit less of a breathtakingly pompous Little Englander back then).

Their current production is Friedrich Schiller’s Kabale und Liebe (Коварство и любовь) – literally Cabals and Love, usually translated into English as Love and Intrigue, last seen in Britain in 2011 at Michael Grandage’s Donmar as the hilarious-looking costume drama Luise Miller. Oddly, having not seen Grandage’s version (or checked out the photos of it beforehand), I did spend a lot of the first half of this production thinking this one probably wasn’t so very dissimilar. (Wrong.)

This is the first time I’ve ever actually seen K&L, despite there being numerous productions of it in rep in Deutschland at any given moment. And, though massively pared back in terms of both lines and number of characters, this feels like a pretty straight account of the main narrative, performed on a large rough wooden square stage-upon-a-stage, with a striking intersected cruciform on the black back wall (actually, *very* Cheek by Jowl).

And, for the first half/two thirds, it feels like, ‘Wow. This is a *really great play*’. As the title suggests, it’s all intrigue, love, villainy and heroism. And not unlike discovering a totally new Shakespeare play, or something.

The plot of K&L in a nutshell: son of duke (Ferdinand) is in love with Luisa Miller, the daughter of a poor musician. His father is an Evil Duke, and his aide, Wurm, wants Luisa for himself. Evil Duke for reasons not entirely clear in this version decides that his son should marry his own mistress, Lady Milford (a deposed English aristo he met in Hamburg) to clear the way for Wurm. Lady Milford duly goes off, and (I think) genuinely falls for Ferdinand too. Then Wurm makes Luisa sign a love letter to him (by this point the Duke has got both her parents locked up) so Ferdinand will finally leave her.

I guess the really big draw (or big turn-off, depending on your perspective) here is veteran director Lev Dodin – huge influence on the young Katie Mitchell, and here I think I could discern how and why. Leaving aside the bareness of the stage and the slightly (only very slightly) clunkiness of his decision to have characters leave or enter rooms/divide/demarcate the space by marching invisible corridors with sharp left or right turns, there is, at its core, a real passion for “emotional truthfulness”. This felt like some of the most unshowy yet wholly immersed, disciplined acting I’d watched in ages. There is, I suppose, the factor of the language barrier. Maybe in Russian they sounded mannered and unconvincing, but I think that’s something that one can see easily, even with a language barrier. At the same time, the production isn’t slavishly naturalistic (in the way I imagine the Grandage was). Lady Milford (boy, I bet Schiller didn’t anticipate the (apt) baggage *that* name would acquire) enters rooms seductively dancing on tables, sections of dialogue are played with actions contrary to the most *obvious* reading. There is a playfulness here, at the same time as a clear communication of what’s going on. And it’s all very enjoyable, really.

The interesting additional angle Dodin has brought to this version is the none-too-subtle hint that Evil Duke is basically a Putin figure. Because of this, I’m told the production has been closed down in Russia and (possibly) led to the theatre being vandalised. Which is frankly horrific. To cavil that as satire it doesn’t map very closely seems a bit pointless in the face of state repression operating on that level. There is a neat thing where, when the Duke gives orders, his voice is treated with the sort of static that makes it sound like he is speaking into an intercom. The costumes are refreshingly simple, though – no heavy-handed modern dress here, just simple hints at period elegance.

I imagine any German seeing this would be all consternation at the lack of concept, but I think British audiences would lap it all up. Until, that is, the final third. Where up until then, the pace has whipped along taking us with it, suddenly it all but stops. Tables are laid with white cloths, candles are brought in, wine decanters and flowers appear. And what was action becomes a rather long and tedious bit of wangling. Added to this, my God, Schiller, what the hell are you thinking here? The play is heading toward a tragedy along Romeo and Juliet lines, but rather than a crappy mail system, the only problem here is the virtuous Luisa’s refusal to break a promise that Wurm made her make that she would never divulge that she didn’t write the letter. And, in the other corner, Ferdinand’s willingness to *Actually Poison Her* for being unfaithful. So, she’s a bit of a prig, but, my God, in what way can we watch a play about someone prepared to kill their girlfriend for infidelity in the 21st century and not instantly conclude he’s just the worst person imaginable. And he’s still supposed to be a sympathetic character. I guess it’s basically Othello with poison, but with the added irritation that, unlike Desdemona, Luisa just keeps simpering on demonstrating how sodding virtuous she is. Bleugh. I lost rather a lot of sympathy for Mr Schiller’s worldview in that last half hour, I can tell you. Virtue is all well and good, but there’s a pretty warped moral code going on here.

Not really sure how to conclude. I should like to thank the photographer Ken Reynolds for the incredibly useful conversation over breakfast which elucidated particularly the political impact of this work in Russia. I recommend (as he did to me) taking an immediate interest in the work of John Freedman at the Moscow Times who is doing excellent work reporting on abuses of freedom of expression in Russia today.

Incidents: peculiar to watching the above production in this articular theatre – a pretty big Queen Elizabeth Hall-cum-lecture theatre type of affair – there was an amusing point where a massive electronic boom was heard and the surtitles just vanished for some time, then the always amusing spectacle of them being frantically scrolled through in order to find the right place. This ultimately involved a fair bit of hopping back and forth before the right place was found to the increasingly audible irritation of the assembled crowd. It was interesting just how behind the fourth wall the actors were for all of this.

This was also my first experience of a really big Romanian audience, and I discovered I really couldn’t read them at all. I got the impression they were every bit as restive as me for the last half hour, and yet, upon completion they gave rapturous applause well past even the customary durational event common to all European theatre.
Posted by Andrew Haydon at 11:58