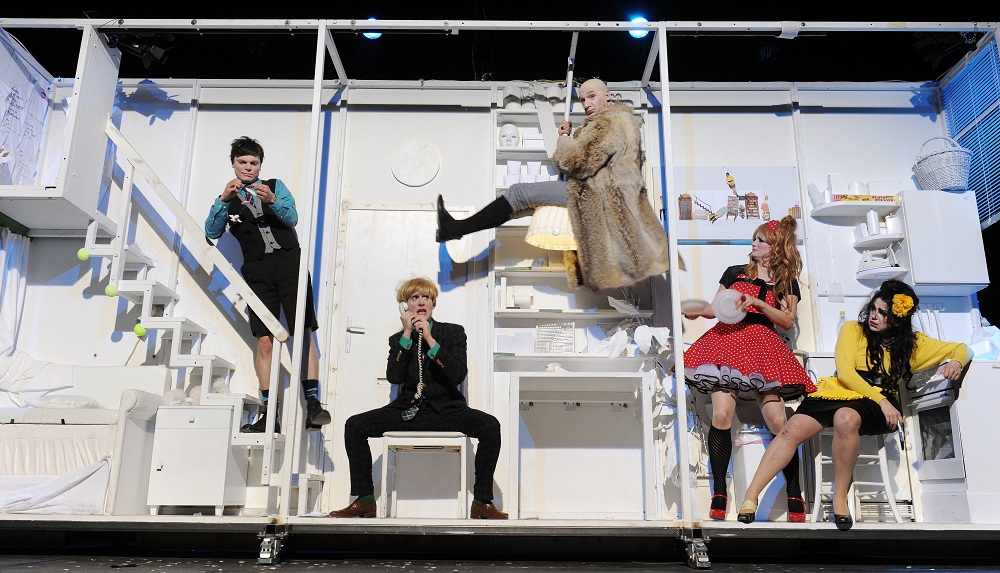 So, here we go, you’re going to like this one. Schauspielhaus Wien’s new production of Der Geizige (The Miser) by Molière is probably about as in-keeping with the traditions or demands of postdramatic theatre as one could wish to see. And I absolutely bloody loathed it.

I’m also unable to provide an entirely full account of the show as I left halfway through (more to do with health and logistics than endurance, though. I could easily have sat the thing out in other circumstances), so apologies for that. I will record, however, that by the time I went, more half the balcony had already cleared. Now, some of that was entirely down to sightline issues. Put politely, the balcony at Radu Stanca would be fine, provided the entire action of the play wasn’t thrust right to the front of the stage against a large metal frame which effectively limits the actors to 2D movement (i.e. they can go side to side, but there’s almost no depth). It’s worth adding that, for non-German-speakers, the appearance of the surtitles projected across an uneven surface about five metres to the left and right of the action, in a tiny font size, with very long lines moving very fast, and almost completely bleached out in 50% of the lighting states, may also be marginally irritating.

This Miser has been created by Bastian Kraft, whose Orlando at the Thalia Theater was one of my favourite things I saw in 2013. But this might as well be the work of a completely different director. One who has swallowed The Big Book of Copying René Pollesch without pausing to digest it. In true postdramatic style, Kraft has picked up Molière’s script, selected some central characters, relationships, and motifs, and then pretty much slung the rest into a shredder and, in place of what used to be the story of the play has assembled a selection of texts – mostly monologues – delivered largely in hysterical twittering by the garishly dressed cast.

And, to be honest, once I’d gotten used to it, if the sight-lines had been in any way things that included *seeing*, had there been surtitles that didn’t drive one to squinty distraction (funny how I’d have been fine if they hadn’t been there at all, it’s more the fact they are but you can’t read them that rankles), if I hadn’t had to go anyway, I think I *might* have warmed to it a bit more. Except I really *can’t* get my head into that Castorf/Pollesch school of hysterical tottering/running around and screaming lines. Well, sort of. I mean, it’s problematically misogynist enough when Castorf does it, but at least it was his idea and it means something. And with Pollesch it happens less and less now. So this just felt totally ersatz. And not a very good ersatz at that. Oh, one of the actresses had drawn on a Conchita Wurst beard, though, so full marks for Zeit(ish)geist-grabbing. (Although a burlesqued-up version of La Wurst ends up looking like the exact mid-point between Russell Brand and Amy Winehouse, which is a strange thing to realise watching some postmodern Molière.)

I quite wish I’d had a programme. Hearing/reading the assembled texts is one thing, but knowing what they are sometimes feels like it shouldn’t be withheld information. Or perhaps it absolutely should. I dunno. At the point where I left, Harpagon (the titular miser, if that concept retained any relevance whatsoever beyond the fact of the performer having apparently borrowed a wardrobe concept that might depict him, and having him occupy a similar relationship to some hoarded cash) was holding forth about his pleasure in sucking toothpaste back up into the tube, storing/preserving everything in the world, and about money being the perfect expression of the world. It was not unlike a mash-up of Jeffrey Skilling and James Lovelock, plus the toothpaste thing.

So, yes. I wish I’d seen the whole thing. I wish what I had “seen”, I’d actually been able to see properly. But hopefully this will at least reassure people that as soon as something is postdramatic, I don’t just roll over and gurgle with joy.
Posted by Andrew Haydon at 14:43