[report from Wednesday 14 May, plus a bit of a polemic] 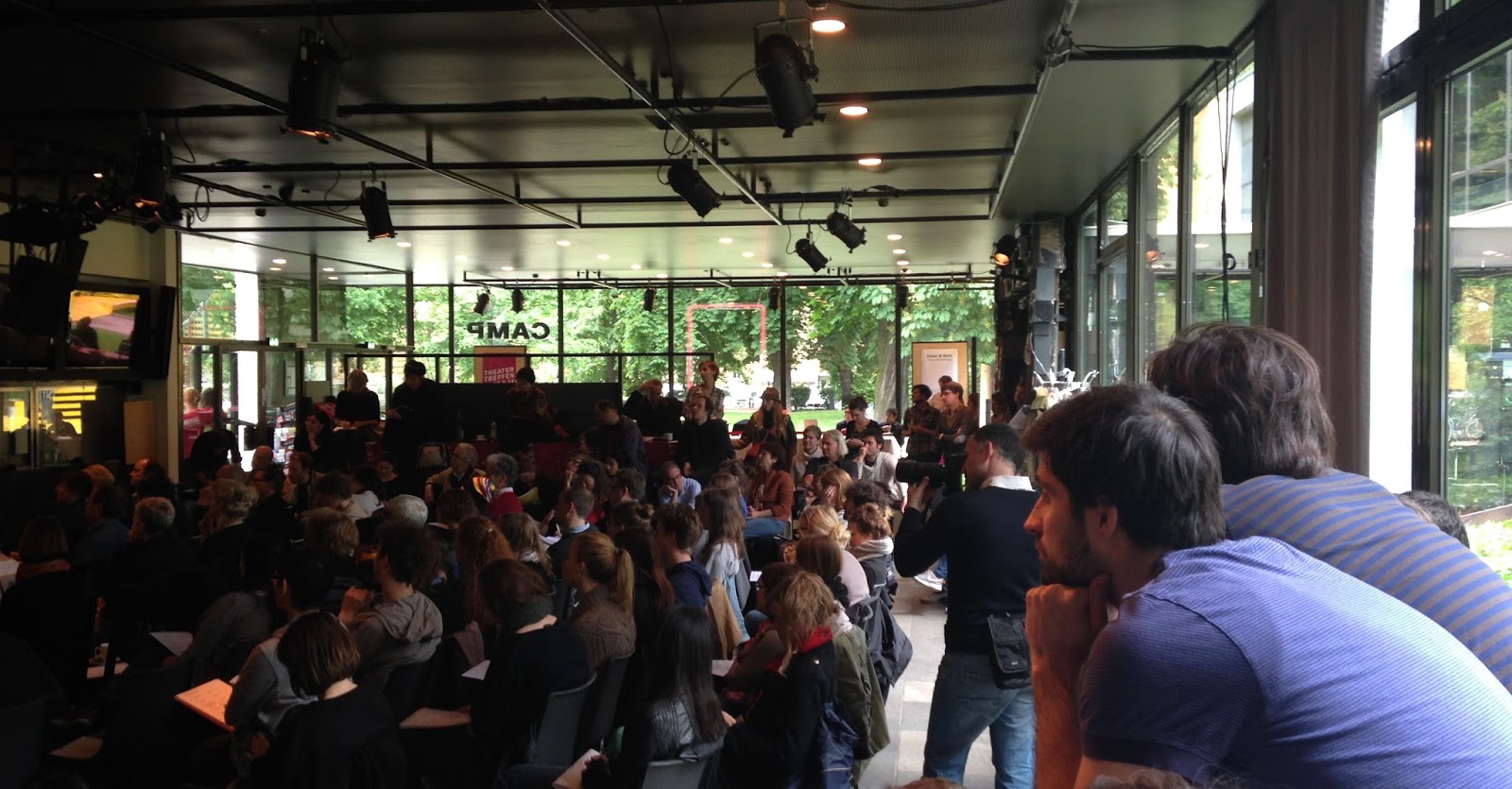 This visit to Deutschland/Berlin/Theatertreffen felt really different to the last time I was in the city at the same time as the festival, in 2011. Really different. Granted, my own personal circumstances were also totally different – I was living in Berlin rather than just hopping over for the festival, the Guardian really weren’t remotely interested in stuff about TT, much less allowing whole reviews of shows – but what stuck me this time round was firstly how many British theatremakers were over for it, and associated events. Last time (I think) it was literally just Simon Stephens. This time there were, among others, Simon, Chris Thorpe, Gemma Brockis, Yusra Warsama, Polly Findlay, Chloe Lamford, Sasha Milavic-Davies, Omar Elerian, Tom Hughes, Abigail Graham... (and others who I know less well...) You see the difference.

Another thing I found fascinating was the discussions held as part of the International Forum element of Theatertreffen. On the Wednesday, various speakers – Lütz Hübner, Omar Elerian, Chris Thorpe, Bastian Trost, and others – proposed various topics for discussion. Omar and, indirectly, Chris, both proposed forums discussing cultural diversity. Believe it or not, cultural diversity is only about three years old in Germany. I think I witnessed its official birth in the form of Ballhaus Naumstraße’s Verrucktes Blüt being selected for Theatertreffen‘11. The team behind that have now been swiftly moved to the Gorki Theater, and have been putting together a programme (not to mention an ensemble) which might actually reflect the make-up and concerns of contemporary Berlin/ers a good deal more than the majority of work by Dead White Males being staged (often by actually-Dead White Male directors) at, say, Deutsches Theater.

In this respect, it was quite heartening to go for dinner with a mixed British/German crowd on Tuesday evening and actually have the British being able to be quite, well, not condescending, but at least ahead on a topic. Germany might trump the crap out of us intellectually, but they have arguably done so off the back of completely ignoring audience development, education, or even interrogating the make-ups of their ensembles... As Wojtek Ziemilski remarked in Warzsawa two years ago, “Germany has a huge class – and I will call it a class – of people who are educated to a very high level and are already interested in theatre...”.

I won’t pretend that Britain has “got it right” yet. One only has to look at the new Act For Change campaign, my piece about women-in-theatre in January (and, boy, did I take my eyes off that ball. Might do some counting if I ever get a minute, but, my God, it requires a lot of admin), and etc. Britain is *by no means* a shining example of a fully-realised, culturally diverse, equal theatre. On the other hand, it does feel like a big issue in our thinking, and one which theatres are consciously trying to address. In Germany, however, even the concern is in its pre-infancy.

What was fascinating at the discussion convened by Omar at TT-IF was the extent to which the conversation still seemed to mirror the UK discussion. And – correspondingly – at times, seemed somewhat confused and short-circuited. Now, I should point out straight away before going further that I know I’m clearly in no position to talk insightfully about being part of any kind of marginalised group (other than maybe “people who go to theatre”). I’m white, male, middle-class, middle-aged and heterosexual. In theory, I could/should be running the country, but, y’know, I have a pretty nice life, and I hardly want for people of a similar background being represented both on-stage and off- in theatre. (Indeed, I’m so sodding *represented* that one might even imagine it’s one of the reasons I found theatre so easy to gravitate towards...)

However, all the above notwithstanding, it does feel like there needs to be a bit of critical clarity on these issues.

There was a lot of talk of “representation” on Wednesday, and of “telling the stories of people whose stories hadn’t been heard”. I think this needs a bit of separating-out. Not least, so that the Germans can save themselves ten years-worth of really terrible “issue dramas”.

When I was first discovering “German theatre” it felt like mainstream British stages were (at least occasionally, tokenistically – mostly it was still Shakespeare as usual) in the grip of the worst sort of broadly naturalistic, issue plays. Then, gradually, the BME ones (at least at the Royal Court) got replaced by issue-dramas exploring the “issue” of being white, privileged, and upper-middle class. Both sorts of drama sucked. My one defence (on a personal level) for never wanting to see another play about being (for example) a black drug-dealer on a London council estate is that I also never want to see another play about how hard it is to be a misunderstood white, upper-middle class teenager/middle-aged, middle-class, white woman/public schoolboy either.

An interesting, provocative question asked on Wednesday was “whose stories are honestly being blocked/not-told, here?” Really. Think about it. Do theatres not fall over themselves to put *all* those “stories” on stage already? And how good are they *as stories* anyway? Isn’t that a better criterion for judging what stories (if we have to keep having narrative at all) everyone gets to see? (The only group we could think of whose “stories weren’t being told” was Serb Nationalists. There are plenty of them writing plays. Where’s their representation on the British stage? I think “what stories are being told” is very carefully curated, and it doesn’t exclude BME/recent-immigrants half as much as those whose views are inimical to the left-liberal dis-census of the UK’s theatremakers. But who wants to have the “Where Are All The Right-Wing Plays” non-debate again?). If there was a movement which suggested that *formally* there were traditions being ignored, I might listen. But while it only feels like wrangling over whether there are different coloured variations on the British Issue Drama that might not yet have ever been written I might hang back a bit, at least until I thought they were going to be directed interestingly. Please? A Soap For Every Race *cannot* be the goal for a diverse UK theatre.

I also want to argue that this sort of “representation” is *very different* to “feeling represented” in a theatre culture. Something that appealed to me enormously when I was discovering German theatre was its apparent ease of representation. Here, I thought, is a perfect solution to so many of Britain’s ridiculous problems. I got the feeling that by binning “naturalism” and social issue dramas, we could have a theatre that was more democratic, much more representative, and infinitely more egalitarian. We could have old black women playing Hamlet and young, white, working-class actors playing Claudius (for example, as always). Performers could step out of the idiotic things that society expects them to be, and could instead *do acting*. Something of this spirit informed the best casting choices in Secret Theatre’s Streetcar... last year, I think. It’s not just about casting being “colour-blind” or “not-ableist”, (or classist) it’s about equality of opportunity. We need to stop thinking that a “black actor” *means* something *about* “Otherness”; if critics could stop reading a woman being cast as a man as some sort of comment on the “male” character’s masculinity/effeminacy... That sort of thing.

For that to be useful, though – for that process to also go further – I think what also has to change is the British concept of dramaturgy. I think it’s totally fine to still stage a play about a privileged white guy whose uncle has murdered his father, but it can’t be *about* that. (And, generally, it never is. Even here.) One of the reasons I found postdramatic regietheater so exciting was the way that it took texts of often deeply reactionary plays (of course reactionary, they’re the plays from the birth of German nationalism in the late 1700s, FFS) and re-made them as beautiful, or useful, or savage, or acute commentaries on contemporary Germany/Europe/wherever.

Put bluntly, the drama of social self-identification only serves to reinforce stereotypes and re-state worst-case-scenario social analyses. Narcissism as a reason to watch art doesn’t work. And, arguably, if you can easily recognise your “type” in the “art”, then it isn’t Art at all, it’s a self-help book or telly. (Both of which are fine, FTR, but are equally *not art*.)

If there are new analyses of society, of social questions, of theory, of whatever-it-is-that-we-need-art-to-talk-about, then we need *them*. Urgently. No matter what quarter they hail from. And we need a theatre that will stage them a radically as is possible. And, with a fair, proportionate, and with equal casting of the on- and off-stage roles. Because employment is the other side of “representation”. There are no excuses possible. Theatres should employ to either the local or national level of diversity (and similarly, I think, age, gender, disability, and etc.). Whichever is higher. No excuses. The only excuse there ever could be is because you don’t think “Blacks” or “Asians” or whoever are as good. And if you think that, then you have no business running a theatre, let alone making anyone watch your “art”.

I guess the dream would be for it to feel perfectly natural that the cast of King Charles III – a play and production I loved, lest we forget – didn’t feel like an inadvertant exercise in reproducing precisely the sorts of privileges that the play seeks to question.  Then I think we'd really be getting somewhere.

Since we discussed it back in January, I thought I'd let you know that I've kept up the monthly count of how many shows written by women are put on in London, usually posting the list as close to the first day of the month - you can find them all here: http://thebookofmaev.wordpress.com/tag/workbywomen/

After six months, it looks as though the total generally hovers somewhere between 10-15%. I have some other thoughts about it, but I want to wait till I have a full year's worth of data before making any statements I might regret (though still, where oh where is my Aphra Behn revival?)

I think part of the difficulty in becoming freer with casting in the UK is the literalism that comes from decades of naturalism (inc. telly). At a Q&A last night for a show I'm doing about foreign correspondents, a young woman all but accused us of having no integrity because none of us had been in a war zone. And this in a sung-through show. 'Acting bad, Performing good.'