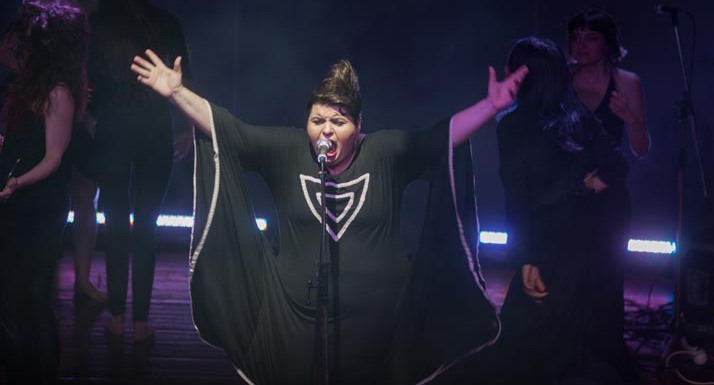 In New Performing Arts Practices in Eastern Europe (of which, lots more another time), Iulia Popovici describes director Radu Afrim as “a lone voice in Romanian theatre for the past 15 years.” And, along with Silviu Purcărete, one of “the last two remaining representatives of East European auteur-theatre in Romania.” That gives you a useful bit of context, as does looking on YouTube at trailers for remarkable-looking productions of, for instance, Three Sisters or Cosmonaut’s Last Message...

As it happens, this is only tangentially useful context for understanding Hai Iu Iu Nu... (henceforth Hai...). The subtitle of the piece is “Maria Tănase Remix”. Knowing literally nothing about Romanian culture, I wondered if this meant a piece directed by Afrim had been re-directed by another director. Nope. Maria Tănase (1913 – 1963) is Romania’s biggest folk singer star. Her songs are all about “Sex, even with prostitutes. Drinking. Women who drink...” and Hai... is quite literally a concert of cover versions of her songs, delivered by a large cast of (mostly) women, in a variety of musical styles – mostly erring toward the hardcore, jarring, discordant, and, dare-I-say-it, goth-y. And it’s pretty terrific.

I happen to be staying in the same hotel as Radu, so I just asked him about it at breakfast (professionalism, yo), mostly because I wanted to know if there was any specific story being told across the piece. Apparently not as such, but even so, watching blind (or, rather, without surtitles) last night, it did feel like thought and dramaturgy had gone into the order of the pieces, the contrasts between one style and the next. The different sorts of presentation. Ultimately, it didn’t actually feel any more or less problematically episodic than, say, Solitaritate or Do Damaszku. Indeed, following on from things like Das Schottenstück. Konzert für Macbeth, you could have told me it was a producion of The Orestia and I’d have happily gone along with it (like the useful idiot for postdramatic theatre that I am).

The style of the thing is, as I’ve implied, diverse. Lacking a track-listing (or CD copy of the music), and having to go only from memory (even if I normally took notes, it would have been pretty impossible last night), this is probably going to be a bit impressionistic and flawed. Also, because it’s music, one’s field of reference gets weirdly more specific/specialised/personal than when writing about the field of theatre, which, at least in Britain, has, it feels, a lot more common points of reference. The opening song sounded like a soused, raw, husky Romanian Patti Smith. The next like a cross between Siouxsie and the Banshees doing techno mixed with Le Mystere des voix Bulgares (doubtless several Romanians just winced at me comparing their national folk singer to a Bulgarian choir – all I can do is apologise and say, thanks to 4AD, they happen to be the first (and consequently most enduring) version of this southern, eastern European vocal sound, where Europe starts to meet “the middle-east” – doubtless due in part to the Ottoman Empire’s reach). Elsewhere, I was reminded of something the British goth band Play Dead coving Ibiza house music. There’s also a smattering of “authentic” folk played on fiddle and accordion, and even a pastiche Eurovision number. All in all – despite some *really frustrating songs* which feel like they never get to *the good bit* (musically: the resolution of the motifs, I guess) – this was all terrific fun. It’s also worth noting that the musician, Vlaicu Golcea (lots of free downloads on his site under the link), responsible for these new versions, has created work that is properly textured and intense, there are nods to really out-there power electronics pioneers and an attention to detail that recalls someone like Nick Gill.

What felt more significant about the staging, however, was something that I might try to describe as “the overt feminism” of it. Here were women of every age, size and shape, belting out pop music in a way that feels like it’s been banned in Britain since about 1989. You know those old episodes of Top of the Pops with people like Alison Moyet or even T’Pau? That sort of thing. It’s weird. I don’t think I consciously noticed it happening, but pop music these days seems to be made exclusively as a side project by people whose main job is going to the gym and polishing themselves the whole time. It’s a bit weird, right? So, yeah, apart from anything else, it was properly great to see a cast of women assembled more diverse (and certainly more numerous) than anything I’ve ever seen on a British stage outside performances of The Vagina Monolgues. (Oh, except, maybe imagine a version of Little Bulb with about four times as many people...)

So, yes. For something that’s nominally “only” a concert/gig (and one put together “as a workshop” – kind of a very realised scratch?), it felt like there was a whole lot of really intelligent and meaningful political decisions being taken at every turn here. I’m pretty envious of Romania’s theatre culture right now. (Although, it’s worth noting that this had been programmed into absolutely the wrong space. Sala Thalia (where I also saw Ping Pang Qiu) is a big barn with seating. This wanted to be at the Brixton Academy, or its nearest Sibiu equivalent...)

[below, one of the songs. For full effect, turn up to the loudest volume you’re comfortable with, then double it. And listen in a dark room with a strobe light...]