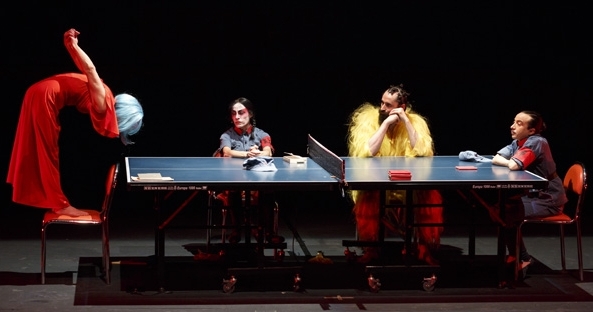 Thanks first to eccentric programming, and then to exhaustion, I didn’t see as much of Ping Pang Qiu as I would have liked. (I’d been booked in for Solitaritate at six and PPQ at eight. Solitaritate is 2hrs15. You see the problem. Although. I should add, this festival has a rather enjoyably relaxed attitude to both latecomers and to the concept of “sold out” – which only seems to mean: “wait until ticket holders have gone in and claimed their seats, then sit on the stairs, stand in exits, block fire escapes, disregard health and safety in a way UKIP could only dream of...”).

I arrived at the venue slightly late, hot, discombobulated and entered the large, music hall-style auditorium to be greeted with the sight of four people standing on stage, bathed in red light, an aria from Monteverdi’s L’Orfeo (I’m pretty sure. It might have been Gluck’s Orfeo ed Euridice), two were dressed as soldiers of China’s Red Army, one woman was dressed in a silky red dressing-gown and blue bobbed wig, and the last guy, quite a big bloke, was basically dressed in a massive yellow furry yeti costume with the head on. Or Big Bird. Or the Honey Monster. They were fanning themselves with copies of Mao’s Little Red Book. On the right of the stage, something papery was on fire atop a small mound of sand.

When the aria finished, they all went and sat round a big table. The woman in the red dressing gown began to speak. This first section seemed like a session of Maoist intellectual training – remarkably similar, in fact, to the way that the characters in Godard’s La Chinoise talk to each other. Indeed, this first (for me) section of dialogue, reminded me of that film very much. The sections of the Little Red Book are read out. It’s all pretty fascinating, but equally pretty free-floating and apparently anchored to nothing. I was also too far back to see the extent to which make up had been used to affect a “Chinese” appearance. Some, I think. I am pretty sure none of the performers were actually Chinese. Hmm again.

From this, Ping Pang Qiu, what I saw of it, is essentially became a monologue directed at the other three figures round the table. With Angelica Liddell – the lady in the red dressing-gown and blue wig – offering a series of her thoughts and reflections on China. There was, for example, an interesting bit where she read out an email from a Chinese friend, who was reflecting on the content of her show that she’d been explaining. The most striking thing he said – relating to her telling him about the Nazis burning painting by Klimt – was about the Cultural Revolution. “China no longer exists,” he said, “So much was destroyed or lost that China is no longer China”. Given British theatre’s current preoccupation with China, this felt like a fascinating fresh perspective. I found myself wishing that anyone had once articulated anything so interesting in Chimerica (a play which seemed to manage to evoke literally no sense of history – or rather, no history prior to June 5th, 1989).

Actually, the “tank man” also featured in this section. What was most interesting here is that, in contrast to Chimerica and, even more so, There Has Possibly Been An Incident, PPQ uses the video footage rather than static photographs. This has a fascinating effect. Rather than being about a moment of silence and stillness, Liddell describes the incident in terms of a waltz with a tank. The moment is given back its kineticism (if that’s a word):

To be honest, after last year, when the stillness of the photographic image seemed to saturate our recollections, seeing the inelegant bargaining, the messiness, the bit where he even jumps onto the tank feels like both a shock and a release from the solemnity that had begun to settle around it (although, this piece was also touring last year, so it’s just a matter of coincidence that this is where and when I saw it: five days after the 25th anniversary).

The wider reflections on China range from the perceptive to the borderline Orientalist, often swerving violently between the two states in the course of a couple of sentences. It’s hard to tell – the piece is written and performed in Spanish – how much self-awareness there is around this (my guess is: “some”), and/or whether self-awareness of one’s Orientalising alone is enough to mitigate it. I suspect that in a different context, or perhaps if one were a native Spanish speaker, this concern could be far more easily allayed. I also wonder if the space in which the piece found itself here – a raised stage a the end of a very long dark hall – may have slightly done for its playfulness and intensity, rendering it instead a somewhat oblique and solemn spectacle, even while it committed more and more bonkers acts to memory.

After a long while the piece switched back into another snatch of Monteverdi and, exhausted, I slunk out, missing apparently, a food fight and a dog! There was a sense, that far from the stage, but still glued to the surtitles, that I might have been better off just reading it, given the (mostly) static display of four tiny figures sat round a table a long way away...
Posted by Andrew Haydon at 12:57