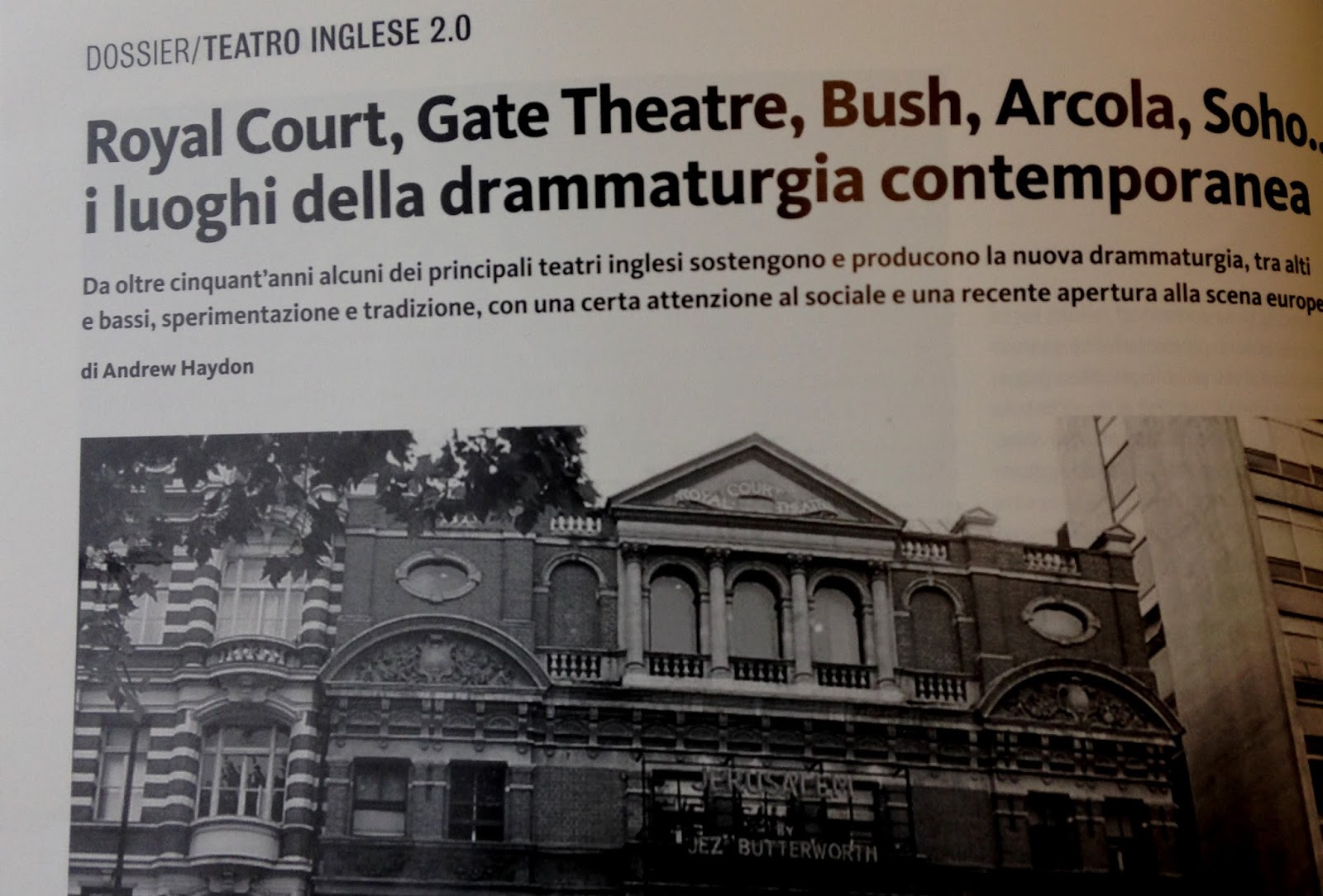 [Ok, so I got a brief to write two pieces for the Italian theatre magazine Hystrio about new plays in Britain divided into the slightly arbitrary “buildings” and “festivals” (and, I think, only up until '10, or something). I tried to follow the brief as closely as possible, with the result that both pieces feel a bit odd and counter-intuitive. I’m still not really sure what I think of them, but here they are. I think there might be a bit of original thinking forced out by the strange parameters...]

If Britain has a reputation for anything theatrical, then it tends to be widely believed that it is primarily for its writers. Perhaps it’s down to Shakespeare, and the enormous shadow that he casts down the ages; perhaps it’s something to do with the sheer copiousness of the English language – generally having at least five words for any one thing – which lends itself particularly to delight in the written and spoken word. Perhaps it’s even something to do with our national temperament – we’re traditionally a bit suspicious of the grand director figures, and we’re perhaps naturally conservative; shying away from the overt schemes and ideologies of a truly radical or political theatre such as those of Meyerhold or Brecht. So, instead, rather than having a national theatre culture predicated on constant reinterpretation of the classics, such as in Germany, it often feels – in spite of the amount of Shakespeare, Ibsen and Chekhov we do see re-staged here – that British theatre is a theatre led and defined in the minds of many by its new plays.

Interestingly, this perception seems to be a relatively recent one. The term “New Writing” (as opposed to the uncapitalised version, which is merely a factual description rather than a genre) only really seemed to become *a thing* in the mid-nineties. That this has even become the accepted theatrical orthodoxy seems slightly strange. After all, theatres like the Royal Court and the Bush had been focussed largely on the production of new plays since their foundation in 1956 and 1970 respectively. However, if you read an orthodox history of the Eighties in British theatre, they paint a picture where the new writing scene is largely moribund. Of course new plays came out: the careers of playwrights like Howard Barker, Timberlake Wertenbaker, Sarah Daniels and Doug Lucie wax and wane almost in their entirety over those ten years. Older writers established in the fifties, sixties and seventies – Harold Pinter, David Hare, Howard Brenton, for example – carried on knocking out solid pieces of work. And yet the big narrative of the decade is the rise and rise of the blockbuster musical. Thanks to Andrew Lloyd-Webber, and the bank-bursting RSC production of Les Miserables, the overall impression of British Theatre in the Eighties is not one defined by its new writing.

This all changes in the nineties. Stephen Daldry comes to the Royal Court in 1995. For his first season he is interested in reviving Irish plays and making non-naturalistic physical theatre. Then in January 1995, a small production of a first play by a 23-year-old graduate of the Birmingham Playwrighting M.A. course seems to change all that overnight. It is now more-or-less impossible to overstate the reputation of Sarah Kane’s Blasted in recent theatre history. Usually it is joined by Mark Ravenhill’s début for Out of Joint, Shopping and Fucking. Other plays mentioned in the same breath include Jez Butterworth’s Mojo, early plays by Anthony Neilson like The Censor, and even sometimes Patrick Marber’s Dealer’s Choice and Closer. The critic Aleks Sierz quickly capitalised on the prevalence of the phrase “In-Yer-Face” in Nineties youth culture and “In-Yer-Face Theatre” was born.

Much has been written about the extent to which this label is/was a misnomer; what a mistake it was to bunch all these writers with their different styles and desires together; and how none of them really thought of their plays as being in anyone’s face. But the superficial appearance of a new violence, anger and sexual transgression in the plays, coupled with the fact that it was new writing rather than blockbuster musicals making the splash, seemed to ensure that the label stuck. Historically, this has caused a few problems. Firstly, after a couple of years of sex and violence, a few of the critics began to seriously cavil that there wasn’t enough variety. And, of course, even an invented “movement” could only be expected to last for so long.

For better of worse, the recent history of “New Writing” in Britain is more or less synonymous with the history of the Royal Court, supplemented perhaps by the Bush, and then by the commissions of new plays at larger subsidised buildings such as the National Theatre and the RSC’s Stratford base. It is interesting to note, for example, that somewhere like the National Theatre had in truth an output of around 50% new plays during the period under discussion. However, in the main these somehow resisted categorisation as “New Writing”. The reasons for this largely to do with a perception that they were either a bit on the stodgy, middle-class side (things like Alan Bennett’s The History Boys), or else were such blockbuster hits (War Horse, or Richard Bean’s total re-write of Goldoni’s [ITALIAN HERE]; One Man Two Guvnors) that everyone seemed to forget that they were also a product of someone having written the thing at some (recent) point, thanks often to a production apparently indistinguishable from the text. Places like the Gate theatre (and to an extent the Young Vic and similarly the Arcola Theatre) also sit outside the “British” theatre ecology, serving as they mostly do, as places where the texts of plays they produce come largely (or in the case of the Gate exclusively) from abroad – granted this gives work to a few British playwrights creating “versions” of the original texts in English, but these are seldom original works of adaptation – if there’s adapting to be done, this might more usually be done by the directors here, since the Young Vic especially seems to function as an unofficial home for British auteur-ism. Other classic new writing venues like the Bush and Soho Theatre, however, pretty much existed under the shadow of the Royal Court, and so to an extent were influenced by the work the Court was putting on, and at times it felt almost restricted to using writers which it had discovered. When the Bush discovered other writers it wasn’t unusual for them to quickly be co-opted by the Court. Similar is true of the smaller Finborough theatre, which, largely unfunded and generally unable to pay writers, could discover many, but scarcely support their ongoing careers.

As such, it is the departure of Stephen Daldry and the arrival of Ian Rickson at the turn of the millennia which seems to me to alter the future direction of New Writing in Britain. Added to this, I would argue that two other significant developments are crucial. The first is a vast increase of funding for theatre from the young New Labour administration, much of which was piled into investing in young writers’ schemes and the creation of literary departments. The second, perhaps smaller, but I would say symbolically more crucial, was the appointment of the young playwright Simon Stephens to the position of writer-in-residence at the Royal Court and his leading of their recently created young writers’ programme.

Stephens’s early work, along with that of his contemporaries David Eldridge and Leo Butler, perhaps typifies the change in direction at the Royal Court: going from violent and formally speculative work to Stephens’s initial works offering carefully observed, more gentle, nuanced naturalism – influenced by the German playwright Franz Xavier Kroetz and his older peer Robert Holman. That Stephens is enormously personable perhaps meant that this style became more prevalent amongst many of his protégées than may have otherwise been the case.

A less welcome development in the New Writing culture throughout the early 2000s was the tendency to try to use theatre as a means of social inclusion. A fine goal, of course, but one which was frequently put into practice with startling ineptitude, with a variety of plays being commissioned by members of minority groups which effectively reinforced negative stereotypes, with naturalistic plays often unwittingly dramatising the worst prejudices of Britain’s racist, anti-immigrant, reactionary tabloid press.

The development which began to disrupt this direction was the increasing two-way traffic between Britain and the European mainland, particularly Germany. This seems to me again to have been spearheaded by Simon Stephens. In 2005 he went over to Switzerland to see a new production of his play Herons directed by Sebastian Nübling. He talks about how he had been “warned” by colleagues that the Germans would “ruin” his play. Instead, in contrast with elderly authors like David Hare, who tells a similar story about seeing a German production of one of his plays, albeit with some displeasure, in his piece Berlin, Stephens adored the production, marking the start of an ongoing love-affair with German theatre culture, and creative partnership with Nübling culminating with the cultural explosion that was Three Kingdoms in 2012.

Indeed, “German” seemed to become a shorthand around which those bored by the direction in which domestic naturalistic playwriting and production had gone. Under Ian Rickson’s successor at the Royal Court, Dominic Cooke, after what seemed like an inspired opening salvo against the dominance of naturalistic plays about “lower-class misery”, Cooke declared an intention, inspired by Shakespeare, to commission plays looking at those in power. This quickly declined into a series of kitchen sink dramas, albeit sinks in much more expensively decorated kitchens. The fact that these middle-class dramas attracted a large wealthy audience and increasingly transferred to the West End made the entire movement seem even more loathsome – and, after the Conservative coalition grabbed power in 2010, untenable.

Suddenly again there was a real desire for angry, urgent, left-wing political theatre – and one which now entirely mistrusted the naturalism of the 2000s, looking instead toward Deutsch regietheater as a possible further way to distance itself from a school of new writing that had come to symbolise Tory complacency and Conservatism.
Posted by Andrew Haydon at 00:37