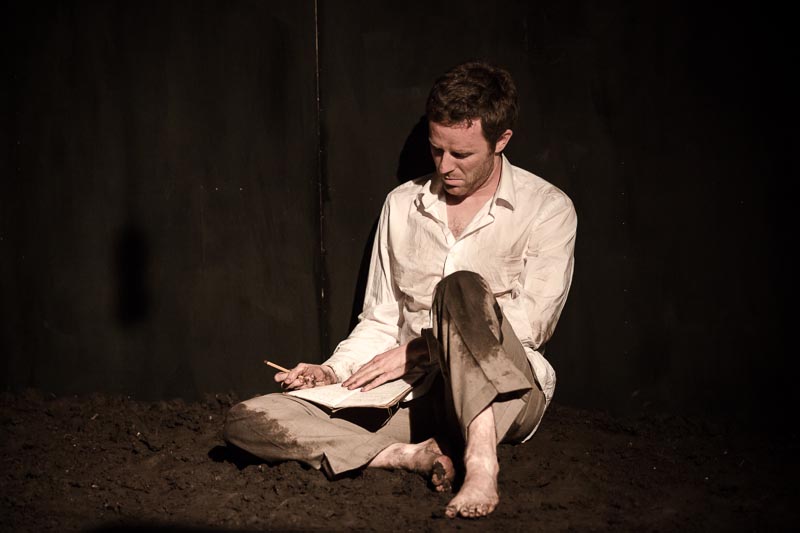 “There is no explanation for Auschwitz.” So opens this monologue adapted from the novel Kaddish for an Unborn Child by the Hungarian writer Imre Kertész. It’s been directed and produced by Barbara Lanciers and is performed by the improbably youthful-looking Jake Goodman. And it’s from America. Theatrically speaking, it’s basically Sea Wall with added Holocaust.

It’s also only 45 minutes long, for which, in the context of this Festival, tiredness, and yesterday’s three-show day, I was immensely grateful. In the context of, oh, adapting the novel for stage, and generating a full, engrossing, comprehensive theatrical experience, it seemed a bit slight. I’ve kind of got used to two hours something, no interval, being *how long a piece of theatre is* here. So 45 minutes seemed almost irresponsible, especially given the weight of the topics.

Performed against a couple of metal flats at right angles to each other, and over-hung with a beam of lightbulbs, Kaddish is a perfectly serviceable-looking piece of work. Goodman is charming enough, although his delivery perhaps tends toward a fondness for one particular cadence, with which he relates everything from his divorce to the narrator’s experience of Auschwitz. Important words are underlined with the voice going a semi-tone up. He wears a “timeless” suit and white shirt. And doesn’t look like he’s suffered a day in his life. I guess, being theatre, wanting verisimilitude is a bit dim, but I don’t think wanting maybe a bit more *acting* – or maybe it’s *less* *acting* that I wanted – doesn’t seem so much to ask.

In short, I think I’d really like to read the book, but I wasn’t remotely convinced that this adaptation of it for the stage was especially good. That said, it was playing in pretty hostile conditions: 4.00pm on a hot day in a space that couldn’t achieve anything like a full black-out, and sounded it like had mostly been constructed from squeaks. Like, seriously, you couldn’t shift weight in a single chair there without it sounding like you were flapping an enormous barn door back and forth. And it wasn’t comfortable enough not to, so in a lot of ways, I still don’t think I’ve really seen the piece enough to properly assess it. On the other hand, given that it’s an adaptation of a novel performed on an indifferent set, by a performer who is merely charming and capable of speech, doesn’t seem like enough of a draw for a return viewing. At which juncture, thinking seriously about the subject matter – about as serious and heavy as it’s possible to get – seems inappropriate.
Posted by Andrew Haydon at 11:01