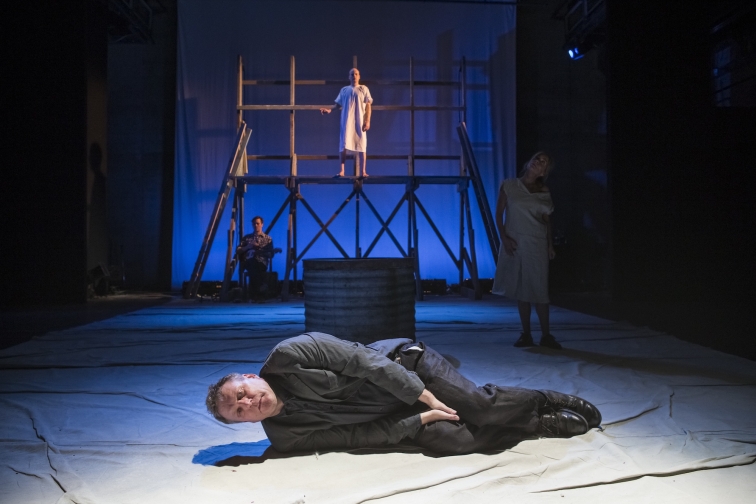 You know that thing where you see a show, and there’s probably nothing wrong with it at all, but you think: “See every decision they’ve made there? I’d have made a different one.”? That.

Chorale, subtitled “A Sam Shepard Roadshow” is a co-production between ATC (The Golden Dragon, The Events), and Presence Theatre, Simon Usher’s company with the aim of “redressing the problem of the ever-shrinking repetoire in the UK’s mainstream theatres.”

There are a possible four things you can see as part of the Sam Shepard Roadshow: this programme of The Holy Ghostly and The War in Heaven, or another featuring The Animal (You), a devised piece made from Shepard’s works, and Savage/Love, a film about Shepard and Joseph Chaikin, with whom Shepard wrote The War in Heaven. I wonder if the pairing of a devised show with proper ownership over the material and a film is a slightly better bet.

The Holy Ghostly is a short (50 minutes) piece in which a father confronts his son over a campfire, only for it to turn out that the father is already dead. It’s an entertaining piece here, but I can’t help feeling in a different space – the Bussey building’s performance space is like a smaller version of the old Arcola: *very* low ceiling, pillars spoiling the sightlines bloody everywhere, etc. It’s also configured in that very unhelpful shallow, wide stage, shallow, wide audience configuration. They should bite the bullet and have it “Portrait” rather than landscape. Audience right to the ceiling, but a really excitingly deep stage in a studio space. Anyway... This is also a touring production so it might not be seen to its best advantage in this space. Given the amount of shouting that the actors have been asked to do (or done themselves and not been told to stop), you’d hope that this production started life in a *much* bigger space. Here it just looks like volume has been misunderstood as intensity, when in fact it makes it much harder to hear what’s actually being said. But shouting is one of my (many) pet hates, so I should maybe shut up. It’s interesting; theoretically the first act of Mr Burns is *much* darker (in the literal sense of difficult to see due to lack of light), in the event, The Holy Ghostly, despite twice as many visible light sources, feels like you’re always missing the crucial expression or moment. It’s also like Mr Burns in that it’s a play where the text does all the weirdness and the acting of it seems to want to be played as entirely truthful. Here, I’m not sure the company completely make that decision work.

More promising is War in Heaven, in which an angel talks to a bloke who might be dying or dead or something. This feels much more like it comes from a similar lineage to Strindberg’s Road To Damascus or even Hamletmaschine. Usher’s staging, likewise, seems to move away from the strictly literal; but it doesn’t feel like he’s quite worked out what to do instead, or where to put everyone. And there’s still quite a bit of shouting. It’s a shame, as Jack Tarlton is a great performer (Golden Dragon, the NT’s Morning til Midnight) and I imagine the other two actors are also great in different circumstances, but here it feels like a slightly misfiring shout-through (Also, if you’re going to have a freeze frame final imagine, don’t do it in front of a data projector which is still casting a massive glow over the back wall of the stage even in “black-screen”, the blackout doesn’t work and it looks silly).

Urg. I really wish I’d liked it more. What I could hear of the text through the shouting (is it just me who finds it hard to concentrate on meaning when people bellow lines?) seemed really interesting, and I get the impression that even just having the piece in a different space would radically alter one’s experience of it. That said, yesterday was the last date in the Bussey Building, and the next is in Enfield (next Friday, other programme), so that might be really great. In the mean-time, I can only call it as I see it, and for me it didn’t quite gel.

[edit: oh, I’ve just looked for an image for the top of the piece (which you’ll have seen as you came in. World of difference. That pic is from the Traverse and looks about as unlike what I’ve described above as it’s possible to imagine, so, yeah, let’s chalk this up to transfer difficulties and say no more about it)]
Posted by Andrew Haydon at 11:48