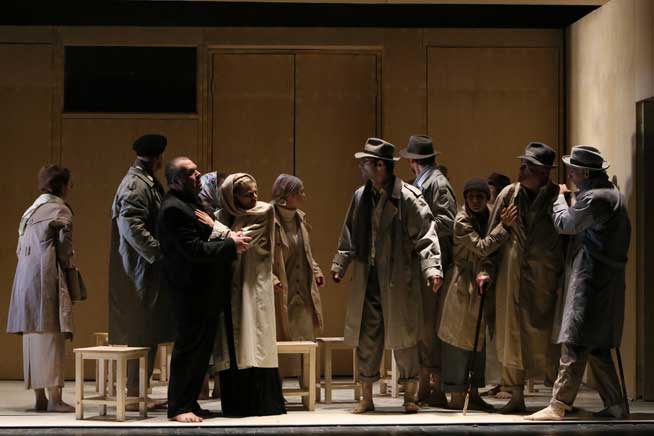 Thanks to a couple of ecstatic reviews of his Faust (which I saw last Saturday here in Sibiu, review forthcoming) when it came to the Edinburgh International Festival back in 2009, Silviu Purcărete has something of an inflated reputation (especially among those who didn’t see it) in Britain, which, curiously, the subsequent transfer of his Gulliver’s Travels (also playing in Sibiu yesterday) did nothing to really dent.

Here in Romania, the première of a new Purcărete is plainly still a *really* big deal – at least, if the police on the door of the theatre and the scrum to even get in is anything to go by. And, well, a venerable iconoclast’s take on the Oedipus plays has got to be worth five minutes of jostling on anyone’s part, right?  And, to be honest, I was excited to see it, too.

I guess the first most striking thing about the new production is the set. And what’s striking about it, for a director generally so associated with visual spectacle, is how small and unspectacular it is. It’s basically a bare, wooden/MDF, little shoe-boxy room, sat facing outward in the middle of the Radu Stanca’s already small-ish stage (think Cottesloe in end-on configuration).

(Once the audience have settled down – the usual fifteen minutes or so after the advertised start time...) Into this small room shuffles a bloodied figure, his back to us, as he gropes his way round the walls, trying to make sense of the room he’s entered. He is followed by two young women, modestly dressed in clothes that could date from any time after about 1940 right up to now: plain macs, hair plaited and tied up. The room is visible only from the waist up. They sit their father down on a chair – back still toward the audience – and begin to wash the blood from his matted hair and dusty torso. This is Colonus, we learn.

And, briefly, I’m excited to be seeing not Oedipus Rex (again), but the much less frequently performed sequel. Then there’s a blackout and we’re in a flashback. A flash-right-back to, yup, the beginning of Oedipus Rex.

Purcărete’s vision of the play is pretty damn straight-forward. There’s a mid-sized crowd of citizens – maybe nine or ten? – they’re dressed a bit 1940s, but modernly so (basically: costume a play as if it were the 1940s, but you have to buy everything in Gap, kinda thing). Oedipus is wearing a black suit. Jocasta is wearing a see-thru tight black lace number over flesh-coloured underwear. They keep opening bottles of Prosecco. The waist-high wall at the front of the stage is whizzed back into the wings, revealing an intriguing clay-covered, faceless, bandaged figure. Tiresias, when discovered in the crowd, also has his face bandaged, under his fedora.

Do I need to tell you the plot? After consulting a bunch of oracles, it gradually dawns on Oedipus, King of Thebes, that everything any of them have ever told him or a member of his family is bang on, and he has indeed killed his father and married his mother. She goes mad and kills herself. He stabs out his eyes with her broaches (off stage. We are told about it by a messenger, as per Sophocles. Thank God). He returns to the room/stage dripping with blood and smears his rotund body around the walls.

This is all whipped through in about an hour. It reminds me, at least in terms of narrative drive and concision, of Gareth Jandrell’s version, Thebes, seen in London in January.

So, happily, we do get to Colonus, or to Seven Against Thebes, or to somewhere beyond Rex, anyway.

I should note that the performances are a strange blend of natural, theatrical and functional. There’s no time wasted on “psychological” acting, per se. The lines are spoken emphatically, in a manner suitable to the predominant emotion of that the speaker is experiencing – apart, that is, for the odd bit of spooky-voice-acting they do, either when recounting the words of an oracle, or relating the words of a God.

Once in Colonus, the set also picks up. The back wall – which has hitherto just moved back once and forward again – is now dismantled and we’re in a room with vast French windows looking out onto a (brilliantly executed) video projection of a field and behind it a forest in the wind. In “the middle of the field” (on-stage) is a table, around which Oedipus’s sons and friends – the men dressed in black tie, and three female friends dressed in sopping wet white dresses, which, yeah, have gone pretty see-thru. It perfectly conjures a decadent party with the patriarchy (although it also rather adds to the ledger wherein is recorded the countless unnecessary naked/semi-naked/topless women in Purcărete’s productions (tonnes in Faust), ranged against all of one fat bloke with his shirt off, which some people might see as a wee bit sexist (compare with Olivier Frljic’s four or five full frontally nude men against two women wearing bras)). In a slightly more Katie Mitchell moment, though, there’s also a woman in a long black hooded dress, wearing one of those white aerosol-protection face masks that cover the nose and mouth, wandering round this garden spraying everyone with a fine mist of water. There’s also a guy sat in the chair at the end with a cardboard box on his head. The guy with the box on his head suddenly stands up and shoots everyone with what sounds, for all the world, like a spud gun.

Oedipus, Antigone and (is the other daughter Ismene?) are still in the room down-stage. The box-headed figure enters the room, takes off the box, turns out to be a woman, and has a chat to Oedipus (about what I know not, as I was so caught up in the visual spectacle at this point I’d stopped reading the surtitles – which is a nice way to be, but not much use for relating what the hell’s going on). Eteocles turns up in military fatigues and also has a chat with Oedipus. The shot figures from the garden get up and have a more violent confrontation with Oedipus – which his daughters are forcibly held down on the bed, hands over their mouths, in positions that look like they could represent or turn into rape, while the blind Oedipus chats on, oblivious.

It ends rather suddenly, although I’m sure that’s Sophocles’s fault as much as anyone’s – it just doesn’t feel like a very conclusive or climactic moment. It just kind of stops.

As productions go, this is largely squarely in the realm of The Solid. It’s by no means a revelation, but nor is it an embarrassment (apart from maybe the nearly naked women and fully clothed men – do we need Blurred Lines at Colonus? I think not). I’m sure it will do respectable business both domestically, and probably on the international touring circuit, but I’d be surprised it is garnered any of the raves that Faust did either.

Perhaps most critically, I’m not really sure what it was trying to achieve beyond a classic narrative, competently delivered. If it contained a critique, either of society/the world/something or of the play, then I properly missed it – which I’m totally prepared to say could be entirely my fault: I’ve only been here a week, so local references and/or politics are still going to whizz over my head unless underlined three times in neon. On that front, I’ll be interested to read the other reviews when they come out, and will try to update this piece with links.

[in other news, yes, I’m quite pleased I got this review up two and a half hours after the show came down. If I have any extra thoughts having slept on it, I’ll also add those below, as I’m aware this is much more describe-y than in any way analytical...] 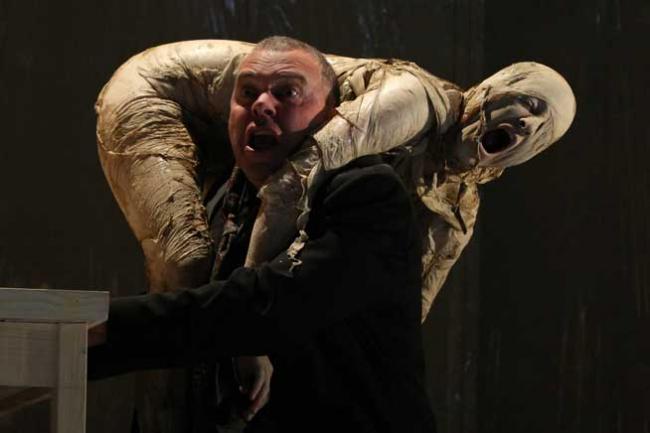