[written for the programme of Quartett at the Royal Opera House] 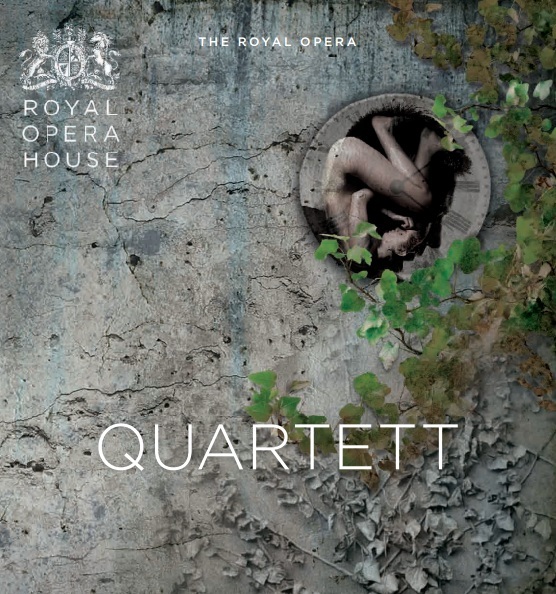 Heiner Müller is Germany’s most important dramatist since Brecht. He was born in 1929, three and a half years before Hitler’s rise to power. An early prose piece, The Father (1958), records an early memory of his father – an official of the Social Democratic Party – arrested by the Nazis in his bed at four o’clock in the morning, and imprisoned in a camp for a year. The spare, stark prose, describing what must have been an unimaginably traumatic memory, is perhaps as good a way in to understanding Müller’s life and work as any. In a later piece, Obituary (1975/6), he describes the suicide of his first wife in similarly dispassionate language, this time intercut with savage, capitalised, unpunctuated poetry.

For the majority of his life, until its dissolution, Müller lived in the DDR (Deutsche Demokratische Republik). In 1954 he joined the German Writers’ Association (Deutscher Schriftsteller-Verband, DSV), and in 1959 was one of the three winners of the prestigious Heinrich Mann Prize. However, despite his Marxism, he quickly found himself out of favour with the state, which censored his play Die Umsiedlerin (The Resettler Woman) in 1961, later that year also banning him from membership of the DSV.

It may be instructive to compare the young Müller with the ageing Brecht at this point in their careers. As a young writer, director and dramaturg, Müller wanted to work with Brecht, but Brecht thought otherwise, and this was a crucial turning point. Rather than becoming indoctrinated into what was to become a cult of Brecht during the DDR years, Müller instead developed his own theories of theatre, and a harder, fiercer, more dissonant literary register. Where Brecht capitulated with the totalitarian regime (famously rehearsing his version of Coriolanus throughout the workers’ revolt of 1953), told easy-to-understand communist fables, and had sat out WWII in America; Müller lived through the horror of Nazism, the war, and the savage destruction of Germany by the Allies and USSR. His plays offered uncompromising, difficult-to-understand critiques, and he was frequently banned, unpublished and censored as a result. Quartett itself was banned in 1981 on the flimsy pretext of its being “pornographic”. At the same time, Müller’s work was enjoying massive critical success in West Germany and across much of the rest of mainland Europe. Apart, notably, from the UK.

Reasons why Müller’s works may have struggled to find a British/Anglophone audience may include the density of his language, the sheer difficulty of “understanding” what they “mean”, and the ever-present problem of translating his agile texts adequately-as-poetry while accurately-as-political-philosophy.

“Quartet is a refection on the problem of terrorism, using material which on the surface has nothing to do with it. I never read the whole of Laclos’ Les Liaisons Dangereuses. My key source was Heinrich Mann’s preface to his own translation...”

The text that the above quotation introduces is as strange, alien and unfamiliar to the British notion of what a “play” is as it’s possible to imagine. For an easy point of reference, compare the concept of Quartett, which apparently contains only two named speakers, is mostly constructed from lengthy monologues, and is, according to the author is actually “a reflection on the problem of terrorism” with Christopher Hampton’s British adaptation of the same novel only four years later for the RSC (and which was subsequently turned into a Hollywood film). The differences of approach and expectation are the clearest, quickest example of the differences between British and German theatre cultures I can think of. Where the British version tells irons out the question of how to adapt an epistolary novel into a play which moves through the story with the characters speaking lines of dialogue to one another until all the key scenes of the book have played out through a satisfying dramatic arc. Müller, by contrast, solves the problem of how to present a novel des lettres by creating a game in which two speakers play four characters. And – while reflecting on “the problem of terrorism” – at no point tries to relate the narrative trajectory of the book.

Reviewing a recent Australian production of the play, Alison Croggon suggested “Müller presents us with a picture of hell, in which souls are tormented by their own decaying bodies. All that is left to titillate these jaded appetites is the destruction of innocence.”
A review of an earlier production in the New York Times also observes “In a program note, Mr. Muller expresses his amazement that so little is generally made of the ‘comic aspect’' of his work. Up to now Mr. Muller's sense of humour has been a secret...”

To a British audience it may at first seem perverse in the extreme, but for Germany this sort of reflection on “motifs suggested by...” has become a major dramatic form now. More than simple “adaptations”, such texts-for-theatre innovate in extremis, while still demonstrating a linear theatrical debt which runs all the way by to the ancient Greeks.

Beyond the already non-naturalistic texts themselves, there is also the question of how they might be expected to be produced. Alongside Müller’s dramatic writing there is also his work as one of the leading post-Brechtian directors of his day. This school in turn gave rise to the “postdramatic” school of direction, in which pre-existing texts would routinely be cut, re-edited, and turned into often monolithic-seeming slabs of text and dialectic.

On 9th November 1989, the Berlin Wall fell. Only four days earlier, breaking off from rehearsing a new production of Hamletmaschine, Müller had addressed a 500,000-strong demonstration in East Berlin’s Alexanderplatz. In a move of almost characteristic perversity, claiming he had nothing of especial interest to say himself, he instead read out a call for independent trade unions, which its writers had not been able to present themselves. This short-circuiting of the optimistic spirit of the demonstration perhaps served precisely the same purpose as the play itself – ever-questioning, never-satisfied, refusing to give in to optimism in favour of rigour and continual struggle.

Müller continued to work in reunified Germany, and was made artistic director of the Berliner Ensemble in 1995. His last production for the theatre was a version of Brecht’s Der aufhaltsame Aufstieg des Arturo Ui (The Resistable Rise of Arturo Ui), starring Martin Wuttke in the leading role. It premièred after his death on 30th December 1985. It is a testament to his enduring popularity – and perhaps also to a catastrophic misunderstanding of his purpose in making theatre – that the piece is still running that, with the same cast, to this day, 18 years later. Similarly, thanks to the death last year of one of Müller’s greatest collaborators, Dimiter Gotscheff, a new version of his 1972 play Cement appeared at this year’s prestigious Theatertreffen festival in Berlin alongside a retrospective of Gotscheff’s other work including Müller’s uncompromising translation of Aeschylus’s The Persians.

Müller lived all but nine years of his life under dictatorships; it seems a cruel irony that his works have now outlived him in “freedom” for twice that long, but Müller considered his circumstances an advantage to his writing. What we understand as the extremity of his circumstances make the extremity of his work easier to comprehend, but one suspects he would have found this modern neo-liberal, globalised economy every bit as grotesque and extreme; as such his continual excavation and excoriation of power and control remain absolutely vital as art through which to discover our world today.