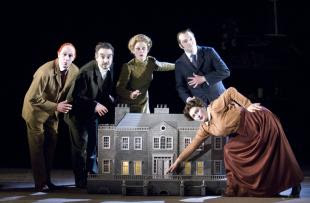 It’s been a long time since a piece of theatre has made me quite as irritable as this.

Hoipolloi’s adaptation of Edmund Gorey’s short picture book The Doubtful Guest is the most ill-conceived adaptation I have ever seen. Adaptor and director Shôn Dale-Jones has wilfully misunderstood everything about the book that makes it good.

Yes, there’s an initial problem in adapting a short, illustrated nonsense rhyme for the stage; reading the actual text out would take about five minutes tops. Beyond that, there’s not much of a narrative drive to Gorey’s original: a strange, silent creature (a kind of bipedal aardvark-cum-penguin wearing canvas sneakers and a scarf) turns up on the doorstep of a large country house on a dark and stormy night and stays for the next seventeen years. The rhyme describes the creatures many peculiar habits, accompanied by a beautifully idiosyncratic set of drawings.

Dale-Jones fails to grasp everything that is funny and charming about the book and creates an hour and a half of theatrical Polyfilla to cover the fact. Rather than focussing on the strange creature, he turns his attention to the family with whom it comes to stay. Then, in line with his policy of not getting the book at all, he transforms them into an unfunny set of caricatured upper-class twits – all shrieks, silly voices and cartoonish costumes. Having set them up as 2D nonsense, he then tries to make us interested in their reactions to the creature. God knows why.

To this end, he makes up a whole bunch of stuff that isn’t in the book, divides up rhyming couplets to give himself more things to play with and then, most irritatingly, mucks about with bits from the book to produce a completely different story – “Every Sunday it brooded and lay on the floor, Inconveniently close to the drawing-room door” becomes a scene in which someone is trapped in said drawing room for 31 days and there is much frantic running around making other doors elsewhere which the creature magically blocks as well. Sure, it’s an adaptation, but, really, is this better? Or even good?

The net effect of all this witless fiddling it that the story is transformed from a lovely, intriguing, opaque thing into a pantomime of gibberish. Stage time is frequently filled with actors just running about and screaming or endless minutes of mugging and gurning. And that’s once it gets started. The first ten minutes (it feels like half an hour) involves some utterly cack-handed attempts at meta-theatrics. Leaving aside the lazy solipsism of putting there in the first place, the explanations of how theatre operates given from the stage suggest someone without even a working understanding the conventions that they think they’re playing with. Not only is the adaptation lacking any kind of intelligence, so, apparently is the stagecraft of the writer-director.

I’m not quite sure how Hoipolloi got to where they are now (main stage of the Traverse, Total Theatre Award nominations and something of a reputation). I concede I’ve come in very late on this particular bandwagon, having only previously seen The Story of a Rabbit which I also detested. However, on the strength of these two pieces, if there was ever anything worthwhile about the company it has quite clearly long since departed. The kindest thing now would be to cut off all funding and put them, and us, out of our misery.

Edit: In looking for illustrations for this piece, I happened to notice that Hoipolloi had a blog - this response to Joyce Macmillan's Scotsman review of the show is very telling.
Anyway, here's some real Gorey to cheer us all up. 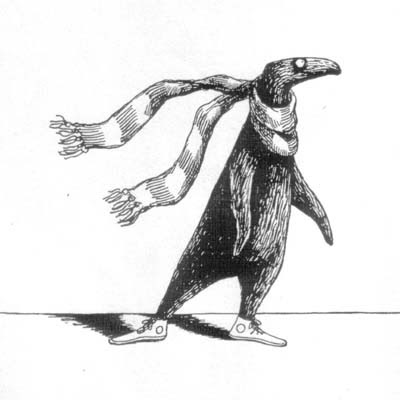 You do great grump, Andrew. Oh, and welcome back. I've missed your blog.

Rage! Rage! Rage!
I can see the dance in my mind's eye.
It's great.
see you soon,
Matt x