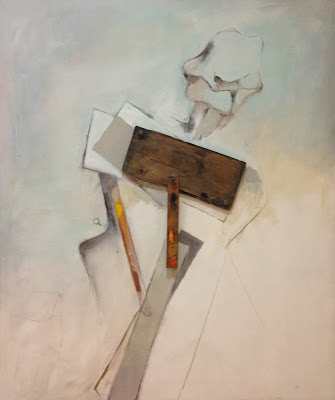 [I should say, that this is REALLY NOT A REVIEW. It’s an expression of interest, enjoyment and support, BUT FOR THE LOVE OF GOD, PLEASE SOMEONE SEND AN EXPERT SO I CAN READ ABOUT IT...]

Tadeusz Kantor is pretty much unarguably one of Poland’s two most important theatre directors of the 20th Century (the other being Jerzy Grotowski). I had absolutely no idea that he was also a visual artist (I apologise for that distinction, and indeed for my ignorance of his work in general, which is pretty limitless).

There are four small-ish rooms of the stuff, here. And, especially in amongst all the noisiness and bustle of the Fringe, it feels incredibly valuable to just wander quietly round and see some really rather well curated original artworks – drawings, paintings, film – being displayed for apparently no reason other than someone thought it would be a good thing to do.

I’ll freely admit here that I don’t know even remotely enough context to talk authoritatively about the pieces, but there is one piece – a kind of poem for an exhibition – translated from Polish which I found incredibly striking:

A work of art,
an isolated
panelled piece,
bought to a deadlock
and closed up
in a structure and within a system,
unable to change or survive,
forms an illusion of creation.

What is essential for creation,
is fluidity
change
frailty
transitoriness,
like life itself...

There is also the film, Attention....Painting! from 1958 also feels somehow incredibly moving. I don’t know what Kantor’s status was in Poland in 1958, or whether the communist authorities there had a more relaxed attitude to abstract art than their Soviet overlords. The film apparently won a prize at the Venice Biennale in ‘58, so I’m guessing it wasn’t fatal. But, it is fascinating nonetheless to sit and watch the film as a document, over half a decade old, and as art in its own right, that is simultaneously itself and so steeped in history and context.

[Info bit: it’s FREE, open daily, and hidden right at the back of Summerhall’s second courtyard, behind the Paines Plough Roundabout thingy, and up some stairs...] 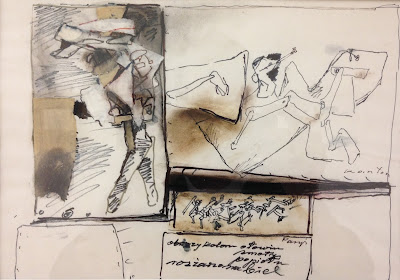