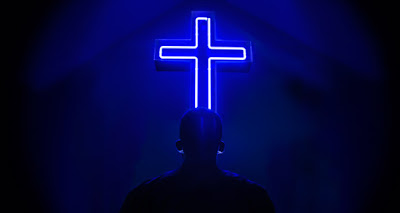 It’s interesting. I didn’t really go for Lucas Hnath’s Death Tax, playing as part of Vicky Featherstone’s inaugural Open Court season, directed by John Tiffany. I snarkily suggested it was the work of a guy who had “read Oleanna until he’d absorbed more-or-less everything you could learn about playwriting from it.”

I’ve no idea if The Christians is an earlier or later play, but whichever it is, in Chris Haydon’s splendid UK première production, without stinting on specifics or tightly constructed characters and arguments, it achieves something close to the universality of Arthur Miller’s The Crucible (which is probably the single best “proper” American play ever written).

The set up of The Christians is as follows: We’re in a church. An American “Mega-Church”. The pastor, Paul (William Ganimara), is thanking us and giving a sermon. The large choir behind him sings. He recalls how we’ve built this church up from nothing. How *our* money has finally paid off the debt for this huge building we’re sitting in. And, now, he wants to deal with “a crack in the foundation of this church”. Not a literal crack, but a metaphysical one. Paul is worried about Hell. Paul is worried about the concept of Hell. Paul basically explains that the concept of Hell is inimical to his idea of Christ’s love. He recounts a story told by a missionary at a conference he attended in which a young man who wasn’t a Christian saved his sister from a burning building and died in the attempt. The missionary was saddened that he had not converted that young man thereby saving him from the fires of hell. In Paul’s scheme of things, that is not how God works. Nor is it what Christ says. Or what the bible says. (It’s a great speech, by the way. Properly moving.) It expresses a faith – evidently heretical in parts of America – that Christ didn’t die so that 21st Century Preachers would have something to threaten “sinners” with. Quite the reverse: that, as Paul puts it, God is unimaginable; God doesn’t think like a a small-minded man. It is, in short, about a believe in goodness. Pure goodness, even. An attempt to believe beyond vengeance, and malice, and judgement, and to actually believe in fairness, equality and God’s infinite love. It is A Good Idea. Period.

Almost immediately there’s a counter argument. Paul’s Associate Pastor, Joshua (Stefan Adegbola), *does* believe in Hell. Hell is part of what he’d been believing up until now, and Paul can’t just take it away. Hell is even part of *why* he believes. Joshua leaves and takes fifty congregation members with him. I won’t go through the whole plot now, but you get the point. Later there’s another exchange where a congregant called Jenny (Lucy Ellinson) puts the point again, not only that she’d donated to the funds to pay off the cost of getting the church built on the basis that there was a Hell, but also that isn’t it a bit convenient that Paul didn’t mention this radical change in the church’s direction until after that debt was paid off? And this is perhaps the trickiest part of the play; that Paul has, despite the goodness of his idea, behaved with pragmatism and disingenuity as well. There is a certain amount of bad faith in his good faith, so to speak.

Watching the play, I couldn’t stop thinking about the Labour Leadership election. And the idea of Socialism generally. The play offers one of the most simple, striking images of Conservatism you are ever likely to hear: that a lot of people are happier paying for Hell, and that the Hell they are paying for is for other people. Here they are, this congregation, presented with the watertight, convincing, Biblically backed-up, absolutely supportable suggestion that God loves us all so much that we have all already been redeemed through the blood of His son. And some people prefer the idea that other people – who maybe haven’t worked as hard as them, or made the sacrifices they’ve made, or been as “good” as them – will be eternally damned. They need their “sinners” to suffer.

But it’s not simple. Obviously believing in anything comes with a cost, or at least with a very deep breath. The problem of evil is still a huge theological debate. The hypothetical man who murders their son, or Hitler... Where does God draw the line with this new (to this congregation) forgiveness we’re talking about? Similarly, Associate Pastor Joshua’s own mother was not a Christian. By his absolute, unwavering vision of there being a Hell for unbelievers, he puts his own mother into it.

In short, one possible reading of the play is a study of bad faith, of most people being generally lousy. Of a good man’s good idea being rejected *because* people are either vindictive, or because they lack the imagination for something better. This is the version where Pastor Paul is Jeremy Corbyn (a reading made all the more plausible by William Ganimara’s white hair and short beard – although his folksy American accent and mild manner reminded me of a likeable version of Reagan). However, against this is the idea that he’s prepared to haemorrhage church members, and maybe even sacrifice his marriage for his beliefs. Certainly, as far as the member-haemorrhaging goes, this also could be seen to be a terrible warning re: Corbyn.

It’s interesting that the play – running time 1hr20 – stops where it does. The narrative, though by no means cut and pasted, does echo the story of Carlton Pearson, the Pastor of precisely such an American mega-church who did indeed decide that Hell is what is around us, not some burny afterlife dimension, and that all people are saved. Apparently his story does indeed see him excommunicated from his former church, but subsequently begin a new, successful ministry with a different constituency who found his teachings more plausible and compassionate. That is to say, stopping the narrative where Hnath does, does make this tight, plausible, dramatic and really a very fine study of almost any disagreement between leaders of men – as much Julius Caesar as the Labour Leadership Contest or The Crucible. I was also reminded of the God of Chris Goode’s God/Head, which I don’t think I’ve actually thought nearly enough about.

Haydon’s production is bloody good proper theatre, but actually, it’s also got a lot more avant garde-y oomph than you first suspect. Oliver Townshend’s set is – as required – a big old front end of a church, and Pastor Paul and Associate Pastor Joshua address us through microphones. But then, there are scenes where Paul and his wife Elizabeth (Ha! I knew there was a reason I kept thinking of the Crucible) (played by Jaye Griffiths) are in bed, in their home, and they’re *still* talking to us through microphones from the front end of the church. This strikes me as good and interesting.

So, yes, The Christians is a properly good play. This is a properly good production of it (bleugh, consumer guide-y), but what’s best about it, is the fact that it feels like quite an unusual beast in modern theatre: a play about a good man with (what I’d say is) a(n indisputably) good idea/point, and what happens to good ideas when they go out into the world. That said, seeing the play like that, I wish it could have had a more unapologetically upbeat conclusion. It’d be nice to see the good guys actually win on stage once in a while, wouldn’t it? God knows we see precious little of it in the real world.
Posted by Andrew Haydon at 21:18