The Beanfield – TheSpace on the Mile, Edinburgh 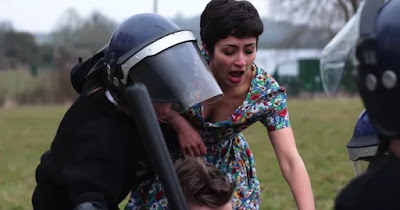 It’s far too early in the day to declare Breach Theatre’s The Beanfield “The Most Important Piece of Political Theatre on The Fringe” but, by God it’s tempting.

The form of the piece is deceptively simple. The company – recent graduates of Warwick University – set out to create a “reconstruction” of “The Battle of the Beanfield” in which armed members of British police force attacked a peaceful convoy of travellers on their way to the Summer Solstice festival at Stonehenge. (“Battle” is a misnomer, but I can’t think of the pithy expression for and the unrestrained violent charging by armed thugs at peaceful people minding their own business.)

They video interviews with the journalist Nick Davies, who happened to be one of the only journalists who witnessed the violence first hand; a woman who was one of the travellers, and a man who was one of the policemen. They also video themselves talking to members of a medieval historical battle reenactment society on Skype, and their own rehearsals, as they practice, well, fake-fighting.

Intercut with these elelments is a highly narrative-ised account of going along to the Summer Solstice in June 2015. It’s told in the second person (“*You* do this, *you* have this thought...” etc.) and delivered in fractured chorus by the whole company.

There are so many aspects of the piece that are properly brilliant. The whole concept of six performers trying to recreate a “battle,” involving roughly five hundred travellers and five hundred police, is – on the face of it – clearly futile. Almost comically so. (although as the cover photo, top, proves, not impossible.)  I was reminded of a lot of what Tim Etchells said ahead of Forced Entertainment’s Complete Works – “We certainly work with frameworks that guarantee a certain amount of “failure”... On the one hand, the tabletop is pathetically small and the objects are ‘dramatically unpromising’, but the interesting thing is that if you do the work in the right way, something happens; something dramatic happens”. This feels at least related to the strategy here: the good intentions and sincerity of the company aren’t enough in themselves, so they have acknowledged this and foregrounded the problem.

At the same time, the narrative part feels like, in a different production, it could easily pass as something by Martin Crimp. It’s got that same musical, pinpoint-sharp, nihilist’s eye for disappointing details of the real world. That same ear for just how awful the things people say and think are.

And, against all this, are the recollections of the violence and the brutality and the sheer hellish reality of what the police did. Beating unarmed men, women, and children. Burning people’s homes. Kicking their animals to death.

Something crucial about this piece, a small fact detailed in the programme, and mentioned only once in the show, is that members of the company were also involved in the *very heavy-handed* police break-up of a peaceful student protest at Warwick University late last year. An actual sound recording of that is played close the the start of the show, and, Christ, it’s pretty self-evidently horrible. The repeated crackling of a Taser, a girl screaming and crying, some people further off being all “WTF?” in disbelief.

It’s fascinating. I almost worried that there were bits where there company were just dicking about on video, and you think, “Is this ok?”. But, at the same time, there was the point where the former-policeman describes how the police that day would be larking about and having banter with each other, and then as soon as a traveller came within earshot they would switch entirely to dehumanising him or her, being vile, violent, and then, later, snapping back into friendly banter.

It’s chilling. It’s chilling not least because *of course* it reminds you of this. And, in a way, that occasional lack of solemnity on the part of the company echoes both this “schizophrenia” (the interviewee’s misapplication) on the police’s part, and the problem of “only pretending”. *Obviously* the company could have cut the bits where they laugh. That they didn’t I think deserves to be treated as an interesting artistic decision and *read* as such. There is another point in the video of the making of the “re-enactment” where one of the company breaks off and is actually upset. It’s a moment which is strangely incredibly affecting.

Primarily this is a brilliant bit of documentary making, reminding a whole new generation of something appalling that happened thirty years ago. But, beyond that, and far more urgent, is the unflinching implication that this isn’t one of those events that we can look back on and complacently imagine that “things were very different then,” and “it couldn’t happen now”. It absolutely can and does still happen.

Most of the hundreds of people beaten up by the police at the “Beanfield” were never charged with a crime. The handful who were charged were not convicted.

There was never an inquiry into the behaviour of the police.

[interestingly, the law was changed the next year, and two of the three Warwick protestors arrested last year were successfully convicted of “Breach of the peace”.]

You leave The Beanfield feeling shaken, absolutely furious, and entirely powerless. Yet, with a strong conviction that at least the future is in the hands of some seriously smart, seriously politically committed theatremaker/activists.