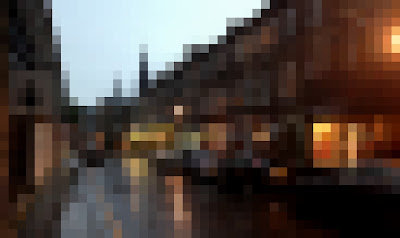 I have just had a look at my Edinburgh stuff from a decade ago. It’s terrible. Given that I was 29 when I wrote it, I can only apologise, and blame anything from not owning a laptop (and so having to write everything incredibly fast in internet cafés) to, well, not really knowing what the hell I was doing, or why, or for whom.

It’s odd. By August 2005 Raw Talent, the 50-year history of the NSDF, had been published, and at other points that year I managed to turn in passable copy, but during the Edinburgh Fringe, not so much.

In 2005 I was sharing an Edinburgh flat with both Chris Wilkinson (now Haydon – obviously no relation), now artistic director of the Gate, who is up this year with The Christians at the Traverse, and Dan Bye, who this year is up with his latest show Going Viral. Back then – while Dan had his show Bella and the Beautiful Knight (which, a decade on, I think I can admit to having absolutely hated in pretty much every significant respect) by Oliver Emanuel, whose Dragon is at the EIF this year, and Chris had been assistant director on The Found Man at the Traverse, if I remember rightly – both were also working as critics.

Indeed, Wilkinson/Haydon won the Allen Wright Award and discovered New York’s The TEAM who were in Britain for the first time, playing in an easily overlooked attic in C Venues, with Give Up! Start Over! (In the darkest of times I look to Richard Nixon for hope). Wilkinson gave it a four- or five-star review and nominated them for a Scotsman Fringe First; this Autumn they are opening a show at London’s Royal Court.

I mention this, in part, because young theatre people sometimes ask if they can make work and review work at the same time. I’d point to the above as being a pretty perfect example of why I think YES. Indeed Wilkinson only really stopped the theatre journalism for good when Haydon was made artistic director of the Gate. Beyond that, it also demonstrates the value that a good critic has for the wider theatre ecology.

(Of course, it now has the unwelcome extra dimension of showing just how problematic the Scotsman’s scaled-back coverage is. Because, truly, it did also feel as if Give Up! Start Over! was one of only about three good shows of the 70-plus random things Chris was sent to. You have to pay people to do that. And, moreover, you have to be able to trust they’ll recognise what’s good when they see it...)

Of the shows I did write about in my own lamentably spartan coverage, probably the most interesting is Peter Morris’s Guardians, if now mostly because it marks a very early step in Michael Longhurst’s journey to becoming one of Britain’s most acclaimed directors. The most interesting show that I didn’t write about was almost certainly Chris Goode’s Home Made, which, as well as being a lovely piece in and of itself, also marks the first time that Lucy Ellinson (also in The Christians this year) worked with Goode. Perhaps also when her talent was first noted in the national press.

In view of my last blog post I’m also interested by my review of Nowy Teatr Poznań’s Faust, in which I grumble that “[i]t is hard to resist the idea that some critics are acclaiming this just to make themselves look internationalist and clever, and in the process, are doing neither potential audiences nor themselves any favours”. (Which, ten years down the line, sounds like something straight out of Billington’s X is for Xenophobia piece.) As it happens, this wasn’t so much a theory-of-everything, as a direct response to one of Ian Shuttleworth’s semi-regular spats with me, and consequently his review of Faust. Looking back at his review now, it’s hard to deny that he flags up very precisely what it was about the production he liked, but equally, that the star-rating does rather imply that the piece might transcend those specifics. (Which it didn’t.) Remembering that Faust ten years on, I don’t think my greater exposure to Polish theatre in the interim would have necessarily improved my experience of it. Even in 2005 it felt a bit heritage-y, and seen in one of the Assembly Rooms’s vast, unworkable, temporary spaces, it felt more like staring at a UFO marooned on a precipice than theatre.

So, yes, that’s small snapshot of my Edinburgh a decade ago. At that point, I still don’t think I had any intention of becoming any more of a proper critic. I liked editing Noises Off at NSDF, and I liked getting free tickets in exchange for reviews on CultureWars, even if, in 2005 during Edinburgh, I was experimenting with some very low wordcounts. Still, if nothing else, it’s an interesting reminder of that extended period I talked about a couple of weeks ago where I don’t think I really *got* theatre. Or when much theatre didn’t *get* me. Or something.

I think the worst review I wrote in 2005 was of my favourite show that year – Daniel Kitson’s Stories for the Wobbly-Hearted. Which was just gorgeous. And that’s pretty much all the review says. Repeatedly. Although I presume that all the negatives mangling that last line – “it would be impossible for anyone with even only the smallest shreds of humanity not to be utterly seduced” – mean that it too is a dig at someone. Mercifully time has erased the memory of that squabble leaving only my bad prose.

So, if there’s one take-home message from this blog it’s this: use your reviews to talk about the work and not to settle scores; it doesn’t work and the reviews read funnily in the future.
Posted by Andrew Haydon at 23:27