Can I Start Again Please? – Summerhall 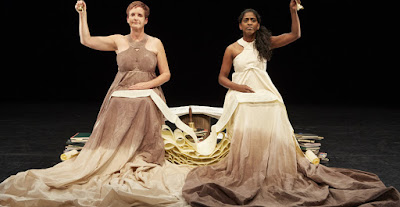 
The last Edinburgh Fringe review I wrote in 2012 is my incomplete account of Wojtek Ziemilski’s Small Narration at Summerhall. Which I loved. The review, like the show, started with a quote from Wittgenstein:

Completely by coincidence, watching Can I Start Again Please, I was sat just down the row from Lucy Ellinson, whose first piece of writing-for-theatre I ever saw (back in 1999), featured the phrase “Can I start again please?”. Also in its opening moments.

It is so difficult to find the beginning.

Can I Start Again Please? also very quickly introduces a quote from Wittgenstein. The first of several. It is the one line punchline to his Tractatus Logico-Philosophicus: Wovon man nicht sprechen kann, darüber muss man schweigen. Here it is given as: “Whereof one cannot speak, thereof one must be silent.” It is entirely stripped of context. It is not “7...” It is: “Wittgenstein said...” It is not: “What Wittgenstein wrote in German, and was elegantly translated by Frank P. Ramsey and C.K. Ogden in English as...”

It is difficult to begin at the beginning.

The top of the programme – which I read moments before the piece started – says:

“Can I Start Again Please

“is about the capacity of language to represent traumatic experience, in particular childhood sexual violation.”.

On the stage, Sue McLaine the writer and performer, and Nadia Nadarajah, performer and BSL interpreter, sit wearing similar (Grecian?) dresses, gradually scrolling a long script across their laps like two of the Fates.

The next bit of Wittgenstein quoted was about context. I scribbled it down wrong, so had to do a word-search in the book itself.

The six mentions of “context” in the Tractatus are:

from 2.0121 ... If I can think of an object in the context of an atomic fact, I cannot think of it apart from the possibility of this context.

4.23 The name occurs in the proposition only in the context of the elementary proposition.


These handily random line from Wittgenstein’s philosophical treatise give some indication of what troubled me about the use and subsequent interpretation of the first line.

“One cannot speak the truth if one has not yet conquered oneself” (Culture and Value, Wittgenstein – quoted in McLaine)

Quoted, McLaine: “Qui tacit consentit” Latin, meaning: “who is silent consents”. In this instance, McLaine uses the phrase to condemn a patriarchal world in which silence is taken as consent. An alternative interpretation is the maxim “All that is necessary for the triumph of evil is that good people say nothing”.

For the reasons quoted above, I found Can I Start Again intensely problematic. I didn’t know the piece was about child abuse. At the bottom of the programme an “I” makes it seem likely that it is first hand experience of abuse by the writer/performer. If I’d known that, I’d have probably skipped seeing the piece. (Because I find writing reviews of pieces in which someone relates a personal trauma ethically dubious at best. Yes, we could debate the extent to which any piece of art is ultimately a result of the artist’s personal traumas, but even if they have the good grace just to give them to a made-up character, then it feels that bit more acceptable to write about it. Because, really, how am I going to tell anyone the way they related their personal trauma is good or bad? I’ve done it in the past, and I didn’t like it one bit. So...)

Since I have seen the piece, though, and since it has won prizes, and got wonderful reviews, it seems ok to wonder about the use of Wittgenstein. Because the way the piece evokes him, and especially that last line, seems deeply problematic. Out of context, it sounds like he’s saying “don’t speak about unspeakable things”. However, I *think* – and I’m a long way from being a student of logic – this is a conclusion to the world being “a totality of facts, not things”. I *think* W. is asserting that opinions are not the province of logic. Only facts and unfacts.

The piece, I suppose, explores abuse from the perspective of the person who has been abused. That person wants to make the abuse go away. MacLaine desribes (her?) six-year-old self’s method for making it unreal. It is obviously an acutely uncomfortable thing to watch, no matter how beautifully done it is. And the problem with the bandied about Wittgenstein is that is keeps reasserting that the world is made up of facts in one’s head.

[Fwiw, the person I saw it with didn’t read the programme thing before seeing the piece, and so mostly enjoyed how hypnotic and playful it was. I just sat their seeing everything leading up to the abuse. Which was powerful, yes, and well done, but also incredibly difficult.]

Oddly, it also reminded me very much of Tim Crouch’s The Author. The phrasing and concerns just as much as the subject(s).

Except, where The Author was really about the audience, and how meaning is/was created by us, this was more concerned with how the performers create the meaning to transmit. Unfortunately, even though we in the audience weren’t quite as primary a target, we were still creating meaning for ourselves out of the materials we were given. Which, I suppose, is where my getting side-tracked by whether this was a fair representation of Wittgenstein came in.

I’m not really sure what Wittgenstein had done wrong to be treated with such disdain (apart from maybe to be misunderstood), but I did spend much more time than I think I was meant to worrying about it, and trying to remember the rest of the Tractatus, and, well, you get the picture. I was both present and miles away all at once.

None of this is criticism. I think this is probably a really good show. I just got distracted by something in it. And possibly that in itself is because I don’t really get on with shows about personal trauma. Yes, I *know* it’s unimaginably worse to actually suffer an actual trauma, don’t write in. The suffering still doesn’t mean I’m obliged to watch the resultant artwork, or, if I do see it, not obliged to like it. But that’s where we came in on this discussion, isn’t it?