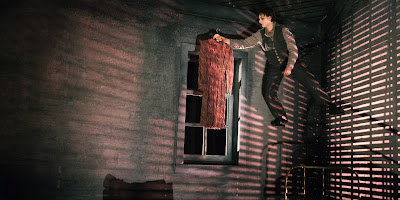 Man to Man has already received a glowing five-star review from Mark Lawson in the Guardian, and he writes well and persuasively about it.

It’s interesting going back to his review after seeing the show. Because, it’s not an *inaccurate* review (although Berliner Zeitung puts the date of the play’s Bochum première as 1982, not ‘83, in their review of the 2009 Berliner Ensemble revival. And I thought the Swastika in the snow he refers to was drawn with piss, not a stick), but – well, we’re different people; however – it feels like Lawson has just recognised the unavoidable facts of the matter: that the piece is indeed a masterpiece of technical skill on every level, and has marked it as such.

For my money, while, yes, the production is very well made indeed, it didn’t especially work for me in any meaningful sense. I don’t know much about Manfred Karge, although the fact that he seems to be part of Claus Peymann’s lot means we’ve almost certainly missed the boat with him.

The play was written in 1982, 37 years after the end of WWII. It reflects on (then) recent German history – pre-war depression to post-war Soviet occupation. It is now nearly as long since the play was written (33 years ago) as the end of the war was then. And, I’m not sure I really bought the fig-leaf Mauerfall update added by Karge, well, some time after the Berlin wall came down. Obviously.

The original feels quite carefully crafted around this central metaphor of a woman dressed as a man. It reminded me a lot of little Oskar’s refusal to grow in The Tin Drum – Gunther Grass’s classic novel about Germany during fascism. Jacke wie Hose (the original title – Jacket like trousers, a colloquialism for “same difference”, but obviously apt, given the cross-dressing in the play) was written when no one envisaged an end to the Cold War, or ever foresaw the possibility of German reunification.

So, yes, the question of what we’re watching and why felt quite crucial. In terms of the production, Alexandra Wood’s translation is a good rendition of how the text might operate as literature in German. Obviously/annoyingly, Wood can’t also translate how we as Britons receive that information, and so Bruce Guthrie’s Best of the Nineties Physical Theatre production (think: Shared Experience meets Shock-Headed Peter with added (masterful) 2015 video projections) always feels a bit like a bog-standard English monologue that’s forgotten to put in all the bits anglophone writers rely on.

That’s the what, anyway. I have no idea about the why. Because it’s there? Because it’s good to see modern classics from another culture? Because it lends itself to virtuosity? Not offensive reasons to put something on, at all. And they have done it very well, technically. But, for whatever reason, I think it’s the thing that I’ve seen on the Fringe that has left me coldest, so far this year.

Fans of technical accomplishment will love this technically accomplished production...

[Oh, and, to forestall the self-important troll who lives under Lawson’s review: yes, I’m well aware that a different production of the play was on at the Park Theatre last November, thanks. I’m not sure what you wanted Lawson to do with that information.]
Posted by Andrew Haydon at 11:59