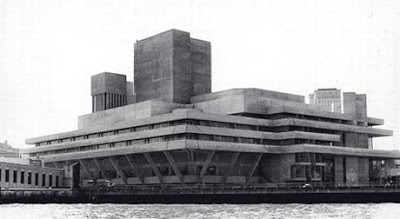 The first line of the Communist Manifesto conjures the image of a spectre haunting something; the elephant in the room you must describe. The Kevin we need to talk about, if you like. The spectres haunting theatre are privatization, privilege, and selfishness.

In May the UK elected its first majority Conservative government for 18 years.

A recent news story in The Stage reported:

“Arts funding faces dramatic cuts after the Department for Culture, Media and Sport was told to prepare for a budget reduction of up to 40%. Chancellor George Osborne announced that in order to make £20 billion of government savings, unprotected departments – everything aside from health, schools, defence and foreign aid – needed to plan for two scenarios: a 25% cut or a 40% cut. Savings would have to be made over the course of the next five years.
“In a report entitled ‘A country that lives within its means’, the Treasury said it would prioritise spending that achieves the best economic returns, as well as that which promotes innovation, growth, productivity and competition. In addition, it said departments would be asked to look at how they can be managed more effectively, and should consider privatising assets that ‘do not need to be held in the public sector’.”

There’s not much of substance in that report that we didn’t already know, although the naked ideological claim of “assets that do not *need* to be held in the public sector” is remarkable.

When “in charge” of the country, the Conservative Party has taken things that were the shared property of the entire country – the railways, the utilities, the telecoms, the post office – and has sold them off – cheaply – to people and companies that can afford them. It then spent the money that the country made from the sale on subsiding tax cuts and more loopholes for the very wealthy.

In the last five years, as the leaders of the Conservative-Lib Dem Coalition, the broad thrust of their arts policy has been to cut the use of public money to fund the arts and to encourage the use of private money instead. Now they are in sole control, they are stepping up their ideological programme.

At this stage, I should say something comforting and “fair-minded” about the use of private money to fund the public arts. The problem is, the more I think about it, the more I can’t really think of anything.

In the present ideological climate, what’s “unfair” is to attack people for having too much money, and what’s not unfair is for anyone running a business to make jobs precarious, bring in zero-hours contracts, and pay minimum wages wherever possible, to “maximise profitability”. Never mind that in order to disguise this slide back into some sort of Victorian catastrophe, the government has to pay people with jobs *benefits* just to bring them over the poverty threshold. Which it’s also trying to abolish.

Ironicially, we do have a government that believes in sponsoring the arts with public money, but it does this by spending the public money on topping up the wages of the poorest workers, so that the companies which employ them at bargain basement rates can “stay profitable” (i.e. not do anything so silly as waste money on paying workers), make more money for their shareholders, and pay their CEOs and top executives yet more money. Those lucky individuals at the top of the food chain are then “free” to “choose” to “donate” some fraction of this enormous wealth to a theatre or theatres of their choice.

*Of course* there will be exceptions to this. Sometimes someone just invents something that, in the system we all live in, makes them a lot of money. And instead of spending the lot on big houses, expensive cars, champagne, yachts, and etc. they generously spend their time endowing theatres. And sometimes such people will even have spectacularly good taste. (And if it sounds unnerving to have to rely on the taste of private individuals, I guess we can console ourselves with the thought that even the taste of the state, in the form of the Arts Council, isn’t infallible.)

Radical redistribution and proper arts funding would be preferable, obviously, but under a Tory government it almost feels safer to rely on private philanthropists than on the government redistributing with anything even remotely approaching insight, let alone good taste.

And this is the stroke of genius in the Conservative free-market ideology: that the most practical way of fighting its decisions appears to be becoming as successful within the ideology as possible and buying your way out of them. At which point you have lost the argument entirely, but at least the artform is “saved”.

Tories reading this will perhaps complain that – typical of “the Left” – I am merely being dogmatic and “ideological”. No more so, however, than insisting the opposite: that more and more must be paid for with private money, that *public property* is “assets that do not need to held in the public sector”.

Because, unlike a lot of arts types, I don’t believe that the Tories really want to divest Britain of theatre altogether. Of course they don’t. Sure, they probably don’t want to watch left-wing plays any more than I want to watch right-wing plays, but that’s a different question*. What the Tories do want, and what Britain’s Theatre Industry is sleep-walking into giving them, is an arts sector which serves to herald the glories of “corporate giving”, privatization, and individual wealth, by existing entirely without state subsidy.

Already, private and corporate money is vital to the continued running of our publicly subsidised theatres. But, while they remain publicly subsidised, they do at least have a degree of accountability and a perceived duty to try to serve the widest possible section of society.  It is my belief that, as with the BBC, the Conservative Party would like all public money to them to gradually be replaced by private money.

At the same time, we are seeing the resurgence of the private theatre. I’m thinking here primarily of places like The Park Theatre and The Print Room, which I’m told exist largely because someone with a lot of money decided to buy their son or wife a theatre. That is completely their right, of course, and within the realm of Conservative Party policy, absolutely ideal. Being entirely outside the state sector, these theatres have no degree of accountability whatsoever. That is to say, we already live in a country where someone can just pay to become the artistic director of a London theatre. The theatre community, generous as it is, then lends them enormous amounts of minimum- or unwaged support. The richest get richer, and those much less rich effectively get poorer by helping them. And all for a project which has never had the remotest obligation to even try to be fair.

Of course, it’s not just the Park and the Print Room. The entire West End is privately owned. And despite being privately owned, it is also propped up as often as not with the work of state-subsidised theatres. Put simply, the public investment into things like War Horse, Les Miserables, Curious Incident and Matilda now makes a vast profit for the owners of The New London, Queens, Gielgud and Cambridge Theatres. It does, of course, also feed back to the NT and RSC too, but what a timid government whose arts policy doesn’t see the potential in nationalising the West End and instead looks to sell off “assets which do not need to be held in the public sector”.

Why this animus against privatization? Because it is an ideological trick and theft on a grand scale. Publicly funded theatres can and should be an expression of civic pride. Something a whole city can be proud of. If they are privately owned, or covered in the names of corporate sponsors, then a very different message is sent: “This is not your building. This is being done for you, by us. Be grateful.” (Or, worse: we don’t care if this is for you or not. We’re doing fine without you. You can’t afford a ticket? Not our problem.) Public subsidy is ideological, but so is its rapid and widespread withdrawal, and anyone who tells you it’s not ideological, just “practical” (“assets that do not *need*...”) is either deluded or lying.

It is vital to resist this attack on public property in every way possible.

*If you want a picture of how the current state of Britain’s theatre looks to those on the hard-Right, then you only have to read the reviews of Quentin Letts in the Daily Mail, or Lloyd Evans in the Spectator. Mr Evans even takes the step of writing the things he’d rather see staged. His latest, A History of Feminism (as told by a sexist pig) graces this year’s Edinburgh Fringe.

"what a timid government whose arts policy doesn't see the potential in nationalising the West End". lol
What a dreadful article. Reads like a hyperventilating GCSE politics student.

Why are you anonymous? It just screams "I'm pretty sure my views are not only unpopular but grossly immoral and I'm riddled with the fear of being exposed but I simply must have my mousy voice heard regardless." But I dunno, maybe you have good reason...

yeah I just didn't think it was relevant.