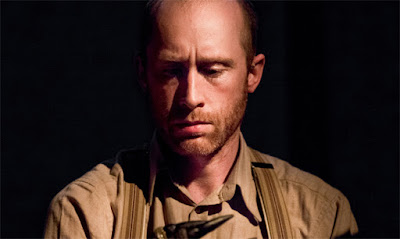 Lanark is one of those pieces of theatre that makes the entire practice of writing about theatre feel entirely idiotic. What do you do with those? Where do you even start?

It seems to make most sense to start at the end; after the show has finished. The ending is so beautiful, so bittersweet, so beautifully clever, and so cleverly beautifully judged, so thump-in-chest winding, and so full of everything that the previous four hours have been about, that you (I) leave the theatre in a bit of a daze. I probably bandy around “perfection” too much as a term, but it really is an incredible feeling.

Perhaps this is why Lanark is so hard to write about (two and a half days putting it off and counting). Because the level where it really works is *feelings*. You find yourself feeling a fuck of a lot. Which is great. Obviously. Yay theatre! Yay feelings! But it’s no fair to someone who has to write about it. I mean, it’s not like Lanark – an adaptation by David Greig (tho’ even the play itself acknowledges a certain amount of devising) of Alasdair Gray’s brilliant novel – doesn’t have ideas in it too. And it’s not like Graham Eatough’s staging doesn’t deserve a full description and discussion as well. But lists and descriptions and discussions won’t really do. Lanark is one of those pieces where without you ever really realising that it’s happening, you’re somehow completely transported somewhere else by the end. Emotionally, intellectually, everything. And, probably well past half-way you could have carped maybe a bit about this element or that aspect, and then there you are; without anything signaling “perfection” you’re frankly a bit of a mess and the whole kind of shimmers behind you (in time, in memory) as this perfect *thing*. It’s a weird thing, theatre.

So, having fronted up to the fact that everything I now say is going to be a bit prosaic by comparison to what I think I saw, shall I tell you the plot a bit, and what it looked like, and some of the ideas in it?

The novel Lanark, and consequently the piece of theatre, confusingly tells the story of a young Scotsman’s life – *probably* from childhood to death. I say probably, because a) the thing is told out of order, and b) lots of the parts are “unreliable” (as in “unreliable narrator”) to the point of hallucinatory. Do we take on trust, for example, in part one, that our (anti-?)hero is growing dragon skin on his arms. Is it a fancy, literary way of him talking about his eczema? No. It really is dragon skin. How do we know? Because later he discusses it with other character, and they talk about gradually turning into dragons. And then, later still, he goes into, well, *another world* – The Institute – and his girlfriend, Rima, who also *disappeared*, has actually turned into a dragon. We, the audience, see her, as a dragon, on stage. There is an actual dragon there. With her voice. And her arm. And... I really don’t want to spoiler this any more. Read the book. (No. Really. If you haven’t read the book anyway; do: it’s awesome.)

So you get the sort of territory. That is Act II. Which comes first. Just as, in the printed book, Part III comes first. Act I conflates Parts I and II of the novel. And, where part one – in terms of staging – is like a really relaxed, seventies, Brecht-meets-Dr Who (70s Who) thing, we’re suddenly back in on something less set-based; more architectural. In the first bit blocks of things, staircases, screens, are trundled about. In the second bit a lighting rig-high sort of climbing frame becomes everything from schoolrooms vertically populated by an identically-dressed ensemble-Lanark speaking in chorus to near-literal depictions of the church where Lanark is painting the ceiling.

Actually, I say “near-literal depiction” but of course it isn’t. No more than Simon McBurney’s stage at any point *actually* resembled a jungle or a study. Instead, the tall gantry here stands in for the scaffold Lanark uses to reach the ceiling, and you (I) find yourself filling in the church around it so vividly that you’d swear you’d seen it and could describe it perfectly.

(Similarly, Sandy Greirson’s performance is remarkable in precisely the same way. You'd be willing to swear it’s quite understated and he’s not really doing much *acting*, but, my God! How does anyone do that little and achieve so much with it?  It’s like alchemy.  It really is one of the finest stage performances you’ll see all year.)

It’s funny, re: the set  –  because after the Second Act (i.e. the first) I’d have sworn I thought the staging was quite sweet – that 70s Dr Who/Hitchhiker’s cheap set thing gets me every time – but was kinda wishing it had been designed by Robert Borgmann. But, no. There’s an inexorability and a logic to it, and also that very British love of narrative/story underpinning it. This emphatically *isn’t* conceptual in that way at all. It *looks* kind of mildly European, and there’s a fine bit of Pirandellan meta-theatricality later on too, but, no. Really, this is Scottish/British theatre doing what it knows best – telling a great story and essentially containing most of the metaphorical content *inside* that frame, rather than outside it.

I know I’ve agitated in the past for trying to open our island up a bit to other approaches, but Lanark (and The Encounter, actually) are both beautiful examples of times when we really don’t need to. When the idea of a story told “theatrically” is a more than satisfactory validation of another approach.

And, yes, Christ, that meta-theatrical ending. I’m not going to say what it is, or what happens, suffiice it to note that it does have a parallel in the book. But here it feels like Greig also well and truly makes it his own. And makes it not only about life and death, but also, powerfully, beautifully, movingly, about the possibility of Scottish Independence (I think). It suddenly gathers everything that the piece has always been about and ties it all together in a way that allows the audience, almost, to accept the inevitability of tragedy and sadness and death at the same time as our protagonist.

It is worth noting in passing that as far as is visible, the entire cast and creative team are white, and it’s very definitely A Man’s Story. Against this (and, yes, I know, shaky ground) in its treatment of a life’s struggles, I’d say it gets as close to being something that *anyone*/*everyone* could identify with as is imaginable. This is properly thrilling, epic story-making. It’s ambition feeling like a gift to the audience as much as anything. It’s theatre that makes the entire medium feel like a vast act of generosity.

I hope it tours bloody everywhere.
Posted by Andrew Haydon at 13:46