Shorts: Hamlet review is put back where PRs planned it 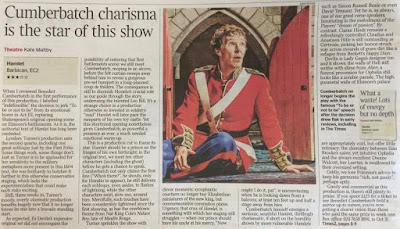 Did everyone who read The Times protest too much? Methinks no.

The writer of the new review of Hamlet has responded to criticism by trying to sound like less of a literal-minded theatrical hobbit, but to little effect...

And so on and so on.

The other reviews are faintly interesting, but all too short, and lacking any kind of real analysis beyond the fact that Benedict Cumberbatch is a great actor, so are the rest of the company, and that there is a big old set.

Billington’s review reads almost exactly like his review of Three Kingdoms, making me incredibly keen to see Hamlet, and very keen indeed that the Guardian stop sending him to any theatre that has any visual component at all.

Andrzej Lukowski’s is amiable and eminently sane and sincere, but sacrifices a lot of his wordcount summarising the ugly press bleugh around the production.

Meanwhile, over at The Stage, Mark Shenton has opted to deliver an excitable word salad instead of a review.

[Declaration of interest: Germany’s leading theatre reviews website, Nachtkritik, did commission a review from me, but apparently Premier PR, who were handling the press allocation, didn’t have any tickets – which I completely understand. I mean, the thing is sold out anyway, and every press ticket given away is 125 quid not recouped. And the financial value of stage semiotics appraised in German is probably not high. Commerce gets the critics it deserves, and all that...]
Posted by Andrew Haydon at 12:51